Thursday, February 2
You are at:Home»Features»Bringing back water polo glory in Sarawak
For the freshest news, join The Borneo Post's Telegram Channel and The Borneo Post on Newswav. 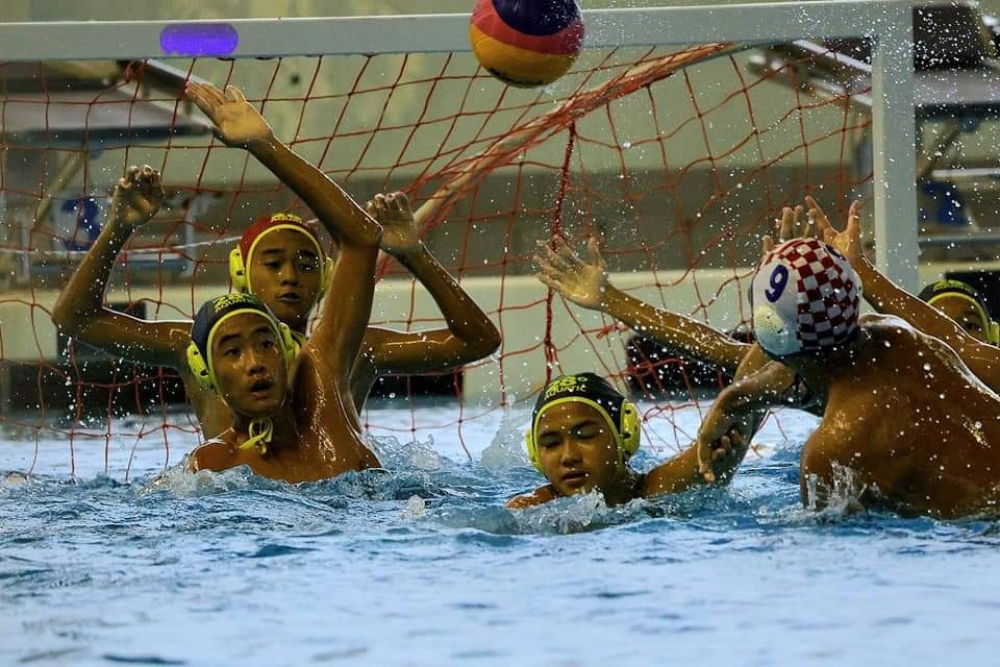 Water polo is a team sport, and is best described as a combination of swimming, football, basketball, ice hockey, rugby and wrestling.

SARAWAK was once the water polo powerhouse back in the 1980s and 1990s, recalled James Tan, the coach for the Srikl Sharkies Water Polo Team of Kuala Lumpur.

The former athlete remembered how strong the Sarawak team was back then, in that no player from other states could beat them.

“I remember Sarawak having a big pool of talented players. During the heyday, half of the national team consisted of Sarawakians

“But after 2000, the Sarawak team was suddenly gone. It was quite puzzling – nobody knew why they just got out of the picture,” he told thesundaypost when met on the sidelines of the inaugural Kuching Invitational Water Polo Cup 2022 tournament held at the Pandelela Rinong Aquatic Centre recently.

Tan then spoke about a memorable game during the 1989 SEA Games in Kuala Lumpur, back when he was in the national team.

“We fought extremely hard, but we lost the gold medal to Singapore,” he recounted.

Tan was among the coaches who came down to Kuching for the recent three-day event, organised and run by the Power Aquatics Swimming Club (PASC).

He was very encouraged by the hosting of the tournament, which gathered Under-16 athletes from Malaysia, Singapore, Indonesia and Taiwan. 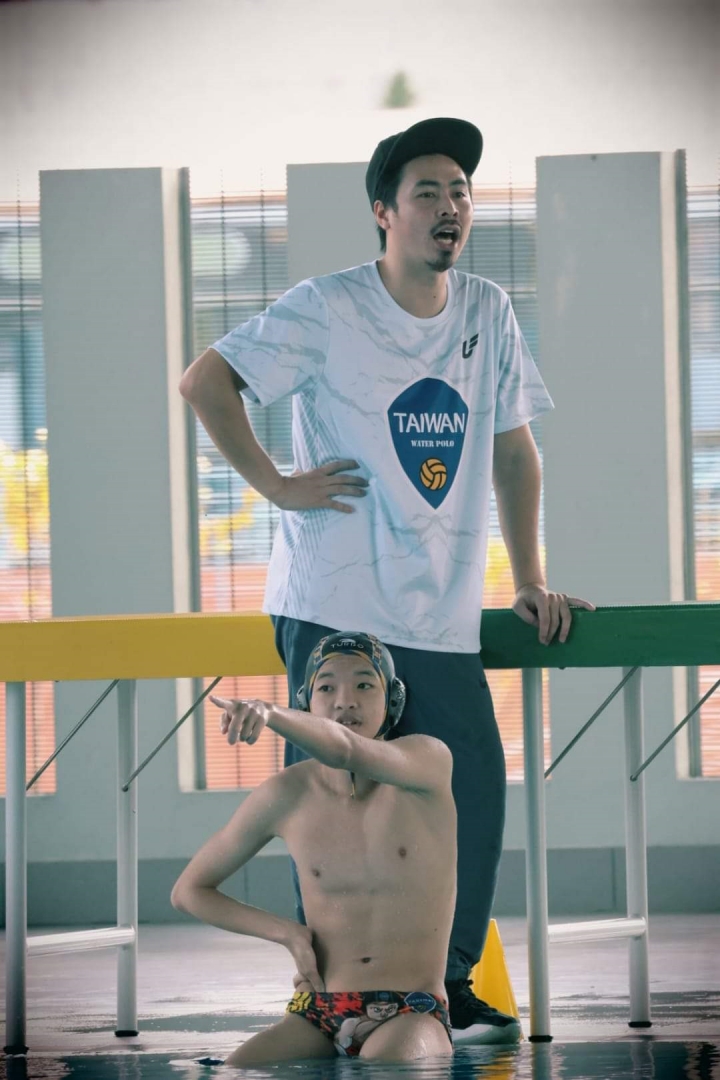 “This is the first tournament in Sarawak that we are taking part in after so many years.

“I’m glad to come back to Sarawak not only because of this sport, but also because I personally love Sarawak.

“My last visit here was just before Covid-19 pandemic struck.

“I commend the club (PASC) for organising this tournament. I believe it would bring glory back to the game in Sarawak,” said Tan. 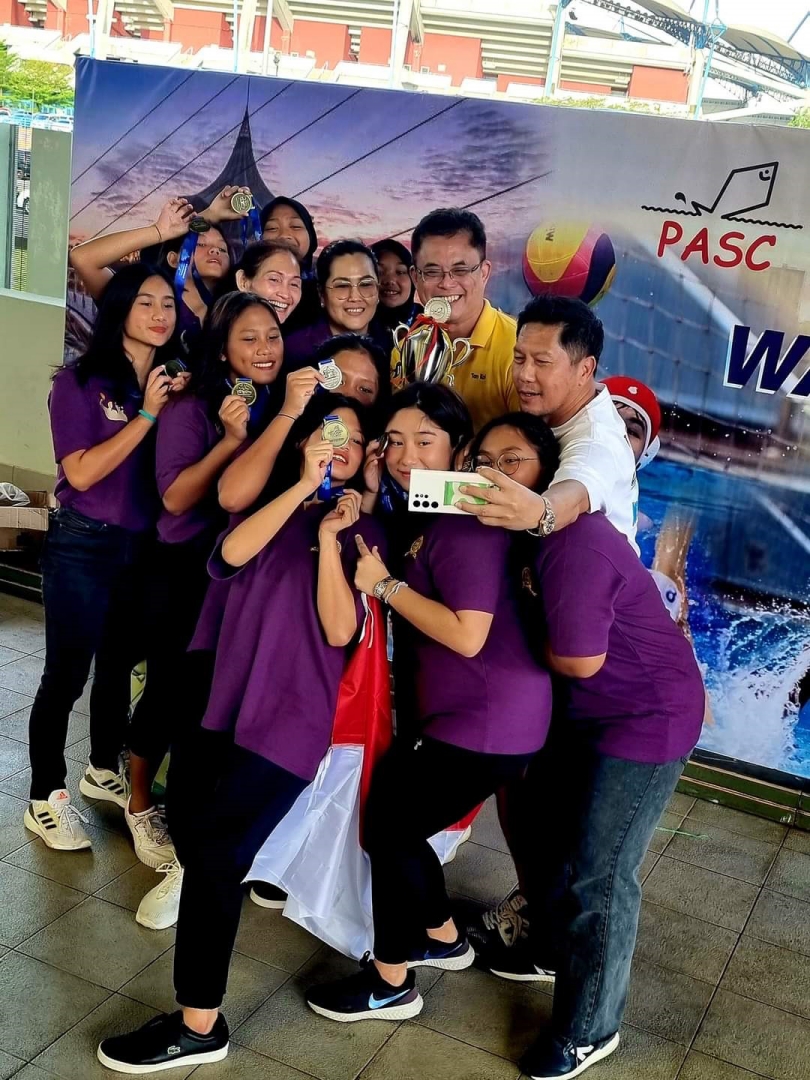 Political secretary to the Premier of Sarawak, Tan Kai (back, second right), joins PASC president Kapitan Tan Kun Gee, on his left, in a wefie with members of the Kusuma Harapan Indonesia women’s water polo team, who won their category at the Kuching Invitational.

Gyasi Parikesit, an assistant coach for Kusuma Harapan Indonesia, said he was very impressed to see the high-standard aquatic sports facilities in Sarawak.

On the tournament, he was pleasantly surprised by the number of participating teams.

“I’m really surprised to see the high number of junior teams involved in this sport in Malaysia compared with Indonesia, where there are probably only five or six active junior teams.

“So to see up to 12 junior teams competing here is something that awes me, and it also gives me a good feeling.

“It must also be a very delightful experience for the kids. We are learning something new here and are looking forward to coming back soon.”

Coach Lo Miao of Taiwan Water Polo Team said this was their first tournament overseas after the relaxation of Covid-19 restrictions, and thus, everybody was very excited and happy to be in Kuching.

“The pandemic had badly affected our training for two years,” he said.

On his charges, he said many of them were introduced to water polo at age 10.

In this respect, he said they would conduct full training on weekends so as to not interfere with the young athletes’ studies.

That said, they had gone all out in their preparations for the Kuching meet.

“When we heard about this Kuching Invitational, we got very excited.

“The youngsters underwent three months of gruelling training to be prepared for this competition.

“Many of them playing overseas for the first time.”

Lo said upon returning to Taiwan, they would apply what they had learned during their stint in Sarawak.

“The water polo rules are among the things that we have learned here.

“In Taiwan, we don’t have many water polo teams, so our players’ exposure to the game is rather lacking.”

Lo revealed that a lack of funding and support from the government was among the reasons why water polo was not popular in Taiwan.

“Therefore, it’s quite hard for us to produce good results. So, I hope that through this (Kuching) competition, our players can prove their worth and get noticed more.

“Our time in Kuching has given us a valuable new experience, and also the opportunity to build a larger network.”

Lo also said he was ‘wowed’ by the standard of the aquatic sports facilities in Kuching.

“Initially, I did not expect that.

“I also love the weather here, and the traffic jam is not as bad as in Taiwan.

“We are looking forward to joining another competition in Sarawak, and we are also thinking of holding an invitational too,” said Lo. 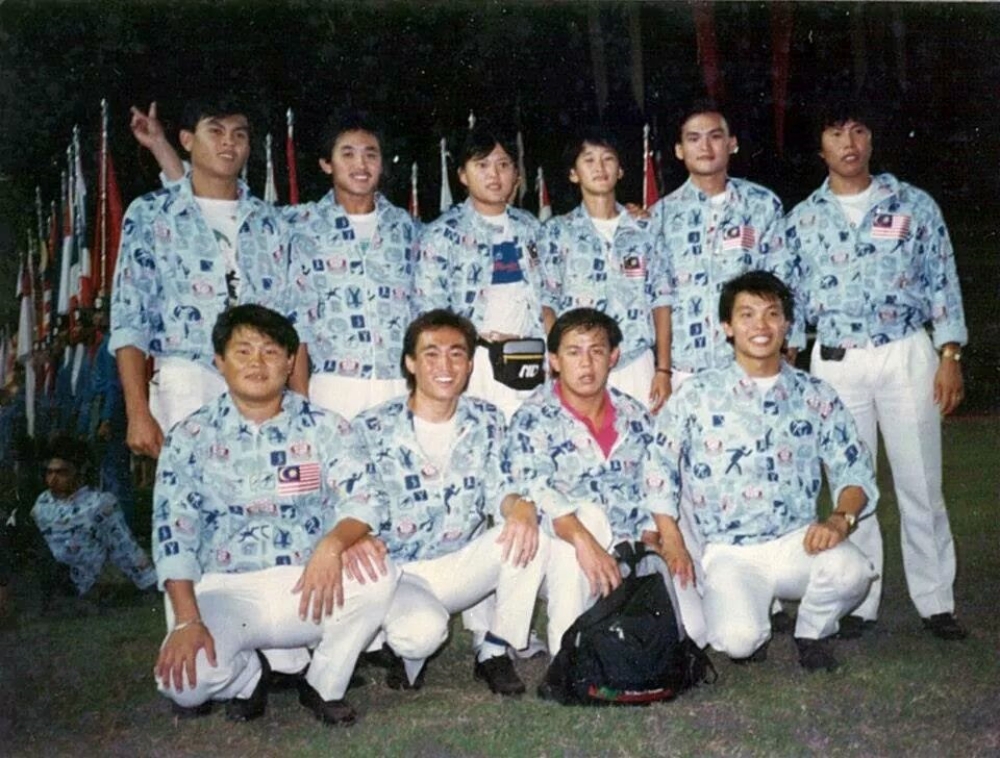 Like the other visiting coaches, Ting Wai Piew was also singing the praises of the facilities at Pandelela Rinong Aquatic Centre in Kuching.

The coach, who started out as a player for Pacer Water Polo Academy Singapore in 2012, described the whole set-up as ‘superb’, especially with it having a referee platform.

“In Singapore, there would not be any referee platform unless it is a major tournament.

“Wah! It’s so nice to come here for a competition after the pandemic restrictions have been relaxed.

“I’m full of pride seeing our team play here, and I think they have performed very well.

“It is really a good exposure for them. If only this invitation had been given out much earlier, surely there would have been more teams wanting to take part.”

On water polo in Singapore, Ting said it had gradually become one of the popular sports in the republic, with several local competitions being held, aimed at attracting more young players.

“I hope that for Singapore, a water polo competition would become as well-scheduled as the annual event in Kuching, so that it would be easier for us to do the planning.”

In his remarks, the organising chairman of the Kuching Invitational, Voon Yong Hui, said the key objective was to revive the interest in water polo in Sarawak.

He acknowledged that water polo was a demanding sport, but assured that it was not as ‘dangerous’ as perceived. 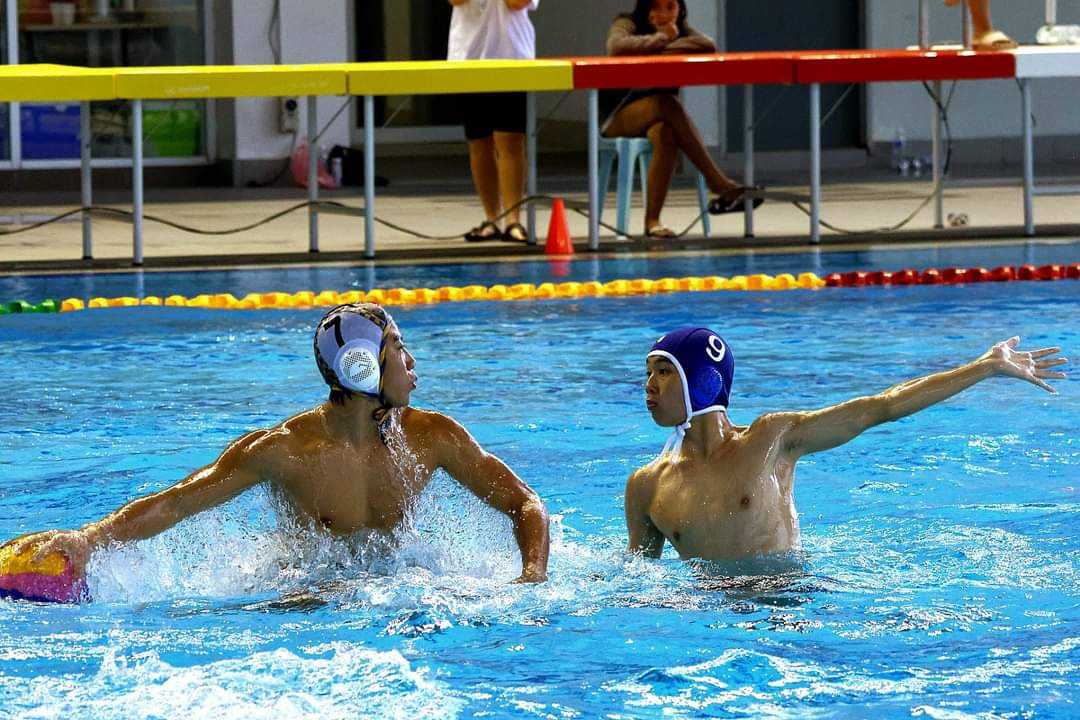 Water polo can be best described as a team watersport that combines the elements of swimming, football, basketball, ice hockey, rugby and wrestling.

“Water polo is a team watersport, which can be best described as a combination of swimming, football, basketball, ice hockey, rugby and wrestling. It provides a wonderful complement to swimming. The game helps build strength and endurance.

“It provides an excellent opportunity to stay in shape when you’re learning to swim and for those already into competitive swimming, it works as a much-needed break from all the rigours of training.

“I’d say water polo helps maintain the interest in swimming for some athletes who otherwise may feel like quitting the sport,” he said. 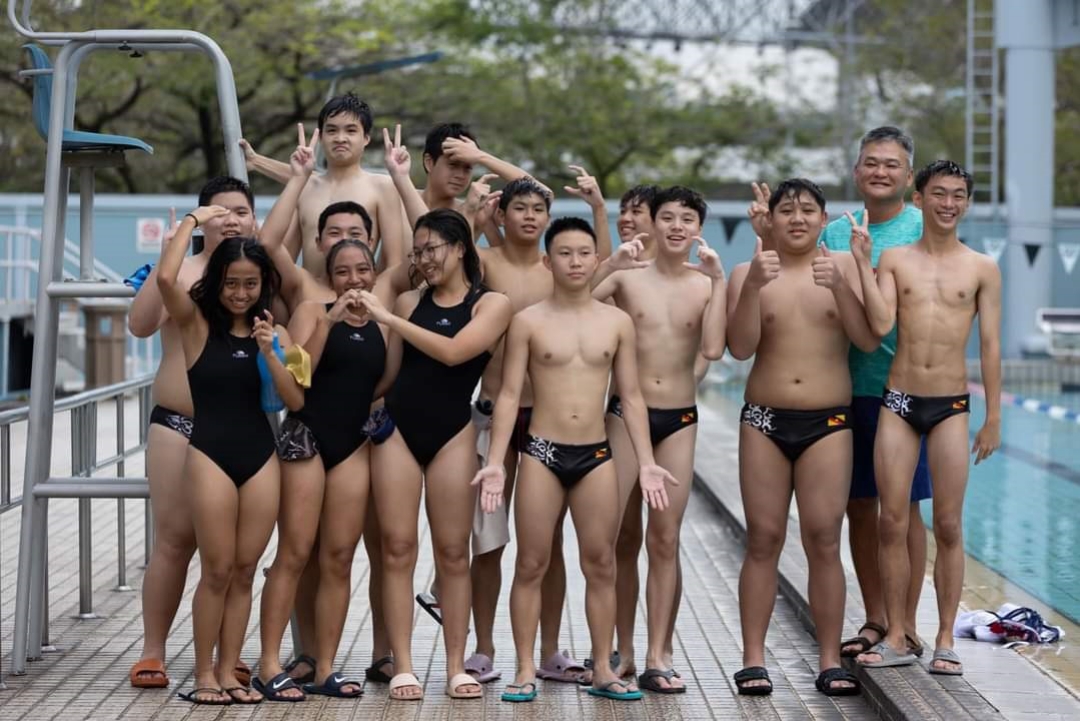 Voon (back, right) with his young charges, all of whom are Kuchingites.

Adding on, Voon was happy that the inaugural Kuching Invitational Water Polo Cup tournament had run smoothly and in this regard, he expressed appreciation to the Sarawak Sports Corporation (SSC) and all those who had been supporting the organiser all the way.

“The competition was like a huge celebration for aquatic events, and for the first time, the Women’s Open and Men’s Under-16 water polo championships had taken place in Kuching.”

Recalling his days as a state water polo athlete, Voon hailed Sarawak as ‘a superstar in water polo in those past years’, having won the National Open Championship title 16 times in a row.

The last time the state team won gold medal was at the 1990 Malaysia Games (Sukma), which was hosted by Sarawak.

The late 1990s, which was plagued by economic crisis, also marked the starting period when Sarawak no longer took part in any competition.

Several reasons were cited for the period of stagnation after 1999, the foremost of which was the lack of support from the government, and also from the public.

The heyday, it seemed, had ended, putting water polo in a position that made it a sluggish struggle for the sport to recover.

Still, Voon remained optimistic about the future of the sport in Sarawak. 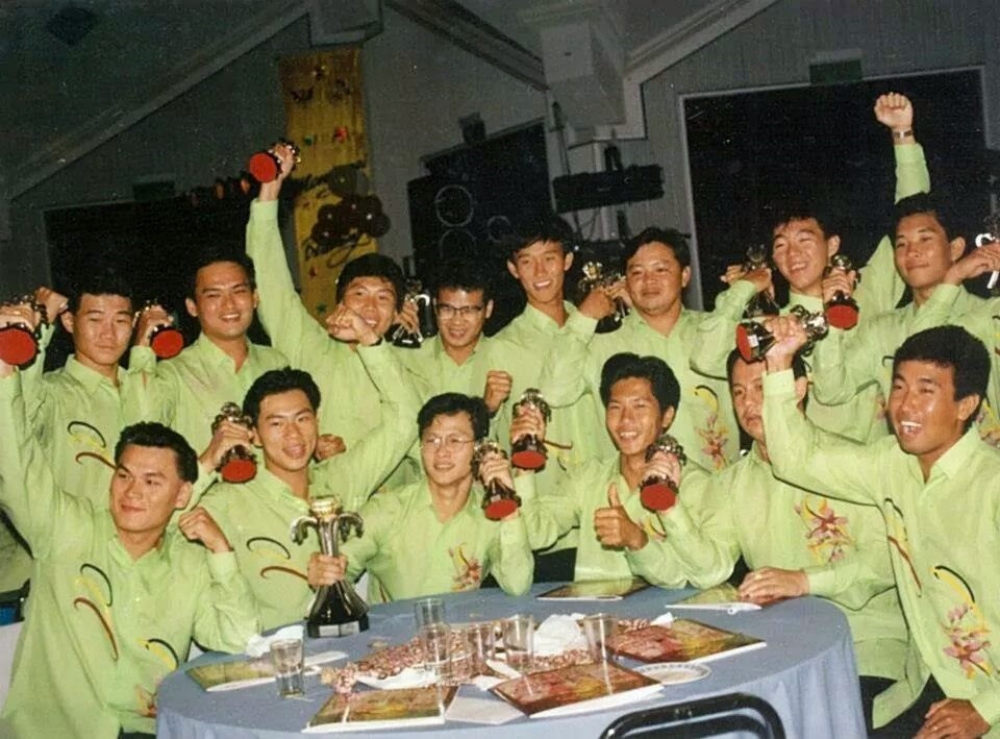 In 2014, he teamed up with Chin Khoon Siang and Heath Cahalan, an Australian who was teaching at a private school in Kuching, to revive water polo.

Chin was the state coach in the early 1980s before Voon took over, while Cahalan played for Wagga Wagga in Australia and had toured New South Wales for competitions.

It was a very challenging undertaking, however, as they could not even get a water polo class going due to being unable to secure a proper venue and they could hardly gather enough students to enrol.

“One problem was the lukewarm response from the swimming associations due to fears of losing their swimmers to water polo,” lamented Voon.

On the ‘sluggish’ development of water polo, he opined: “It’s mainly due to the lack of support from the relevant authorities. It could be that the sport is ‘too expensive’ to be funded, in view of it being a team sport, not an individual sport.”

It was this very reason that Voon established the PASC.

“The key goal is to establish a Sarawak water polo team. That’s why I started the PASC.

“It’s my hope that it could attract more people into swimming, and from there, to eventually gather enough potential talents to be trained as water polo players,” he said.