Friday, February 3
You are at:Home»Features»Janggu: Passionate about his roots
For the freshest news, join The Borneo Post's Telegram Channel and The Borneo Post on Newswav. 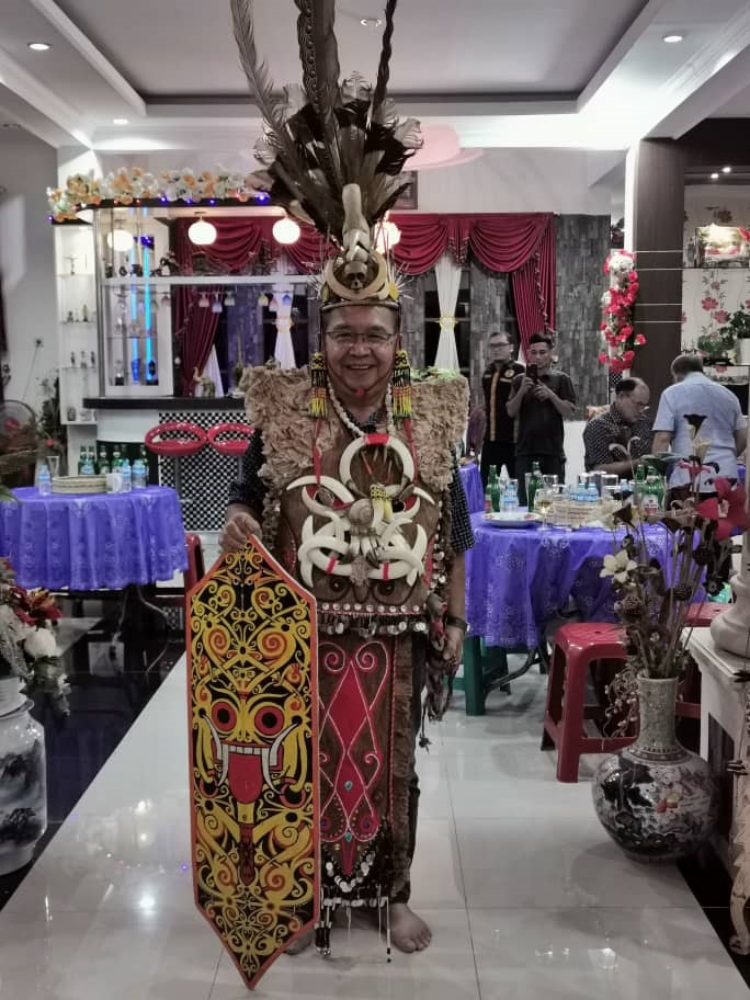 Photo shows Janggu, in traditional attire, during an event.

TEMENGGONG Datuk Janggu Banyang is a man who is passionate about his roots, his culture, as well as the legends and folklores of the Iban community.

But he does not just know and listen to the stories – he makes it a point to find out the sources.

Coming from a very distinguished lineage of warriors and ancestors, he is indeed well versed in the Iban ‘adat’ (customs).

“I went to Kalimantan myself to find out how true those stories were. And indeed, I was not disappointed,” says the Iban paramount chief of Sibu Division, who hails from Julau where his ancestors had established their settlement more than 100 years ago.

It was in the 1990s when an aunt from Kalimantan side (Janggu’s grandfather had married a Mamaloh woman from there) came all the way to Julau to see his family and relatives. This marked a significant moment for him not only because it was the beginning of the reconnection of families from both sides of Borneo, but it also sparked the interest in him to chart out his lineage from Kalimantan.

In the last 20 years, Janggu has written articles about his roots and many cultural features, which he had learned first-hand. He has also made many personal trips to Kalimantan by land.

In 2017, he was invited to a special Dayak cultural tour where he was one of the leaders – the other being former commander of the Eastern Field Command, Lt-Gen (Rtd) Datuk Stephen Mundaw.

The river cruise along the Kapuas involved 62 participants from Sarawak, Sabah, Brunei and Indonesia, all of whom boarded a specially-repurposed vessel called ‘bandung’ (houseboat) and the point of departure was at Badau, a town just across Lubok Antu.

Born in 1947, Janggu went to a Roman Catholic mission primary school in Julau and after that, continued his studies in Sacred Heart School Sibu.

He entered the business world at a very young age – he is now on the board of directors of the CCK Consolidated Holdings Bhd.

Nonetheless, he also enjoys tending his own nursery in Julau, where he has planted rubber and durian trees.

“This nursery keeps me very fit and active,” he smiles.

His father, the late Temenggong Dato Sri Banyang Janting, was a Brooke-era taxidermist who had worked in the Singapore and Sarawak museums. Being one of the few educated Ibans at the time, Banyang later became a Member of Parliament for Julau, and also member of the Sarawak Council Negri. He was also among the founders of Parti Pesaka Anak Sarawak (Pesaka), a wing within the Parti Pesaka Bumiputera Bersatu (PBB) – the backbone party of the state’s ruling coalition, Gabungan Parti Sarawak (GPS).

According to Janggu, his Kalimantan journey proved to be successful as he found his relatives in the Upper Kanyau area there.

He is still inspired by how the Dayaks from Kalimantan had walked across the border, through the thick jungles and terrains to look for their blood relatives and in this regard, he says the Dayaks of Sarawak, the Ibans in particular, should also strive to trace their lineage.

“Today, tours can be organised, and the roads are very good. Plus, with good Internet and other forms of communications, it would be very easy to trace one’s family origins.”

He still remembers how he had successfully traced his aunt, who was a ‘sabak’ singer, back in 2012.

Elaborating, he highlights the importance of the role of a ‘sabak’ singer in the belief of the Ibans in Sarawak.

“The Ibans believe in the nature of death and the afterlife. They all believe what they have heard from the older generations about the customs and also the taboos set by ‘The Creator, Petara’.

“The ‘Tukang Sabak’ is regarded as an expert, one playing an important role in sending off a soul to a suitable place, where it’s supposed to be.

“The ‘Tukang Sabak’ would also use a number of significant tools or artefacts during the ‘Nyabak’ (‘weeping’) ceremony.”

Talking more about his numerous trips to Kalimantan, Janggu says he has found many aspects of the Iban culture are real, not just hearsay.

“Take the ‘Batu Tenung’ as example. Found in River Mandai, the ‘batu’ (rock) is real, and it is a measurement or a prediction of life.

Another feature that he speaks about is the ‘Ensurai Ranjing’ (a tree of the genus ‘Dipterocarpus’; in Malay, it is ‘keruing’), of which leaves bend towards the pebble banks in Ulu Mandai. The souls of the dead must pass through the ‘Ensurai Ranjing’ to Bukit Mandai, where the leaves of the ‘ensurai’ would serve to ‘test’ them. If a soul could not pass the test, or if it became ‘scared’, it would return to the body, and that person would wake up,” he recounts.

Must visit places in Kalimantan

“All those who are interested in such features should visit Kalimantan to see them,” adds Janggu whose longhouse, Rumah Jana of Batu Matop in Julau, is full of heirloom items and artefacts such as vases and ‘Pua Kumbu’, all beloved by him and his family members. 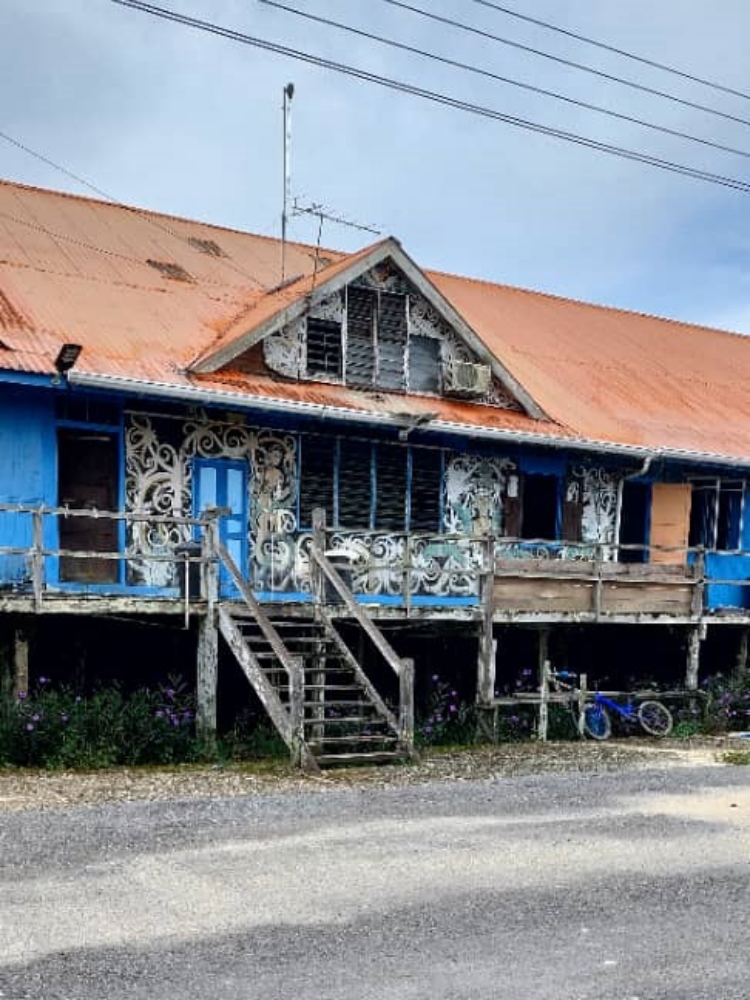 He has a great fondness for Sintang, an autonomous region in West Kalimantan that will be the first stopover for the proposed 2023 Cultural Cruise.

It is said that Sintang originated from the union of a Hindu Javanese Prince Aji Melayu and a Dayak Princess, Putri Jungung Bui @ Dara Juanti. A few generations later, the royal family embraced Islam and took up Muslim names.

Janggu also highly recommends the famous exhibition centre in Sintang that should not be missed. There, the visitors can study the similarities and differences between the Pua Kumbu weaving in Sarawak and that of Kalimantan.

“This eye-opening visit would help raise the awareness and appreciation of the cultural traditions and arts – perhaps, some new ideas could be brought home to Sarawak.”

He also quotes his friend, Salam Chimie who is one of the developers of Kapuas River Cruise, as encouraging the travellers to study Kapuas Valley, which continues to be a significant agricultural area especially for padi planting, which is the chief occupation of the people there.

“The Dayaks over there (Kapuas Valley) continue to maintain their farming systems and stay close to nature.

“They still have a ‘Kepala Adat’ (Head of Customs) or Temenggong who advises them about farming and the accompanying traditions.

“Nothing is wasted, and no forest is cleared rampantly. Fines would be imposed on farmers who go against the ‘adat’. It is through this way and the natural forests would continue to be preserved, and a good balance would be maintained.

“Farming, to them, is a spiritual, economic and social activity. It has always been a part of the sustainable life since time immemorial. Even the very young Dayaks in Kalimantan have already uphold rice cultivation, and they would continue to do so until they grow old.

One of the longhouses situated along the Kapuas River, over the Kalimantan side.

According to Janggu, the first cruise in 2017 used a larger ‘bandung’, but the second cruise would make use of two new houseboats.

He says among the travellers, Datuk Thomas Akin is the most enthusiastic about travelling on board a ‘bandung’.

“I’m glad that Datuk Thomas, a learned judge, sees travelling via ‘bandung’ as a dream come true. He’s able to relax with his friends on board, eat good food and enjoy the scenery along the Kapuas – a very ideal way of spending a holiday.”

Janggu also speaks about a medical doctor, Dr Ismawan Adrianto, being especially recruited for the first cruise to attend to the travellers.

The Temenggong added: “The late Yuwano Kolopaking flew all the way from Jakarta to join the cruise, which departed from Lanjak. He was the famous engineer and entrepreneur who built the Pontianak Bridge across the Kapuas River, a great landmark of Pontianak.

That first cruise also had two members of ‘TVRuai’ of Pontianak, who had covered all the activities up until the last day.

“It was really good that the tourists enjoyed themselves being filmed at the time, whether during dining time, during singing and dancing, and also during the stopovers Sintang, Betang Ensaid, Bukit Kelam, Sekadau, Sanggau and Kubu Raya, before finally reaching Pontianak,” says Janggu.

Meanwhile, Janggu’s friend Salam has unveiled the 2023 itinerary for the cruise, which will retrace most parts covered in the maiden voyage of 2017.

This March 10 will mark Day 1, where the travellers would leave Kuching for Lubok Antu by bus, followed by a speedboat ride across Danum Lake to reach Simitau, from where the cruise would depart for the all-night journey to Sintang.

Day 3 is listed as a bus trip to Sekadau, with a brief stop at Taman Kelimpau (Gibbons Park). From Sekadau, the participants would board the ‘bandung’ bound for Sanggau, set to depart at around midnight.

Just like the Sintang route, the ‘bandung’ is expected for disembarkation at Sanggau around dawn on Day 4. For this part of the itinerary, the participants get to visit Sabang Merah, Pusat Damai at Bodok, the famous ‘Paroki Katolik’ (Catholic parish) established by Fr Fritz Budmiger from the Swiss ‘Rolex’ family, and also Pulau Tayan.

The night houseboat travelling continues, with arrival around dawn at Kubu Raya on Day 5. There, the visitors would check into Mercure Hotel and after that, they could go for outings to the many museums in Pontianak, including one dedicated to the orangutans.

Day 6 would still comprise a Pontianak city tour and a night stay before returning to Kuching the next morning. 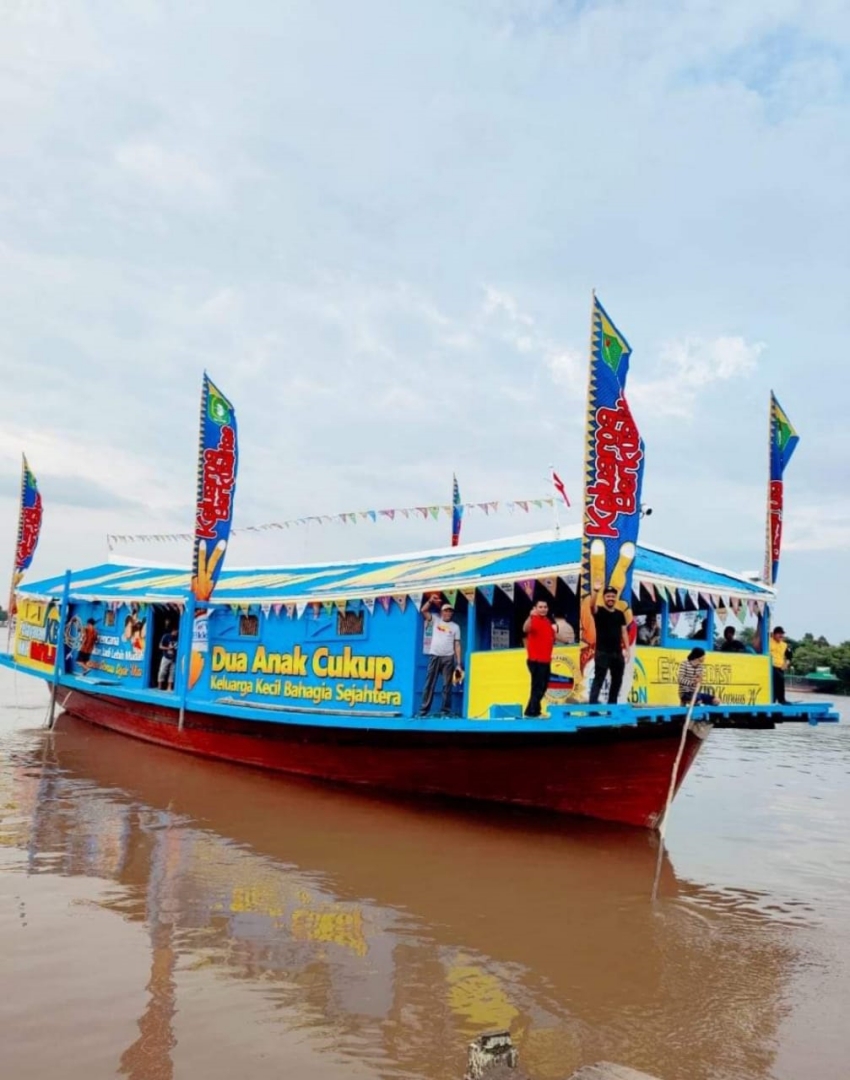 Passengers gesturing thumbs-up while on board one of the two ‘bandung’ units slated for the 2023 Cultural Cruise, to be led by Janggu in March.

Pak Ikey, a university graduate, has inherited two units of ‘bandung’ from his late father. The family business is based in the Selimbau village, Kapuas Hulu.

According to Pak Ikey, these vessels have often been used by the government agencies of the Kubu Raya Regency and their counterparts from other provincial governments for events in Kapuas.

“The participants taking the cruise are fully covered by travel insurance. However, they are also encouraged to buy their own insurance coverage.” 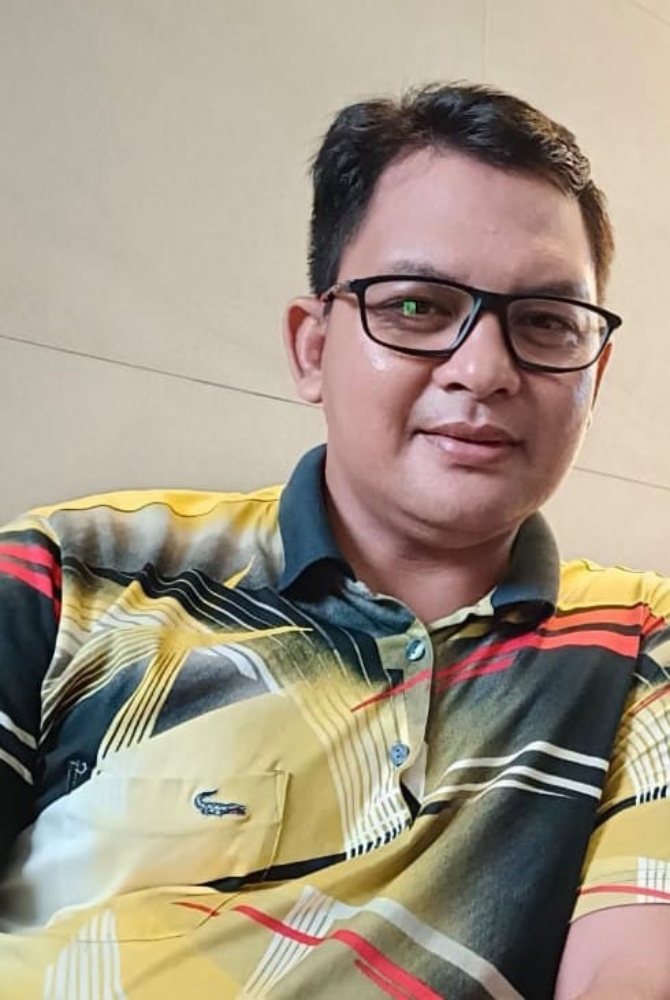 The ‘bandung’ owner Pak Ikey, who is based in Kapuas Hulu.

In his parting remarks, Janggu is hopeful that the 2023 Cultural Cruise would not only be an enjoyable experience for the participants, but also a beneficial and enriching one as far as knowledge and understanding of the Kapuas region goes.

“I, for one, am most happy to share my knowledge with them. I encourage every Dayak in Sarawak to at least go for one trip to the Kapuas, and to see for themselves all the places where their ancestors had come from,” he smiles.