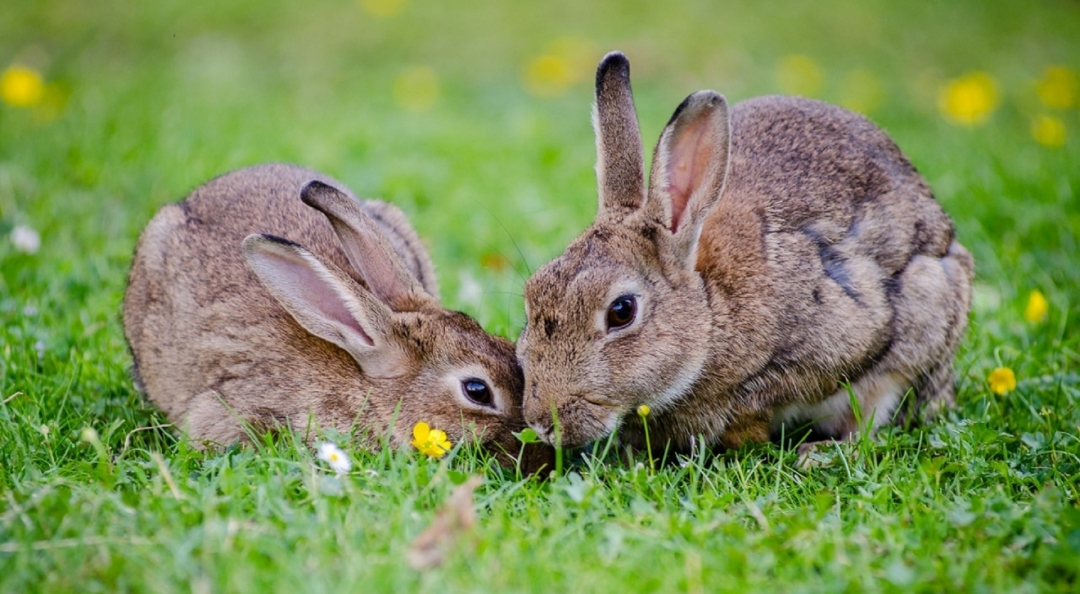 The European rabbit is probably the most common species of rabbit worldwide. – Photo by Jean Beaufort/publicdomainpictures.net

THE second line of this World War II song by Noel Gay and sung by Flanagan and Allen goes “Here comes the farmer with his gun, gun.” The significance of this will be seen later. I first came across rabbits at an early age when receiving a Christmas present in the form of a book entitled ‘The Tale of Peter Rabbit’ by Beatrix Potter.

This book was first published, as a trade edition, 121 years ago. In my memories eye, I can still see the cover of the book showing Peter Rabbit gnawing on a carrot in Mr McGregor’s vegetable patch. A few years later, my parents gave my sister and I a pair of pet Dutch rabbits. Mine was a buck called ‘Butch’, who bit and scratched my hands every time I fed him. He was far from ‘serene and gentle’, as the Chinese astrologists suggest as the main characteristics of one born in the Year of the Rabbit.

With Chinese New Year shortly to dawn, the sages suggest that this year should be the time to heal wounds and reacquire, both individually and collectively, an inner balance with tolerance of others. It is the year of spiritual settlement. This particular year is the Year of the Water Rabbit – water being the main source of energy throughout 2023. I am somewhat confused, for of the 21 species of rabbit globally only two varieties are strong swimmers – the marsh rabbit and the swamp rabbit.

Over 50 per cent of the world’s rabbit population lives in North America but rabbits are native to South Western Europe, South Eastern Asia, Sumatra, selected Japanese Islands, and in some regions of Africa and South America.

This is probably the most common species of rabbit worldwide for it was distributed for its meat and fur around the globe by early venturers and traders. They are an alien species of mammal in Britain having been introduced there by the eleventh century Norman invaders. Prior to that they were native to Southern France and the Iberian Peninsula and taken to Italy by the Romans, who kept them in small, walled enclosures known as ‘leporaria’. It is thought that the Normans brought them to Britain from their kingdom of Sicily to be kept in enclosures known as ‘warrens’.

Often, the Normans chose offshore islands, there to construct these warrens as the rabbits would be safer from foxes and other potential predators such as human poachers. The earliest written reference to a rabbit warren in Britain dates back to 1176 AD on the Isles of Scilly very near to my birthplace in South West Cornwall.

In the early 1950s, the rabbit population had swelled to 100 million animals of which 40 million were killed each year for their meat and fur. This was just after the Second World War and food rationing still prevailed in Britain. I well remember eating magnificent, juicy rabbit pies cooked by my mother. Actually, the annual cost then for the damage rabbits cause to agriculture was not far short of RM250 million.

The rabbit population seemed impregnable as it was the most numerous of British mammals. This situation was shortly to change through the spread, by fleas and midges, of the disease ‘myxomatosis’.

This virus was first discovered in 1898 in Uruguay, South America and was used to control and eradicate wild rabbit populations. The symptoms of this disease include a watery discharge from the eyes and nose and a swelling of the eyelids with sudden death after two weeks of suffering. An epidemic of this broke out in Britain in 1953 leading to the deaths of 99 per cent of the rabbit population.

This virus had an indirect effect on the rabbit’s predators with the buzzard population in particular suffering a serious setback. Grass grew longer in meadows and fox raids on chicken coops and pheasant breeding farms became more frequent. Today, it is thought that many rabbits have become immune to this disease and in Britain it has become illegal to spread the disease as a means of rabbit control.

With its black-buff coloured coat and white undersides and white tipped, upturned tail, it measures about 41cm long and weighs between 1.4kg to 1.8kg. It is a social animal living in colonies or warrens in a variety of environments from sea level to mountains, digging its burrows on farmland, in marshes, sand dunes, moorlands, embankments and even cliffs. A warren is dug in a haphazard way with interconnecting tunnels, bolt runs and emergency exits. At breeding time, the doe digs a separate burrow called a ‘stop’, which she lines with hay, straw and fur from her own body.

Most female rabbits become sexually mature at three to eight months of age and they can conceive at any time of the year for the duration of their lives. The gestation period averages 31 days and the size of a single litter ranges from four to 12 ‘kits’. Thus, a female can deliver up to 60 offspring each year hence the term ‘breeding like rabbits’. The kits are born hairless, deaf, and blind with the doe visiting her stop once a day to suckle. She blocks the entrance to the stop to conserve heat and deter predators. The kits reach adult size after nine months.

Rabbits are herbivores, emerging from their warrens at dawn and dusk to feed. With well-established runways and communal latrines, each rabbit will eat about half a kilogram of fresh green food a day. They do extensive damage to young trees, by nibbling new shoots and bark, and also to cereal and root crops and grazing land. Feeding is by refection or similar to chewing the cud. Food is eaten and then excreted in semi-digested form as soft, moist pellets. These are eaten again and passed through the intestines to be fully digested with dry black pellets as the new excreta.

Natural predators include foxes, badgers, lynx, weasels, stoats, owls, buzzards, and even cats and dogs. The biggest predator of all is man through gassing, fences, shooting, snaring, and ferreting. Rabbits in Australia are such pests that landowners are legally obliged to shoot them.

Starring in literature and films 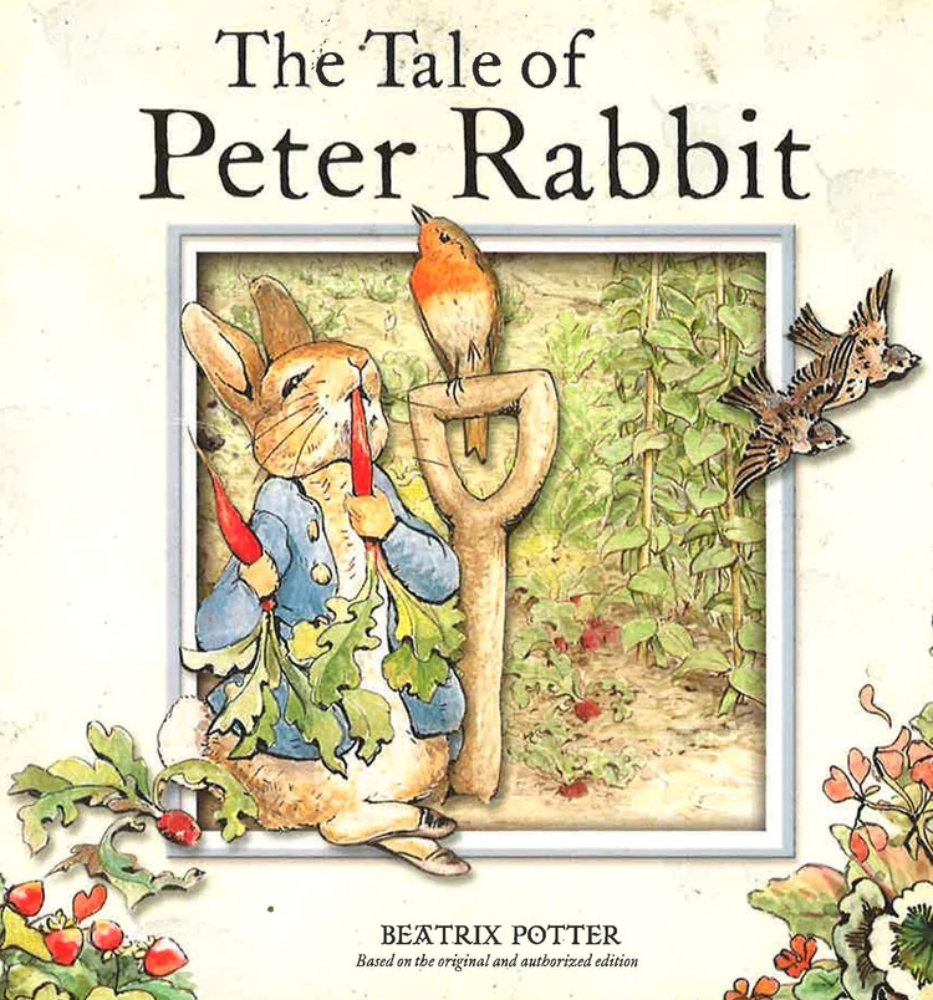 Beatrix Potter’s ‘The Tale of Peter Rabbit’ is one of the bestsellers in history and has been translated into 36 languages.

Besides ‘Bugs Bunny’ cartoons and Br’er Rabbit story books, where rabbits are viewed as amusing tricksters, they have appeared in such children’s books and films as ‘Watership Down’ by Richard Adams and in the previously mentioned Beatrix Potter’s ‘The Tale of Peter Rabbit’. The latter book is one of the bestsellers in history and has been translated into 36 languages.

The composition of Art Garfunkel’s ‘Bright Eyes’ is based on a rabbit. May I wish all readers a prosperous Chinese New Year in the Year of the Rabbit and a thought for those who keep a pet rabbit – I hope your rabbit is serene and gentle, unlike mine was!