Thursday, February 2
You are at:Home»Columns»Just another point of view»Memories of past Chinese New Years
For the freshest news, join The Borneo Post's Telegram Channel and The Borneo Post on Newswav. 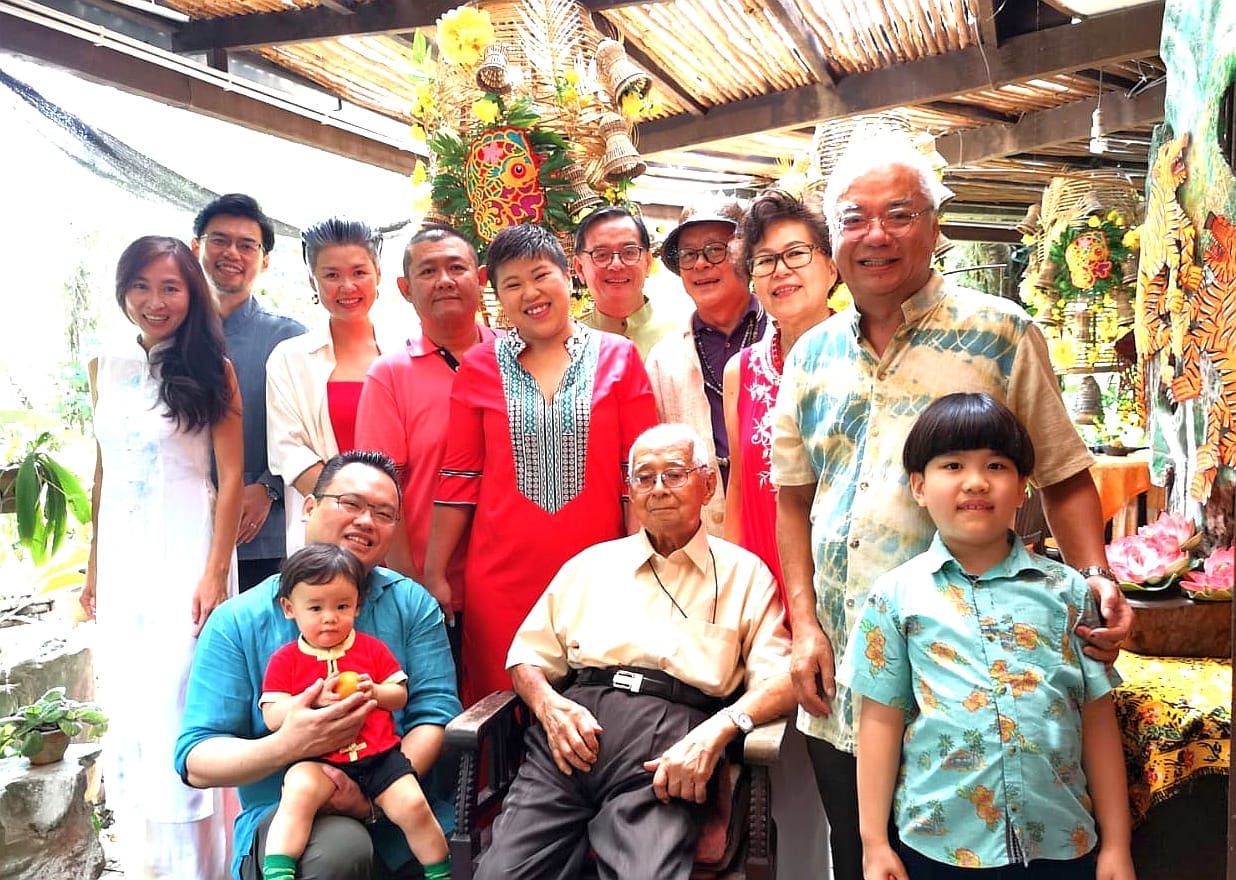 TOMORROW is the first day of the Lunar New Year on the Chinese calendar, which will be celebrated by more than 1.41 billion people – the world’s largest ethnic group being the Han Chinese, with Mandarin being the world’s most spoken language.

According to official statistics as at July 2021, there are 7.6 million Chinese in Malaysia, accounting for 22.8 per cent of the total population of 33.5 million. Regardless of their dialects or faiths, they will all be celebrating the Lunar New Year of the Water Rabbit and those born during this ‘Year’ would either be 12, 24, 36, 48, 60, 72 or 84 years old.

Chinese horoscope believers say that rabbits are ‘vigilant, witty, quick-minded and ingenious’ – in Chinese culture, the ‘Rabbit’ is supposed to be the luckiest of the 12 zodiac animals, in that it symbolises peace and longevity!

In China, since Thursday, they have seen the kick-off of the planet’s biggest migration of humans – hundreds of millions of people leave their cities in order to visit their families in the more rural parts of the country.

As a matter of fact, all of China takes a week’s holiday all at once, making it the biggest event on earth. The Chinese government had even given a statistic to the number of people who had travelled back in 2019 – a staggering 415 million! 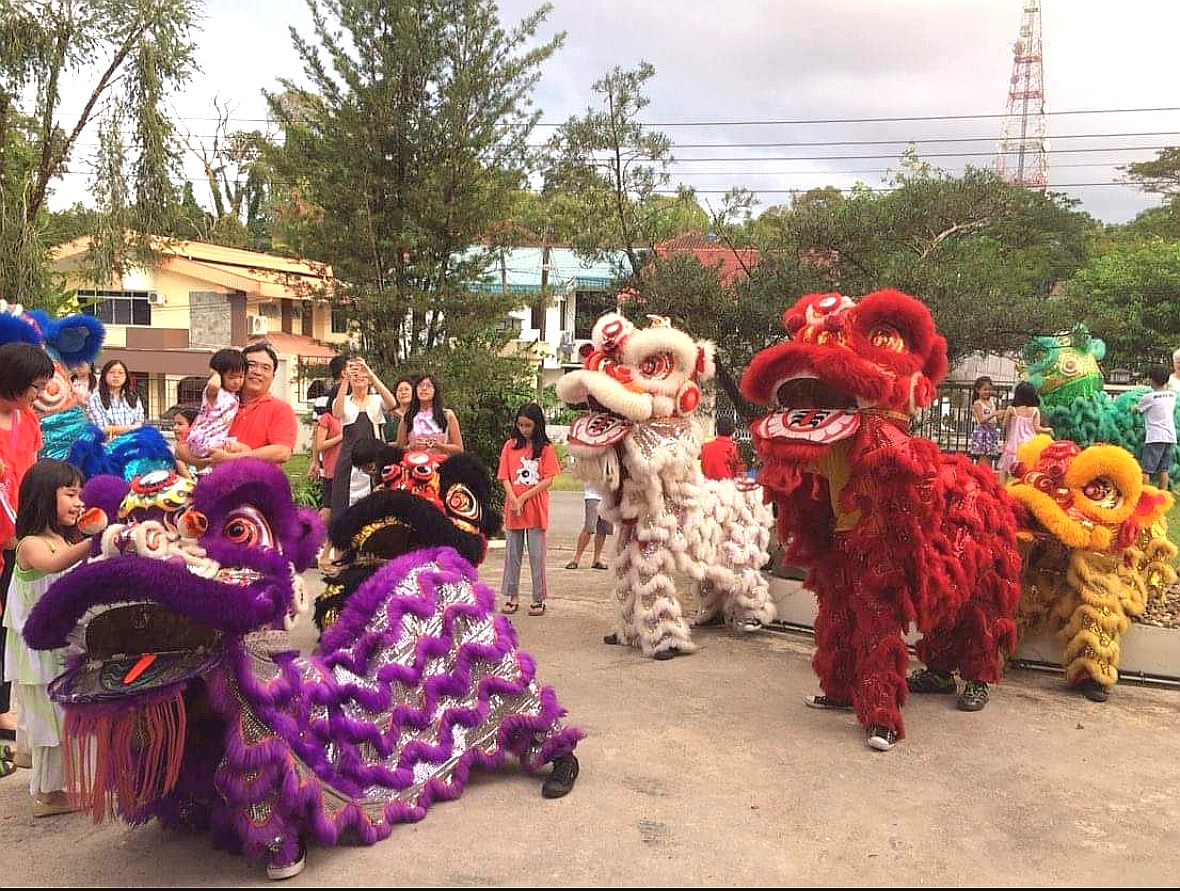 Lion-dancing being performed at the residence of Raymond Wee and Tan Soh Har in Kuching, in this photo taken in the 2000s.

Sarawak’s 619,900 Chinese (Economic Planning Unit Data: 2021) will be celebrating in the major cities and the smaller towns and villages scattered throughout the length and breadth of this region. The most obvious signs would be that a majority of the retail trade and general businesses servicing the food and service industries will be closed for at least three days, to a maximum of one week.

Many will be traveling either by going on holiday overseas or to return to their homes and visit their family elders. For a majority, there will be the traditional Chinese New Year Eve family reunion dinner, which is tonight.

In my own family, the Ongs, our traditions run deep and are strongly entrenched as part of our growing up period and has continued to this day. There will be long-held essential must-haves and things to do and traditions to uphold, which would have started up to a month earlier from the actual day itself.

Food, clothing, the home and entertainment – these are the most important aspects of most Chinese families preparation for the celebrations to ensure that the forthcoming new year will be lucky, fortuitous and will bring good health and abundant wealth to everyone in the family.

When it comes to food, the sky’s the limit – everything and everyone will contribute towards ensuring that the ‘Reunion Dinner’ meal will be abundant, extra special, extravagant and that there’ll be plenty of leftovers (for the following days when all kitchen work would have ceased!).

An invariable feast of many dishes and exotic foods, it would always involve the best abalones, bird’s nest, shark’s fins (I had personally seen to it that this particular dish was banned from the 2000s), suckling pig, roasted and braised soy five-spice duck, white pomfret, giant tiger prawns, sea cucumber, fish maws with meatballs, lucky vegetables like leeks and lotus roots, and many more.

In more recent years, we have added on other more versatile and non-traditional dishes like chicken curry, beef ‘rendang’, Mongolian lamb, Hakka pork belly with yam, Japanese salmon sashimi and so forth. Even that Cantonese custom of ‘Yee San’ has been so popularised and adopted into other dialects’ reunions due to it’s colourful ‘tossing of the salad’ and the boisterous communal ‘shout-out’ around the table to signify plenty and good fortune.

I remember that my Dad, being the head of the Fisheries Department, would always make it a point to ensure that there would always be a nice big delicious fish sourced by him to be on the menu. Certain years at Grandpa’s, we had roasted suckling pigs or a local young goat – one time I believe we had some horse steaks from my Grandpa’s stable at Sarawak Turf Club!

I also remember a goose or two, many occasions of extra chunky satays and ketupats, and many, many gammon hams.

Back in the 1950s, a couple of months before the big day, my mother would have gone out to buy textile material for her to do her own sewing (she owned a beautiful Singer machine) and us kids would be individually measured for her to sew us identical sets of pyjamas.

She would also sometimes sew new sets of window curtains for the bedrooms where we slept in during our years at Grandpa’s (1950-1958) and later, after our own house was built for our home.

Mother was so skilful at the Singer that with just the hardcopy patterns as guides, she could sew beautiful dresses too for my sisters, Edrea and Edwina.

After I had left home and started living on my own from age 20 onwards, I had stopped the habit of wearing PJs to bed, finding that a sarong is just the thing for me!

I don’t think there are any more parents nowadays who actually do their own sewing – I know for a fact, since I had a huge problem looking for hand-me-down sewing machines a few years back!

China, India and Bangladesh are to be blamed – because it is so much cheaper to buy off-the-rack or at bundle stores nowadays!

The other must-do and essential preparation for the Chinese New Year is to beautify the home: contractors and painters would be brought in to repaint both the exterior and interior of the house; the living room furniture would be replaced, restored or re-arranged; driveways and garages would be pressure-cleaned and washed thoroughly; the garden would be landscaped; and many new and flowering potted plants would be procured.

The home interior would be spruced up with new decorations – God forbid that visitors would see the same decorations as they did the year before!

No expense would be spared to order months ahead that special ‘kuih-kuih’ from that renowned and famous cake or cookie maker; nowadays all the popular ones would always say months ahead: “Sorry, can’t take any more orders” just to show off that they’re so much in demand.

Of course their prices would have leap-frogged multiple times as well… but who cares, huh? 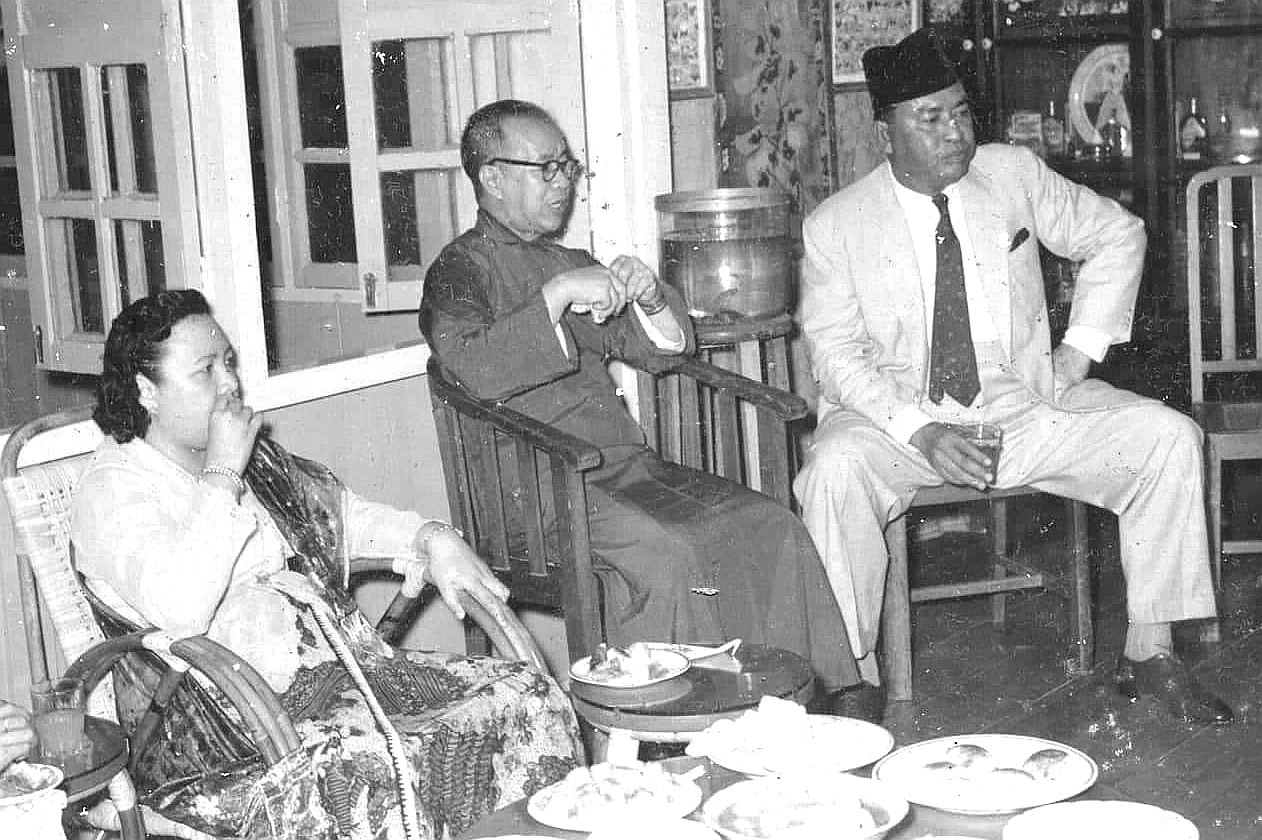 When I was a wee lad of 10, Grandpa Ong Kwan Hin would have sent out invitations (him being the Kapitan Cina and all) to all the top government officers, mostly the colonial expats in those 1950-1960s days, and community leaders and friends – and would have ordered for his regular gammon ham and Golden Churn butter and Coleman’s mustard in powdered form from Tan Sum Guan at Ewe Hai Street.

Grandpa Ong was renowned for serving his famous English-styled ham and cucumber sandwiches in a blend of butter and mustard mix to all guests who would come to pay respects over the two or three days that he held an ‘Open House’ at No 14, Ong Kwan Hin Road.

Visitors would throng in starting from around 10am, and it would last throughout the day.

By late afternoon when the official visiting hours ceased, my cousins and I would then partake of whatever leftover ‘famous Ong sandwiches’ gobbled down with whatever opened bottles of fizzy F&N drinks and Green Spot.

Grandpa’s regular bartender (borrowed from the Sarawak Turf Club restaurant) would entice us younger lads with small glasses of opened bottles of Becks Key beer or a wee drop of BGA (Hennessy 3-Star brandy with ginger ale and an ice-cube).

It had tasted somewhat like what my idea of ‘sin’ would be like (although in those innocent days, I wasn’t yet introduced to the concept of sin till many years later!).

As a lad, of course, my favourite memories would be the visiting of the family elders – and there were many – so we did collect a great many angpows (red packets filled with money).

We all had our favourites as in the mid-1950s, when a normal standard angpow would be 50 cents; so $1 note would be a jackpot!

Certain houses would offer really great food and cakes: my most memorable has to be cousin Angela and John Chan’s parents’ house where the cheese-straws were yummy; and my grand-uncle Tiaw Sian whose wife made the most delicious ‘kuih pai-ti’ (little crusty cups filled with ‘Nyonya popiah’ fillings). 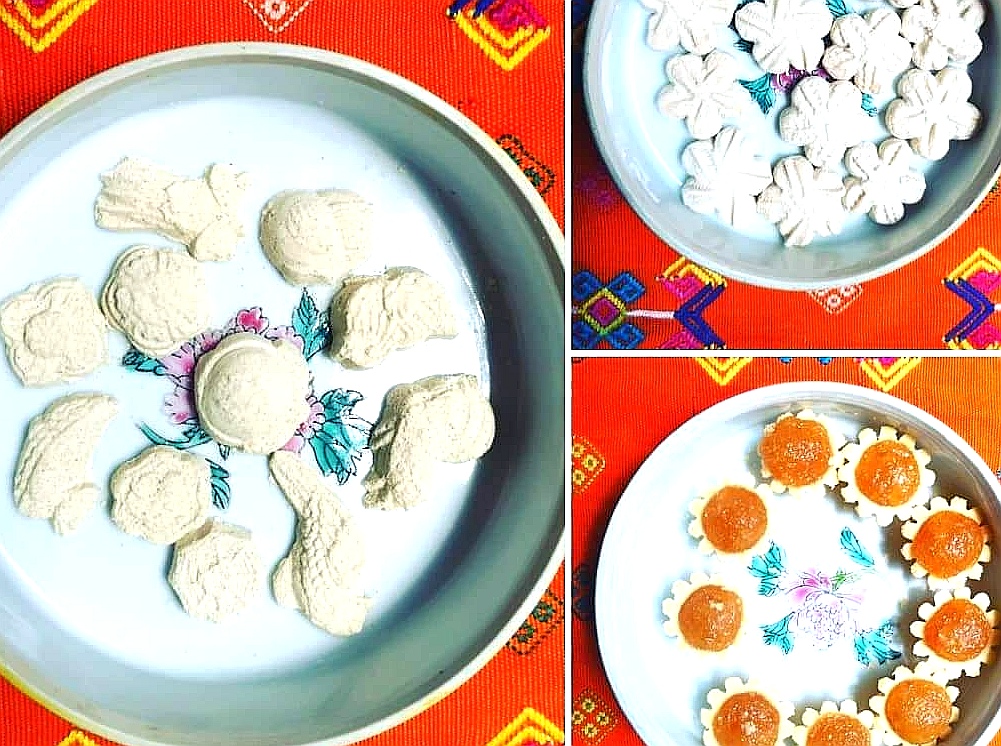 Among the must-have Chinese New Year treats such as ‘kuih bangkit’ and pineapple tarts. — Photo by Edric Ong

Chinese New Year will always stir many nostalgic memories, especially of loved ones now no longer with us. This year will be the first we would be spending it without my father gracing the family reunion dinner table tonight.

We will gather in his memory and we will remember our wonderful and loving years as a family and the many past Chinese New Years that we were fortunate to have spent with him. 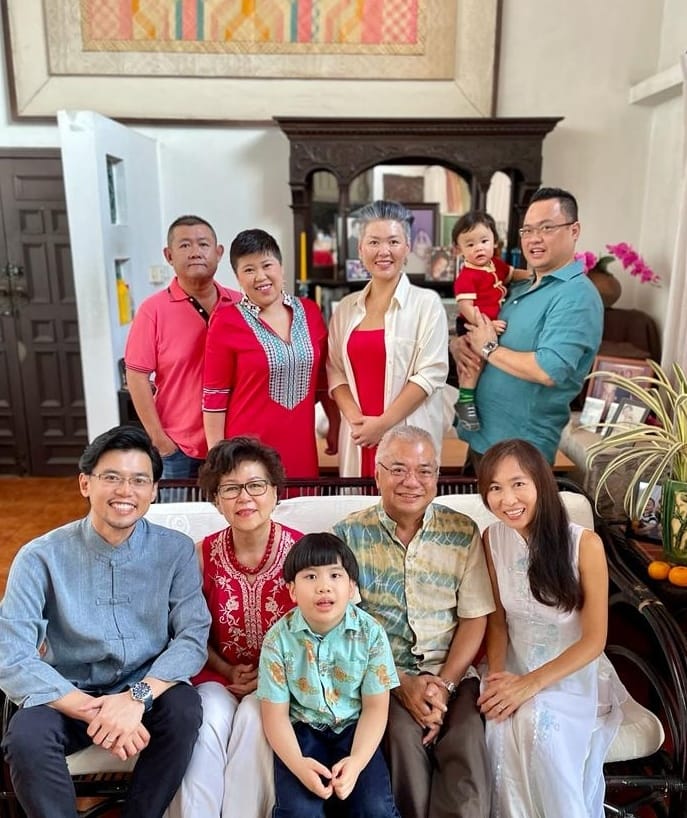 Photo from the album shows the family of the columnist and his wife Doreen Then (seated – second right and second left, respectively).

I take this opportunity to wish you all who are celebrating: Gong Xi Fa Cai.

May you continue to enjoy good health, happiness and good fortune throughout the ‘Rabbit Year’ ahead.

Previous ArticleA dream still worth pursuing
Next Article ‘Within the Four Seas, all are brothers’