Thursday, February 2
You are at:Home»Sports»Football»Arsenal silence doubters with statement win over Man Utd
For the freshest news, join The Borneo Post's Telegram Channel and The Borneo Post on Newswav. 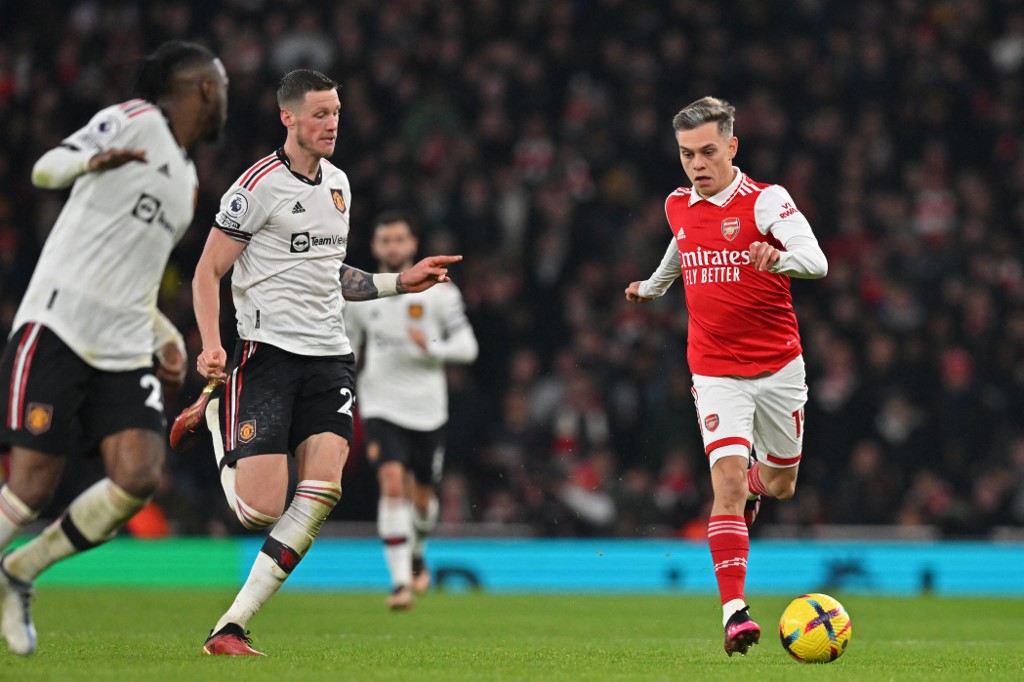 Arsenal’s Belgian midfielder Leandro Trossard (right) runs with the ball during the English Premier League football match between Arsenal and Manchester United at the Emirates Stadium in London on January 22, 2023. – AFP photo

LONDON (Jan 23): Premier League leaders Arsenal have had their title credentials questioned all season but their last-gasp win against Manchester United has silenced many of the remaining doubters.

Eddie Nketiah scored the winner in the dying moments of a pulsating match at the Emirates on Sunday as the home fans were infused with fresh belief that this could be their year.

The game against in-form United was seen as a critical test for the Gunners, especially after Manchester City closed the gap at the top of the table to just two points earlier in the day.

It was a challenge they did not fluff, hitting back hard after conceding the first goal, scored by Marcus Rashford, and staying calm after Lisandro Martinez cancelled out Bukayo Saka’s strike in the second half.

Arsenal, who have made their best-ever start to an English top-flight season, now have 50 points after 19 games — five clear of defending champions City with a game in hand at the half-way point of the campaign.

“I don’t think it gets much better than that,” said a buoyant Arsenal coach Mikel Arteta.

Arteta said he hopes the result, which follows last week’s 2-0 win against Tottenham in the north London derby, gives his team the belief that Arsenal can be crowned league champions for the first time since 2004.

But he wants to keep his team’s feet on the ground despite a remarkable season in which they have lost just once in the league.

“We know our reality, we know how much we still have to improve,” said the Spaniard, who was previously Pep Guardiola’s assistant at City.

Arsenal face the defending champions in the middle of next month but their upcoming fixtures all look winnable and it is getting increasingly difficult to see where they will slip up.

Leaving the match against City aside, Arsenal’s next opponents in the league are relegation-threatened Everton, Brentford, Aston Villa, Leicester, Bournemouth, Fulham, Crystal Palace and Leeds.

City, with title-winning pedigree, appear to have found their form again after a wobble and the sides at the bottom of the table will fight for their lives as the trap door looms.

But former Arsenal captain Arteta has transformed his side from also-rans last season into title favourites, through luck and judgement.

Saka has gone from strength to strength while Nketiah has stepped up in the absence of new signing Gabriel Jesus, injured while playing for Brazil at the World Cup.

The 23-year-old now has six goals in six games in all competitions since the tournament in Qatar.

When asked to sum up the first half of the season, Arteta said it was “extraordinary” but was again careful to avoid the impression that his team are the finished article.

“It doesn’t get much better than that, that’s the reality,” he said. “I think we deserve the points that we have.

“We have played well enough to win most of the matches but the reality as well is that we still have a lot of things that we can get much better at.”

So does he believe Arsenal are now favourites for the title, on course to win the Premier League for the first time since Arsene Wenger’s last triumph nearly two decades ago?

“And we are still far from that and I know the level of the other teams, especially one that has won everything in the last five or six years and we are not there yet.” – AFP