Thursday, February 2
You are at:Home»News»Sarawak»Celebratory mood, crowd back to welcome Year of the Water Rabbit
For the freshest news, join The Borneo Post's Telegram Channel and The Borneo Post on Newswav. 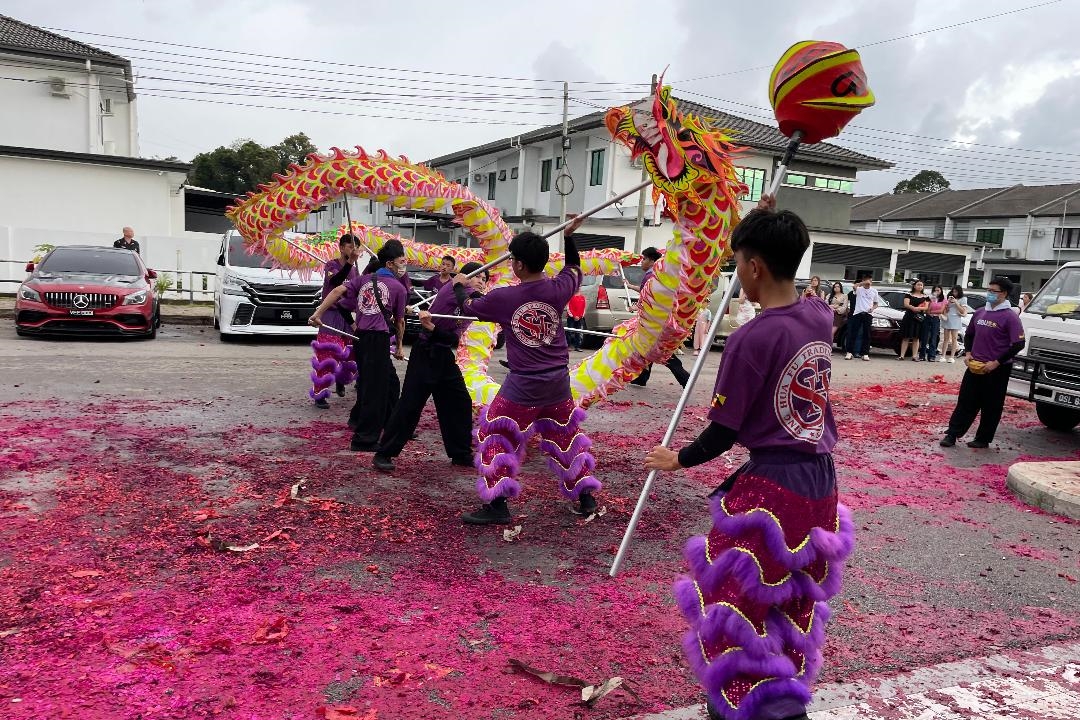 A dragon dance performance in front of a residence.

SIBU (Jan 25): The celebratory mood is back and so is the crowd as the Chinese community celebrates the beginning of the Chinese New Year (CNY) or with full force enlivened with lion and dragon dances.

Children jumped for joy as they watched the lion dancers showcasing their stunts and acrobatic skills to captivate the spectators in front of their homes during the first two days of the celebration.

“It’s nice seeing the crowd returning to watch the dancers and simply put, the celebratory mood was festive, joyful and awesome,” he added.

The lion dance is a traditional Chinese dance performance always associated with the celebration of the Chinese New Year.

It is one of the Chinese traditional cultures that symbolises power, wisdom and superiority and is performed to bring prosperity and good luck for the upcoming year.

Wong said a CNY celebration would be incomplete and lacking without the presence of the lion dance troupes.

“The sound of the cymbals, the gong and the firecrackers that go along with the movement of the lion dance brings forth good fortune and happiness to mark the occasion and it is something not to be missed during the CNY celebration,” he added.

After almost two years of not being able to perform, Wong said his troupe members were eager to return and showcase their skills.

However, he said booking for this year was not as encouraging compared to the pre-pandemic years.

“Still, the good feeling is in the air as we move from house to house to perform both the lion and dragon dances and it’s clear that the Chinese community usher in the Lunar New Year with open arms.”

Wong said his team had been training all year round at the main gym along Jalan Lanang here to improve their skills, rhythm, coordination and synchronicity as well as stamina and endurance.

“We want to be able to execute the dance steps when it matters most and we want to put our best foot forward so as to provide satisfaction to our clients who want quality performance.”

Apart from performing the lion dance during the festive season, Wong said the members also took part in wushu competition in both national and international competition during non-festive occasions.

The exponents had won countless awards in both local and international competitions, making it one of the most sought-after lion dance troupes here.

“Fly-by-night troupes also emerged during the past two days but generally, those who engage the services of these troupes do not see this as an issue – so long as the troupes can perform and they have no qualms about that,” he noted.

On the bookings, Wong said they would perform daily for the first four days of the CNY celebration with the 5th day reserved for the business sector when most of the shops reopen for business.

“The time varies, some prefer in the morning while others in the afternoon and we just cater to their needs.”

On dragon dance, Wong said it was also making a comeback after a two year absence following the lifting of all Covid-19 restrictions.

“The dragon dance was not allowed last year because the standard operating procedure (SOP) prohibited any group or gathering of 15 or more people at one time. A dragon dance performance would require at least 20 members.”

Previous ArticlePBDS: Anwar must have political will to weed out graft
Next Article Relationship of components under PH Sarawak ‘strong, united’, says secretary