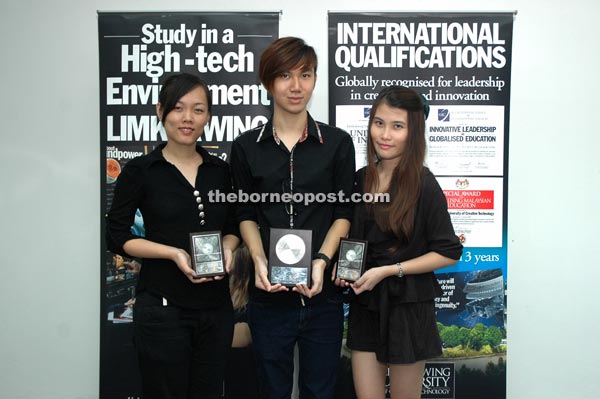 KUCHING: Four Limkokwing Borneo students emerged victors at a recent design competition organised by KTS in conjunction with their 50th anniversary for impressing the judges with their talents for the built environment.

The creative artworks displayed by the students impressed the judges as they awarded the top three prizes in the stage design category to Diploma in Interior Design students, Chin Siew Lun, Tang Chung Lee and Jenny Kong Ling Li.

Two of the main aspects that the students considered when designing the stage for the competition was its mobility and versatility as well as the aesthetic value that it had to maintain to complement the function hall in the KTS Anniversary Park.

Coming in first place was Chin Siew Lun, who had the strongest visual impact in his design, which was inspired by the concept of connections.

His focus was to create a connection between three groups, which were the users, the viewers and the surrounding nature.

Using these three points, he was inspired to create a stage using purely triangles as the base of his design.

“People tend to forget how a stage can affect the environment of an event. The main focus of my design was to create a stage that looks interesting and eye-catching but at the same time had the simplicity to be used for any sort of functions in the hall,” said Chin, who is currently in his second year of the Diploma in Interior Design programme at Limkokwing Borneo.

Limkokwing Borneo alumni, Liaw Kheng Boon, came in second place with his unique sculpture design, as he had created an artistic piece to mark the successful journey of KTS for almost 50 years.

“The sculpture is made out of four parts, which are Landscape, Tunnel, Individual Space and Group Space and the combination of these four parts tell the whole story of the formation of KTS Holdings from the moment each founder started working together,” explained Liaw.

Limkokwing Borneo has always believed in bringing the best to students, both academically and through extra curricular activities.

The institute’s industry-within-the-university (Indusity) programmes give students the extra edge by exposing them to the industry-orientated environment throughout the course of their studies, allowing them to become well-rounded graduates.

“As a creative institute, we have always encouraged our students to participate in various competitions that are relevant to their course of study as this will allow them to grow in terms of experience and skills,” said programme leader for the Faculty of Architecture and Built Environment Alan Goh.