Tuesday, November 29
You are at:Home»News»Nation»‘Blueprint to address flaws in education system’ 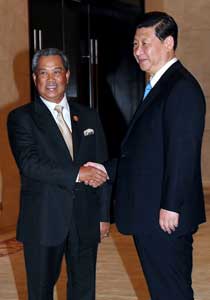 HOW DO YOU DO? : Muhyiddin greeting Chinese vice-president Xi Jinping before the bilateral meeting at Li Yuan Resort, Nanning, China yesterday. — Bernama photo

Muhyiddin, who is also the education minister, dismissed assumptions the blueprint revealed that Malaysia was grappling with a crisis in the education system, and said the weaknesses detected were in terms of quality and there was no crisis.

“There are weaknesses which we have identified and we will address them,” he told Malaysian journalists covering his working visit to China.

Muhyiddin said the national education system, which had undergone a process of more than 50 years, was successful in the sense that almost 93 per cent of Malaysians were able to attend school and most of them could read, write and count.

“That is a major achievement in five decades. We find that
our system has to match the growth in developed nations. It’s better for us to admit the weaknesses and address them,” he said.

Muhyiddin said the blueprint was important not only in terms of knowing ‘where we are now’ but also in terms of the initiatives taken to overcome problems so that over the next 13 years Malaysia could attain a major shift through the three-wave programme.

“The explanation is provided in detail in the blueprint, year by year, something not done up to now,” he said.

Muhyiddin invited political parties which assumed there were shortcomings in the national education system to help the government address the situation.

“If they are sincere and will not politicise the issue of education, let them submit proposals and identify the experts. They accuse us of politicising education, which is not the case.

“The decision to have the blueprint was made by the prime minister and myself. However, only the experts are addressing the weaknesses. I am not even on the panel. That role is theirs. We only want to do the best for the future of our children,” he said.

Dr Lim Teck Ghee, director of the Centre for Policy Initiatives (CPI), had reported in a news portal that the preliminary report on the blueprint had admitted that Malaysia was facing a crisis in its education system.

He had pointed out that the report cited an international trend in education of science and mathematics that showed the quality of education in Malaysia had declined from 1999 to 2007. — Bernama