Tuesday, February 7
You are at:Home»News»Sarawak»STB to incorporate tree planting in all events
For the freshest news, join The Borneo Post's Telegram Channel and The Borneo Post on Newswav. 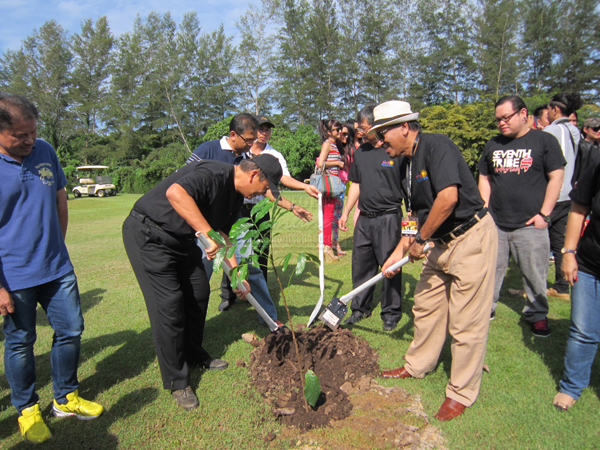 MIRI: Sarawak Tourism Board (STB) will incorporate tree planting in all of its events as part of the board’s philosophy and environment conservation efforts.

Rashid believed that every human activity including the festival has some impact on Mother Earth directly or indirectly.

“Environment particularly global warming is now becoming a major concern and issue around the world including we here in Malaysia.

“We as part of global citizens, we must do our part to minimise impact to environment contributed by human activities,” said Rashid.

Saying that tree planting is just a small part of the board’s contribution and to create awareness of the importance to conserve Mother Nature, Rashid said: “The greening project we are undertaking with Eastwood Valley Golf & Country Club represents the opportunity for all of us to come together as one and to cultivate especially among younger generation that Borneo’s greenery is one of precious national treasures and the tree-planting we are carrying out goes some way to balancing carbon footprint.”

Rashid hoped that the programme will help develop a group of young people with ambition, passion and compassion for the environment that will define future Malaysia.

“Sarawak and its people are proud to have the world’s oldest tropical rainforests and they along with our sustainable forest management are valuable tourism assets and a legacy which we are custodians of,” he added.

The inaugural Asia Music Festival kicked off yesterday in a wonderful setting at Eastwood Valley Golf & Country Club, which is among the top ten golf courses in the country.

“The venue no doubt is befitting, with its splash of greenery and the forest looming on the horizon. This is really the place where the stress of life will be overtaken by the sound of nature and the smell of fresh air from the countryside,” he added.

The festival brought in electrifying eclectic mix of live music on stage comprising bands from the Asian region.

“With its objective of attracting Asian expatriate community living in Brunei, Bruneian themselves, Sabah and peninsular as well as those in Indonesia, Singapore and the region, the atmosphere is that of a carnival as apart from the night shows, there will also be fringe events starting in the afternoon,” he added.

Although the performance commenced at 4pm, live music and singing fans and enthusiasts were seen at the venue at 2pm for the big bikers, tattoo and handicraft exhibition.