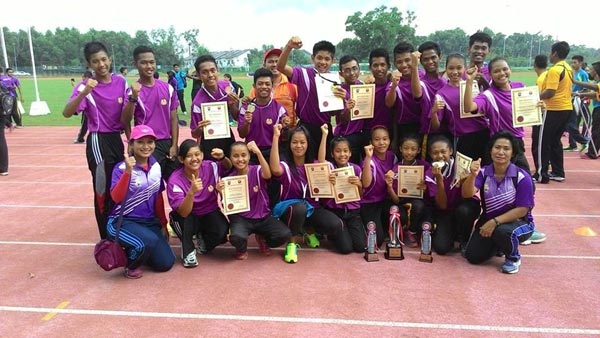 Norris Foo and Quek Lee Yong were the best performers as they bagged two gold medals each in the one-day championship, with Norris winning the Girls 100m hurdles in 14.7s and the 200m in 25.1s while Quek won the 110m hurdles and 200m events with times of 14.6s and 22.1s respectively.

She was assisted by Sharon Kezia Leela Sundararaj and Belun Saran.

SMK Tabuan Jaya principal Hassan Wa’Gani was delighted with the splendid performance of the athletes, saying that they had proven themselves to be the best in the country, beating even the Bukit Jalil National Sports School team. “This is the third circuit of the championship and we have won all three circuits, the earlier two were held in Perlis in May and in Selangor in June,” he said yesterday.

Hassan attributed the athletes’ success due to the hard work, commitment and good teamwork among the athletes and coaches.

“Rasia is a very committed coach and I have faith in her to lead our athletes to glory. We are very proud of the athletes’ achievement and they are even better than their counterparts from national sports schools,” he added.

In term of athletics, Hassan is quite confident that Sarawak can do very well in the national athletics meet next year.

“Our athletes can contribute at least five golds and we shall give the other teams a strong challenge,” he assured.

Hassan hoped that the federal government would allocate higher food allowance to students in the state sports school especially to those who are involved in athletics.

“I do feel sad that after the establishment of state sports school for eight years, our students still receive lower food allowance of RM13 per day when compared to RM40 per day for Sabah State Sports School, RM30 for Bukit Jalil Sports School and RM34 for Bandar Penawar Sports School,” said Hassan.

He also hoped that the Sarawak State Sports Council and the state government would render assistance to the athletes of SMK Tabuan Jaya.

“We helped to develop and groom the athletes who will represent Sarawak in national competitions and we do appreciate some form of assistance from both parties,” he said.

The national championship initiated by the Sports Unit of the Ministry of Education and organised by the Terengganu Education Department saw a total of 18 events for boys and girls being competed.

Coming in second and third in the meet were Kuala Lumpur (2 gold, 3 silver, 1 bronze) and Kedah (2 gold, 1 silver, 2 bronze) respectively.