Monday, February 6
You are at:Home»News»Sarawak»‘Water theme park project progressing as scheduled’
For the freshest news, join The Borneo Post's Telegram Channel and The Borneo Post on Newswav. 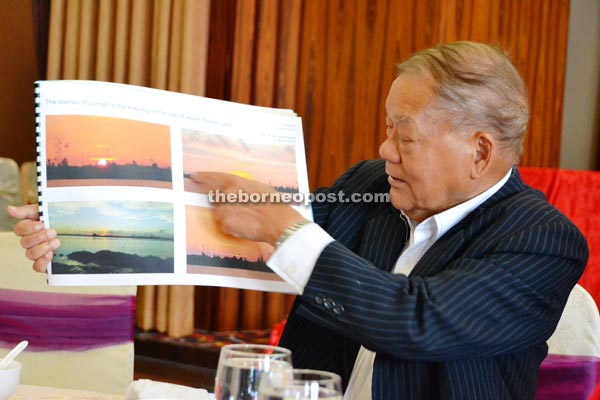 Lau showing reporters on what to expect of the water theme park once it is completed.

MIRI: The much anticipated Senadin Water Theme Park project has completed 80 per cent of its earth filling, and is ready to move to the next level.

This was disclosed by Miri Housing Group of Companies executive chairman Dato Lau Siu Wai at a press conference yesterday, who also said the earth filling took them a much longer time than usual due to the soil.

“The deep and soft earth took us longer time and more soil. Instead of filling it at one go, I wanted to perfect the foundation, hence layering it inch by inch,” he said.

To ensure that the project went according to plan, Lau revealed that more workers were employed and they had to work overtime.

“With the speed, we hope that Phase One can be completed by the end of this year,” he said.

Voicing his disappointment over the false rumours virally spread around, Lau said he wanted to update the public through the news media, hoping to stop the rumours.

“Some said the project has been abandoned and many other nasty things. This is unforgivable, since our side has done many preparations ahead of the commencement of the mega project,” he said.

Lau feared that the rumours could eventually affect the company’s image and shaken stakeholders’ confidence.

When asked on the rising cost due to the Goods and Services Tax (GST), Lau uttered ‘Apa boleh buat?’ (What to do).

“Of course we will be affected in many ways, but we will make do as time goes. As far as business investment is concerned, the project is a poor investment. But it will definitely benefit the local people and economy as it attracts tourists and creates more employment opportunities. Perhaps, the government could be more considerate,” he said before concluding the press conference.

The RM125-million project is expected to be completed by the first quarter of next year.