Sunday, September 26
You are at:Home»News»Sarawak»Putting Kuching at the forefront

Festival aims to showcase arts, culture and lifestyles of the city and Sarawak to a wider audience 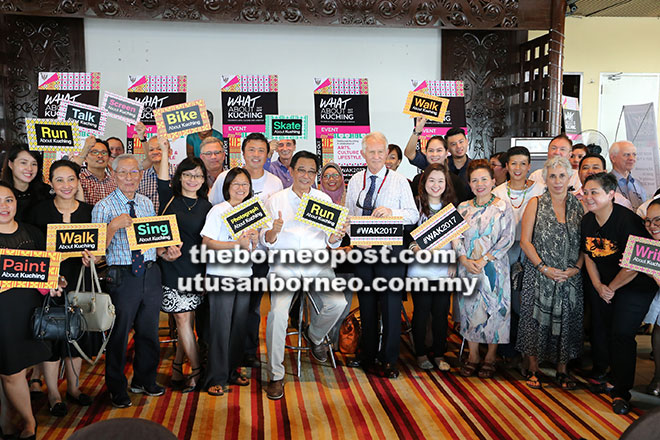 Abdul Karim (centre) together with WAK 2017 sponsors and content drivers at the launch of ‘JOY – Photographs & Haiku’ exhibition.

“We have a lot of things to show,” he said of the month-long celebration of arts, culture and lifestyles which will be officially launched by the chief minister on Sept 30.

Speaking at the launch of ‘JOY – Photographs & Haiku’ yesterday, Abdul Karim recalled that 20 components had confirmed participation in the festival during its first media launch in July.

“Today, there are 74 components. The ministry is very happy because this is something that came from the community. As a Kuchingite myself, I am very proud.”

He added that he was astounded by the volume and range of exciting pursuits and passion here in Kuching.

“I urge those wonderful talents, including those who are living abroad, who are still not a part of this year’s WAK, to put in their proposals for next year.”

JOY features travel photographs from Donald and Marina, collectively known as maridontreks. The 30 images can be viewed at the Kuching Waterfront, and each image is paired with a haiku written specially for the exhibition by Wordsmiths of Kuching, a group of spoken word poets and storytellers.

“I urge everyone to visit this public exhibition at our beautiful Kuching Waterfront and perhaps derive some degree of JOY themselves through the wonderfully captured images and lovingly composed haiku. If this exhibition brings a smile to your face, the organisers would have achieved their goal in putting up this joyful event,” said Abdul Karim.

According to Donald, the exhibition does not exclusively showcase Sarawak images.

“But it highlights a feature that is very commonplace here in Kuching and Sarawak, our overwhelming pleasure of being able to call this land our home, our real JOY.”

In the coming month-long celebration, Kuchingites will get to see mural artist Leonard Siaw creating a gigantic mural on the side of an entire building, forest sculptor Spencer Byles bringing some of his Wild Forest Sculptures to the Kuching Waterfront, Sarawakian artist Ramsay Ong exhibiting his latest creative masterpieces and numerous other artists and performers showcasing their talents to the wider audience in Kuching. 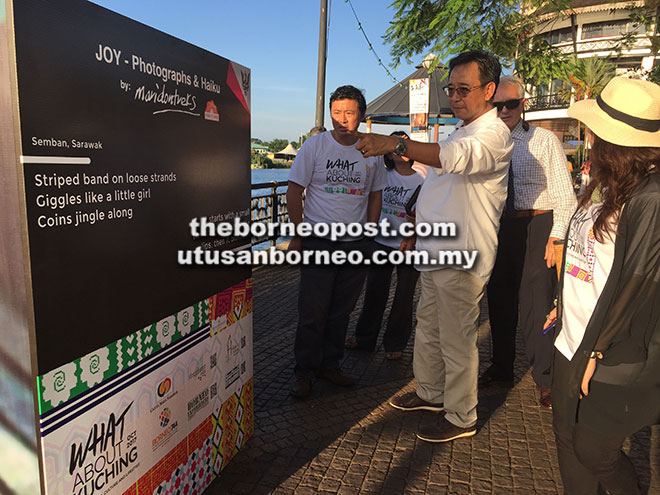 Abdul Karim (right) makes a stop at one of the photo displays at Kuching Waterfront.

“All of us hope that our government and private sector will set aside funds to allow the many talented artists, photographers and creatives to showcase their works to the people in the future. Such Public Art is a positive step towards instilling greater appreciation within our community and from here we can all aspire to be a world-class platform for the arts and creatives.”

WAK 2017 celebrates the arts, culture and lifestyles of the people of Kuching by creating a platform to share the abundant talent here and throughout Sarawak.

The month-long event, beginning Sept 30 to Oct 29, will encompass every genre from visual to performing arts, traditional to contemporary arts, and from static exhibitions to active outdoor pursuits.