Saturday, August 20
You are at:Home»News»Sarawak»New passport ready in one hour at Sri Aman Immigration Dept office 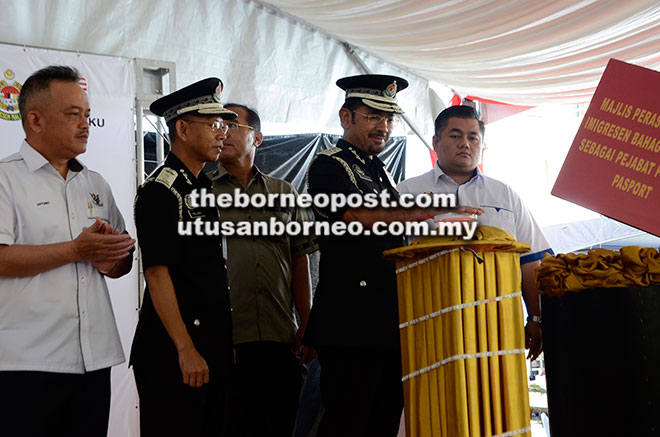 Mustafar cuts the ribbon to officially declare open the Immigration Department office at the Federal Complex in Sri Aman as Ken (second left) and others look on.

SRI AMAN: The Immigration Department office at the Federal Complex here can now issue a new international passport and other travel documents within an hour after payment is made.

This was revealed by Immigration Department director-general Datuk Seri Mustafar Ali, who said residents of Sri Aman now do not have to go to Kuching or Sibu to apply for the documents.

“It takes a day’s journey to get the new passport at these towns and it is very time consuming. Now it can be done in an hour at our office in Sri Aman,” he said before declaring open the department’s new office here yesterday.

He revealed that since it was operational on July 22, the office had issued 299 international passports till the 12th of this month.

Mustafar assured that the Immigration Department would always strive to give the best services and would not compromise on the sovereignty and security of the country.

He warned those harbouring foreigners and those who entered the country illegally that the department would deal with them according to the law of the country.

Thus, he urged them to come forward to the Immigration Department and work together with them instead of breaking the law.

“It is better to pay a compound rather going to the court and get heavier penalty,” he said.

He called on the people in Sri Aman and their community leaders to be the ‘eyes and ears’ of the department and report any activities that flout the Immigration law.