Thursday, April 9
You are at:Home»News»Sabah»Young Hornbills missing from Lower Kinabatangan? 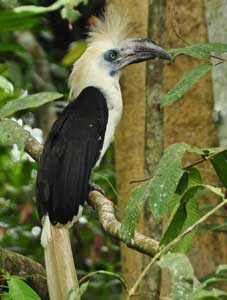 WHITE-CROWNED HORNBILL: Information on hornbill breeding cycles is crucially needed to evaluate the status of hornbills in Sabah. Seen here is the White-Crowned Hornbill (Berenicornus comatus), one of the eight species of hornbills found in Sabah. — Photo credit: HUTAN/Eddie Ahmad.

KINABATANGAN: World renowned hornbill expert from Thailand, Professor Dr Pilai Poonswad of Mahidol University and the Hornbill Research Foundation (HRF), has expressed her concern for the lack of information on the breeding cycles of hornbills in Sabah.

“I have visited Sabah before briefly for the Borneo Bird Festival last year but after visiting the Lower Kinabatangan to do a rapid assessment of hornbills, I am now concerned in particular with the lack of information on breeding cycles for the whole state and the lack of suitable nesting trees in this area in particular,” shared Poonswad.

Poonswad and her team of three researchers spent a week with local counterparts at field sites of the Lower Kinabatangan with the Sabah Wildlife Department (SWD), HUTAN — Kinabatangan Orang-utan Conservation Programme (HUTAN-KOCP) and the Danau Girang Field Centre (DGFC).

“The first thing that needs to be done is to establish when are the different species of hornbills breeding,” stated Poonswad who has spent the past 33 years studying and carrying out community based conservation of hornbills in Thailand.

During the teams’ rapid assessment in the Lower Kinabatangan, another issue that has caused concern for Poonswad and her researchers is the lack of suitable nesting trees.

“I understand that the Lower Kinabatangan is a forest that has previously been extensively logged and I can clearly see it is also now part of the oil palm landscape.  This means that big trees which are usually preferred by hornbills are missing from this area,” explained Poonswad.

For example, in a similar site in Southern Thailand, Rhinoceros Hornbills (Buceros rhinoceros) on average makes its nest in trees that have a diameter of about 148 centimetres but in the Lower Kinabatangan, Poonswad estimated that trees that might be suitable were mostly between 40 to 60 centimetres in diameter.

“Talking to our counterparts, we know that the Rhinoceros Hornbills are seen along the Lower Kinabatangan, even in flocks but this doesn’t mean they are nesting here. They could be seen during non-breeding cycles, which is why it is important to establish the basic information of breeding cycles,” said Poonswad.

As part of their work, HRF also ensures that there are adequate nesting sites before the breeding cycle that varies between the different species of hornbills.

“We will repair natural nesting sites when needed and put up artificial sites where they are no natural options to nest,” said Poonswad.

While her team had not planned to do either during their rapid assessment, they scrambled materials to repair one nesting site in DGFC and to build another outside their homestay in Sukau because of their concern for a pair of Oriental Pied Hornbill (Anthracoceros albirostris) they saw daily.

“The dedication and passion of the HRF is extraordinary and I am grateful that they made the time to come down to the Lower Kinabatangan to do this much needed rapid assessment even though it clashed with the beginning of the hornbill season in Thailand,” said Dr Marc Ancrenaz, scientific director of HUTAN-KOCP.

HUTAN — KOCP has been investigating the hornbill situation in the Lower Kinabatangan with survey interviews of local communities from 2009 to 2010 before presenting their findings last year.

“Through interview surveys, the local community also specified that the loss of big trees over the past generation as the cause of decline of hornbill nesting sites and this is an issue we have to address if we want to see all eight species in the Lower Kinabatangan in the long term,” said Ancrenaz.

Previous ArticleAnwar fears Raja Petra will reveal all his secrets — DPM
Next Article MPP chief: Time to have a wholesale market in Padawan