Monday, January 24
You are at:Home»Sports»Football»Stalemate in Melaka 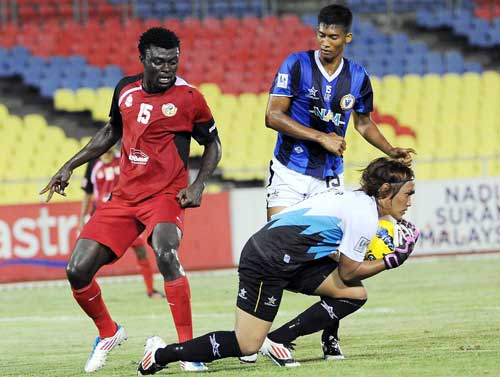 The match was played at Hang Jebat Stadium in Melaka instead of Stadium Negeri as earlier reported.

Sarawak head coach Robert Alberts told The Borneo Post that the Croc’s poor performance in the first half cost them dearly.

“They (Sarawak players) were again not playing up to my expectations in the first half. We had a lot of chances but then again sloppy defending and poor finishing led to the team trailing to KL 1-0 before half-time,” added Alberts who was clearly disappointed at the performance of his players.

Kuala Lumpur got their goal when they won a penalty. Zakaria Charara coolly converted the spot kick as he fired the ball past Saiful Amar Sudar to give the City Boys the lead in the 39th minute.

After the breather, Sarawak looks the more dangerous side launching numerous attacks.

Things went the Crocs’ way in the 50th minute when Joel Epalle found the net off a cross from Ashri Chuchu to restore parity.

There was an appeal for a penalty by the Crocs late in the second half when they claimed one of the opposition players had touched the ball in their own six-yard box. The referee did not accede to the appeal.

Despite the Crocs’ attacking style of play and the introduction of playmaker Azizan Baba in the second half, the game ended 1-1.

“I see the 1-1 draw as two league point’s loss rather than a one point gained. I am disappointed that we lost to Kuala Lumpur as we could have won it,” commented Alberts.

Sarawak might miss the services of K. Rajan in the next match as he was reported to have sustained a shin injury due to a knock against the Kuala Lumpur custodian. He was substituted during the match last Saturday.

Sarawak will face Sabah next  at Stadium Negeri.