Saturday, October 24
You are at:Home»World»Syrian forces ‘cleans up’ Damascus 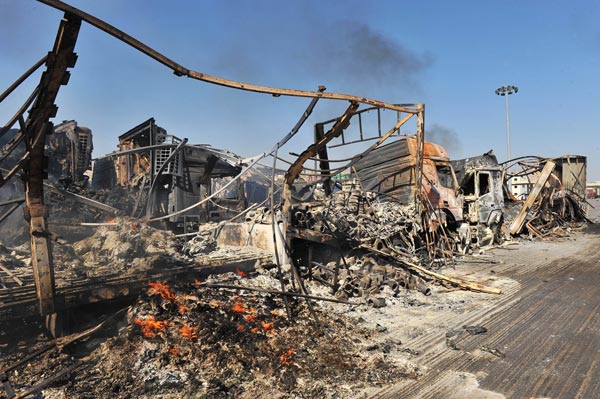 BURNT: Burnt-out lorries at the Bab al-Hawa border post with Turkey after it was seized by Syrian rebels. — AFP photo

DAMASCUS: Syria forces recaptured a Damascus district in a fierce fight Friday with rebels, who scored their own battlefield successes by seizing border posts as they sought to isolate Bashar al-Assad’s regime.

“Our brave army forces have completely cleaned the area of Midan in Damascus of the remaining mercenary terrorists and have reestablished security,” state television said, using the regime term for rebels.

The Syrian Observatory for Human Rights said regime forces had also attacked the eastern Damascus neighbourhood of Jubar as they pressed a counter-offensive against the rebel “Operation Damascus Volcano” campaign.

In an earlier statement, the Observatory said “seven tanks and two armed personnel carriers stormed the district” of Midan in southern Damascus.

Yesterday’s clashes followed a deadly day of fighting across Syria, which the Observatory said killed 302 people, the highest daily toll since the uprising against President Bashar al-Assad’s regime began more than 16 months ago.

Clashes occurred throughout the country and even on its frontiers, activists and witnesses said.

An AFP photographer reported that fighters of the rebel Free Syrian Army (FSA) fought a raging battle with Syrian troops at the Bab al-Hawa border post with Turkey and that some 150 rebel fighters were yesterday in control of the crossing.

Rebels sacked the Syrian border post, which was bloodstained and riddled with bullets. They also looted Turkish lorries caught up in the battle.

On Thursday, Iraq’s deputy interior minister Adnan al-Assadi told AFP that the FSA had seized control of all crossings along their common border.

He said Iraqi border guards had seen FSA fighters detain a Syrian lieutenant colonel and cut off his arms and legs.

“Then they executed 22 Syrian soldiers in front of the eyes of Iraqi soldiers.”

The account of the killings could not be independently verified.

At the United Nations, Russia and China used their powers on Thursday as permanent Security Council members to block resolutions on Syria for the third time in nine months.

UN-Arab League envoy Kofi Annan, who had called on the council to impose “consequences” for the failure to carry out his peace plan for Syria, expressed disappointment that it had failed to reach agreement.

Washington condemned the “highly regrettable decision” of China and Russia to veto the UN resolution, with President Barack Obama’s spokesman Jay Carney warning of “repercussions… in terms of how they’re viewed by the Syrian people.”

The United States said the Security Council had “utterly failed” on Syria and that it would now work outside the council to confront Assad’s regime.

The White House also said without the tougher mandate the vetoed text would have implied, there was no point in retaining UN military observers in Syria to monitor the non-implementation of Annan’s plan by Assad’s government.

Britain and Pakistan proposed rival resolutions extending the UN Supervision Mission in Syria (UNSMIS) and, amid Council deadlock, a vote on both could be held on Friday, just hours before the end of the mission’s 90-day mandate. — AFP