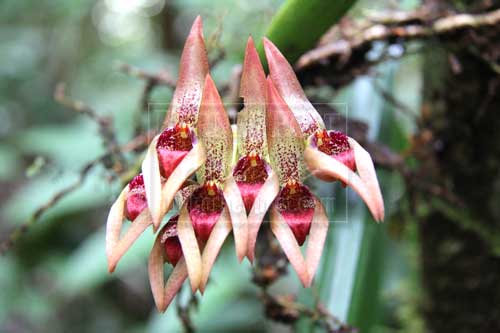 DEADLY BEAUTY: Despite its attractive appearance, this species of bulbophyllum packs an olfactory wallop with its pungent aroma which in thesundaypost’s opinion, is not unlike an open sewer, rotting eggs, and decomposing bodies all rolled into a single entity.

“From the presence or absence of certain species, it’s possible to roughly piece together what disturbances may have happened in specific localities in the past, even if it took place decades before,” he explained.

Nature can be likened to a history book in that past events have the potential to be indelibly etched into its landscape. The caves of Bukit Agung, about 1.5 hours by boat and on foot from the Mentawai ranger station, are good examples of where millions of years of history of that particular area is literally carved into its walls by ancient underwater streams and even now, is still being written and preserved.

If a large-scale natural disaster such as a landslide occurs, its effects may still be reflected in the surrounding environment many decades later, such as the type of plants and trees which currently thrive there and the quality of water in its rivers. The same can be said about the long-term effects of man’s activities.

Forests which have been selectively logged may take up to 30 years to recover, said tree researcher Mohd Nasir Mohamad from Jabatan Perhutanan Semenanjung Malaysia, who has extensive experience studying various forested areas around Malaysia under his belt.

“If the area has been totally logged, it will take at least 70 years to recover. But if we are talking about full recovery, it could take hundreds of years, or the area may never fully recover at all,” he observed. 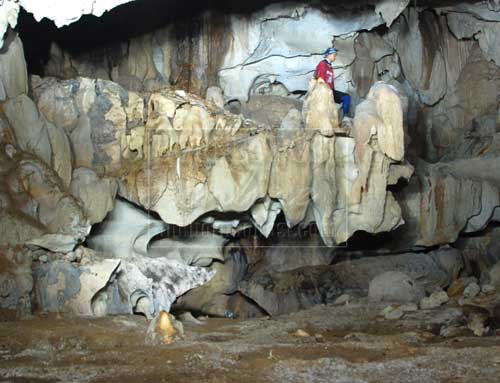 NATURAL WONDER: A MSE participant surveys a large cave chamber from atop a natural balcony, both formed millions of years ago when Bukit Agung was submerged under water, leaving behind a surreal subterranean landscape which is still undergoing formation today – thanks to water seeping through cracks in the surrounding bedrock. — Photo courtesy of Rambli Ahmad

It is not just biodiversity which stands to lose out from environmental changes. Repositories of knowledge in local communities, including medicinal and nutritional properties of plants found locally, are equally vulnerable.

During the MSE, Sarawak Biodiversity Centre (SBC) research officer Jovita Elderson and her team worked together with two elders from Kg Melaban to identify local plants with medicinal and other beneficial properties as used by local communities.

The team managed to collect some 52 samples to bring back to Kuching to be archieved in SBC’s herbarium, analysed for active compounds which medicate described ailments, and also propagated in nurseries for further research and development.

However, Jovita acknowledged there remained much potential to be uncovered.

“We have probably only uncovered about 10 per cent of what is out there,” she said, adding that mapping and documenting local knowledge comprehensively is not easy, requiring intensive, long-term effort.

Sadly, this may be time and resources which the researchers don’t have. In West Malaysia, loss of natural forests due to extensive land clearing has led to significant decreases in shared communal knowledge as certain plant species become extinct in certain areas. NGOs have also noted that certain traditional handcrafts have ceased to be produced due to the inability of indigenous craftsmen to source the materials from forests which are no longer there.

It is not far-fetched to say Sarawak may be facing a similar fate.

The urgency to document and protect vulnerable areas is underlined by what’s happening just outside the park’s borders. Signs of land clearing for subsistence farming and from logging activities with the impending approach of oil palm plantations are evident.

Increasingly, some activities have breached park boundaries. The protected status of the MNP has made it a lucrative target for poachers and illegal loggers as resources outside the park’s limits become more scarce.

Less than 200 metres from Mentawai Ranger station, just across a kerangas river, is a solemn reminder of the immense challenges state conservation agencies face in enforcing and protecting vulnerable forest areas.

An unknown person or persons had hacked large, unsightly gashes into the trunk of a magnificent gaharu tree, deep enough to reach the tree’s centre but not kill it.

The holes were to encourage a certain type of mold infection which would lead to the formation of agarwood – an aromatic resin which can fetch anywhere between hundreds to several thousand ringgit on the international market – within the tree.

The poachers would return once in a while to check on the tree, and eventually after a few years, the tree would be felled, its trunk and branches split open to harvest the valuable resin, if any.

There’s no question Sarawak’s natural forests are a bounty unto themselves. Due attention and resources must be invested into its responsible and sustainable preservation and management – not just for socio-economic benefits but also scientific value and potential.

Swinburne University of Technology Sarawak student Wong Changi, the expedition’s youngest research participant, highlighted that modern scientific research has opened up many promising opportunities that may yield solutions to some of the biggest challenges that the world faces today.

For his academic research project, among others, he was exploring the biodiversity of endophytic fungi in pitcher plants to determine whether these fungi could be used to break down electronic waste which is increasingly ending up in landfills and contaminating land and water resources.

Changi’s supervisor and Swinburne senior biotechnology lecturer Dr Moritz Müller noted sustainable stewardship of the natural environment was not a responsibility to be taken lightly.

“Nature is very strong, and normally it can recover if left alone unless the damage is really great. It’s not something we should take for granted, not just for our own sakes, but also everyone else’s,” he noted.

Like any good fortune teller, Nature tells one what has happened in the past, what is taking place in the present and what will likely happen in the future.

The only catch is we have to be willing to listen to what She has to say and to see what She has to show. The decision whether to do anything about it or not is entirely in our hands.
One thing is certain: we take Nature for granted at our own peril.