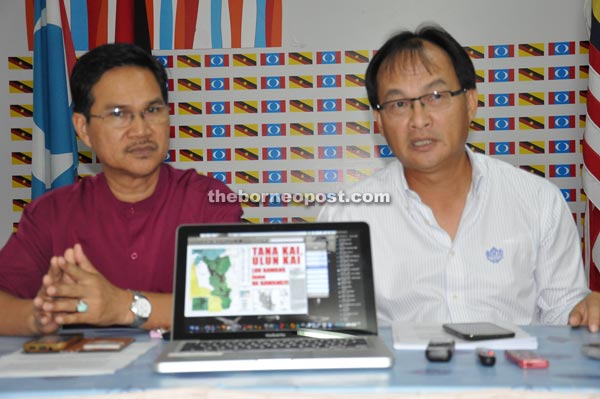 Baru (right) showing the map of the affected areas and their rallying cry in defending their lands during the press conference. On the left is state PKR deputy chairman Abang Zulkifli Abang Engkeh.

KUCHING: The Lun Bawangs in Ba Kelalan are against the state government’s plan to declare an area of approximately 120,855 hectares (ha) in the constituency as protected forest.

Ba Kelalan assemblyman Baru Bian said his constituents were totally against the proposed Ulu Trusan protected forest plan as they believed it would extinguish their native customary rights (NCR).

“The proposal would cover a huge area of Lun Bawang NCR lands that are owned by thousands of people in Ba Kelalan constituency, leaving small portions of cleared areas around the villages.

“This will deprive the people of their hunting, foraging, and fishing lands and leave them with nothing to live off,” Baru told a press conference here yesterday.

Baru, who is also state PKR chief, said he was leading an all-out offensive against the proposal because he is the elected representative there, is one of the affected landowners, and it is his responsibility as a lawyer.

A notice of the government’s intention to declare the area as a protected forest was published in The Borneo Post last May 26.

Following the notice, Baru held a briefing in Lawas on June 11 for those affected in order to explain to them the mechanism of the law on the creation of protected forest, the effect this extinguishment would have on their rights, and the actions that should be taken to protect their NCR.

“After the meeting, it was unanimously agreed that all those affected will complete the forms to claim their NCR, whether as individuals or families, in accordance with the ‘pemakai menoa’ or ‘tana bawang’ or ‘tana kenen’ (equivalent to ‘pemakai menoa’).

“These forms will be submitted together with evidence of NCR to the Regional Forest office in Miri.”

All those present at the meeting also wanted a letter to be drawn up, have it signed by all those affected, and send it to Chief Minister Datuk Patinggi Tan Sri Adenan Satem to get the proposal scrapped.

“They also agreed that a suit be filed by my law firm (Baru Bian Advocates and Solicitors) on behalf of the affected parties for an injunction and to nullify the whole process,” said Baru.

In the meantime, he said letters would be sent to all villages to get the signatures of those who are affected by the proposal but were not present at the briefing.

“Many questions were asked at the meeting. They are utterly outraged and shocked that the government would extinguish their NCR land, thereby threatening their very existence.”

Baru said he was extremely disappointed that the Adenan administration was perpetuating the policies of the previous state government to extinguish the rights of indigenous Sarawakians.

“Our rallying cry in defending our lands ‘Tana Kai, Ulun Kai’ (‘Our Land, Our Life’) will be heard all over Sarawak.

The Lun Bawangs will not become ‘Lun Bawang, Iamo Na Bawang’ (‘People of the Land, With No Land’).