Thursday, August 6
You are at:Home»News»Court»Alleged S4S promoter charged in court 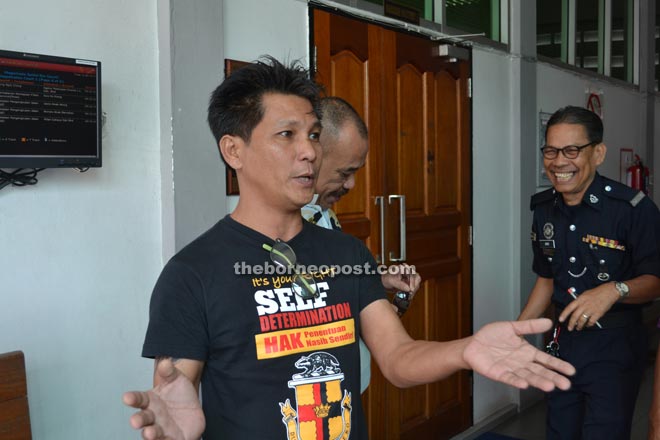 Yeu talks to pressmen outside the court.

SIBU: A 47-year-old purported promoter of Sarawak for Sarawakians (S4S) was yesterday produced in a Magistrate’s Court here to face a charge under Communication and Multi-media Act 1998.

When the nature of charge was read and explained to Yeu Bang Keng, 47, from Tiong Hua Road, through an interpreter in Mandarin, he said he understood the charge but denied it.

The offence framed under Section 249 of the Communication and Multi-media Act 1998, and punishable under Section 242 of the same Act carries a maximum penalty of RM100,000-fine or two years’ jail or both on conviction.

Yeu is charged for refusal to provide his Facebook username and password to the police in their investigation into a commentary in his FB posting at Sibu Central Police Station at 4.30pm on May 15.

Clad in a black S4S T-shirt when he appeared in court yesterday afternoon, Yeu was granted bail of RM15,000 with two sureties.

As bail condition, magistrate Saiful Sayoti ordered that he deposit RM10,000 in the form of fixed deposit certificate with the court.

State Deputy Public Prosecutor Mohd Azrul Faidz preferred the charge against the accused who was not represented.

The case comes up for further mention on Sept 2 and for trial on Oct 8.