Friday, June 25
You are at:Home»News»Sarawak»Cops to come down hard on stubborn road users 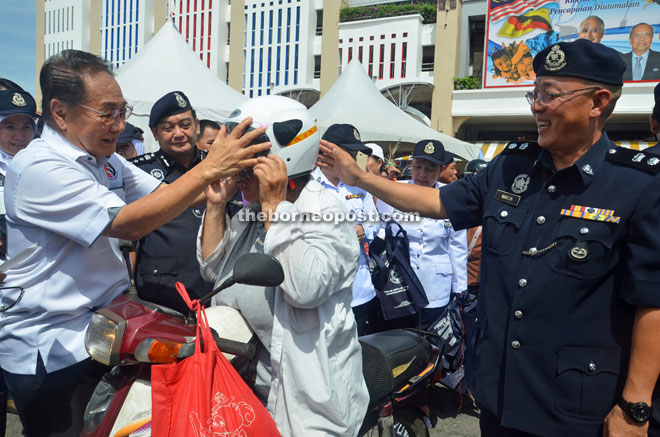 Wong (left) helps a motorcyclist to put on the safety helmet as Mazlan (second left) and Koo (right) look on. 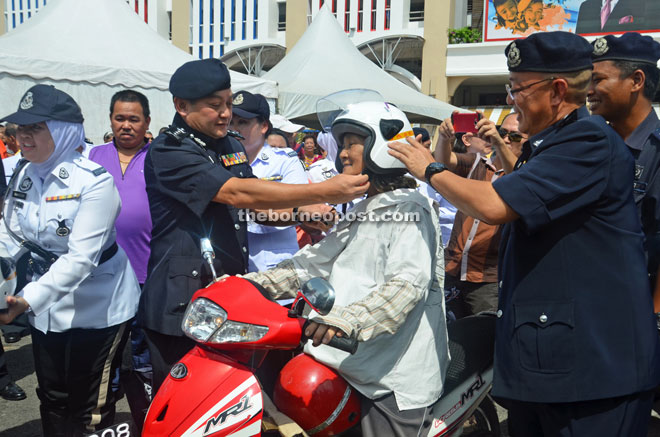 Mazlan (third left) helps a motorcyclist to buckle up her helmet as Koo (right) looks on. 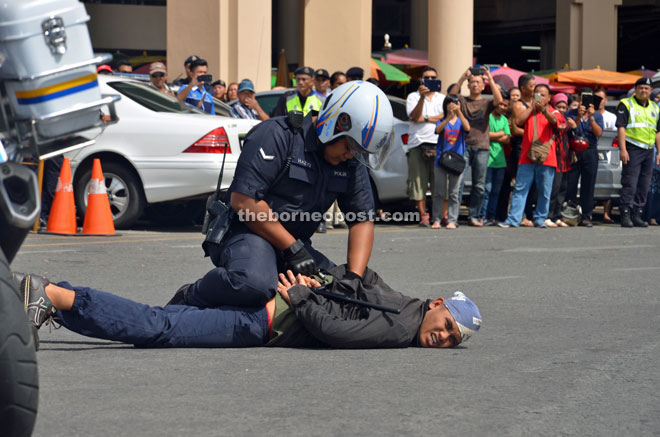 A policeman pinning down an ‘armed robbery suspect’ during the launch of ‘Ops Selamat’.

He wants strict enforcement and prompt legal action against stubborn road users as the number of road accidents rose 7.95 per cent from 5,977 cases in the first four months of 2015 to 6,452 cases in the corresponding period this year.

For a start, he has stationed 750 policemen in 60 hotspots—39 on federal roads and 21 on state roads—for the ‘Ops Selamat’ campaign in conjunction with the coming Gawai Dayak.

The campaign, which started yesterday and ends June 8, is themed ‘Home Safely, Reach Destination Safely’. It was launched at Sibu Central Market yesterday.

“We will use the Motorcycle Patrol Unit to monitor residential areas, use air surveillance and set up canopies at 60 strategic locations state-wide.”

Mazlan, the former Bukit Aman Crime Investigation Department deputy director who replaced Datuk Seri Muhammad Sabtu Osman on May 16, said loss of lives due to road accidents was distressing to the affected families and posed a significant economic loss to the country.

Despite many awareness campaigns and reminders, the attitude of motorists in general remained unchanged, he noted.

“Most drivers tend to disobey traffic rules by taking unnecessary risks like exceeding speed limit, overtaking dangerously, failing to stop at red light, and stopping their vehicles in prohibited areas.

“They forgot that such attitude is not only harmful to themselves but others.”

Apart from informing the neighbourhood watch, those returning to their hometowns could also inform police by downloading the ‘balik kampung’ form at the PDRM portal http://www.rmp.gov.my/ so that police patrols could be carried out in their neighbourhood, he said.