Saturday, July 11
You are at:Home»News»Sarawak»Biggest cash seizure made following arrest of Sabah officials in MACC probe 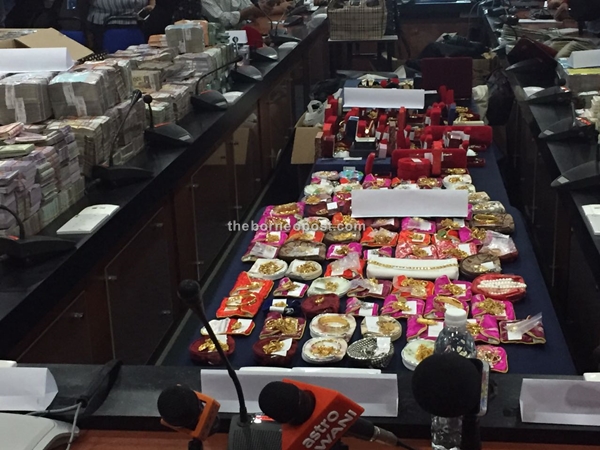 Gold jewellery were among items seized by MACC.

MACC deputy chief commissioner of operations Datuk Azam Baki said about RM52mil cash were seized from various places, including from the officials’ office and house in a 15-hours raid beginning on Tuesday.

He said the bank accounts of the officers, amounting to RM60mil, have also been frozen pending investigation.

The two officers, a 54-year-old director and his 51-year-old deputy, were detained at their offices on October 4 while two others, the deputy director’s 55-year-old businessman brother, with a Datuk title, and his accountant, 50, were arrested on October 5.

The seizure of cash, from the four suspects including from their local respective bank accounts, has amounted to RM112 million, said Azam.

Azam said it is also believed that more money were kept in several banks in a neighboring country.

Azam however refused to provide details of the neighboring bank accounts.

Earlier Wednesday, the four people were remanded for a week to facilitate investigations into corruption involving RM3.3bil worth of federal projects.

The arrests were made following a one year surveillance of the suspects activities following public complaints claiming corruption practice.