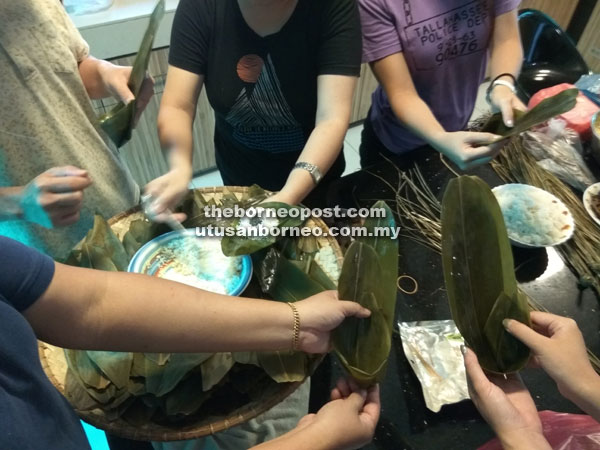 As the Dumpling Festival approaches, a ‘Kaki Masak’ group comprising a group of seven friends gather to learn how to make bak chang. 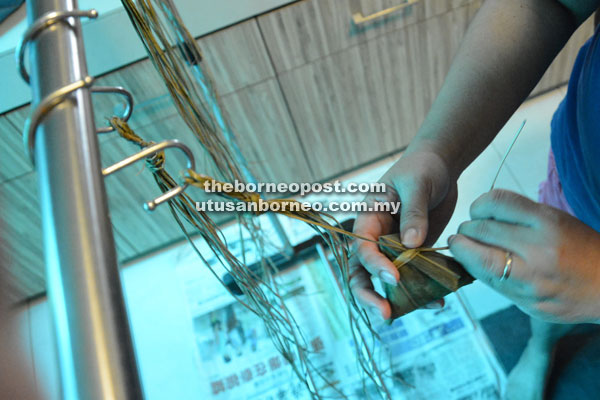 Once wrapped, the bak chang is secured with natural cords. 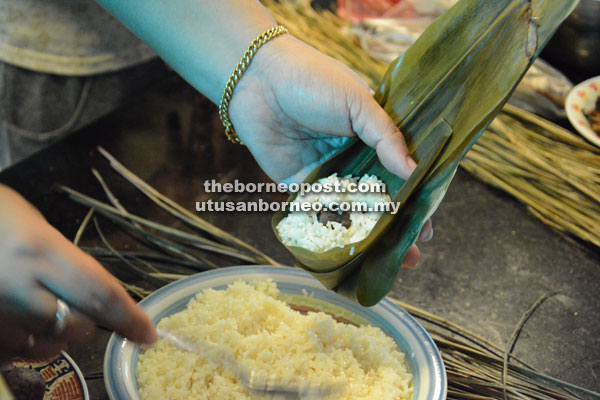 Rice is scooped into the bamboo-leaf pockets with other ingredients to make bak chang.

MIRI: Tasty ‘bak chang’ or rice dumpling is one of the reasons I look forward to the Dumpling Festival every year.

Just thinking about meat rice dumpling that comprises pork, mung beans and mushrooms, or rice dumpling with groundnuts and pork belly has me drooling.

As the festival is approaching, orders for  bak chang are pouring in for rice dumpling makers.

Unlike the old days, when one could get a standard-sized rice dumpling for RM1.20 to RM1.80, the slower economy and inflation saw a continuous price hike on bak chang which causes many to fork out more for a good one.

A ‘Kaki Masak’ group as they call themselves of seven friends recently gathered to learn how to make bak chang.

Thrilled to make their own version of bak chang, they rolled up their sleeves to prepare the ingredients like mushrooms, uncooked glutinous rice stir-fried with shallot and garlic, and cooked marinated pork.

“My late mother was a great cook. Making bak chang is one of her great talents. We all love her dumpling very much, so we did not bother to learn from her, as we knew we were unlikely to produce a dumpling just as tasty.

“Six weeks after, she succumbed to the cancer and left us abruptly.  I truly miss her and her cooking. Though I like to cook, I am not confident enough to make bak chang. I feel lucky that our Kaki Masak bunch agreed to gather to learn together,” said the 42-year-old tuition teacher.

Mak hopes to be able to reproduce her mum’s bak chang, using the opportunity to reminisce about her.

Lee Jia Ying, 27, who was making bak chang for the first time shared her love for it.

“The most common bak chang which is my favourite type is the one with glutinous rice, pork belly, mung beans, shiitake mushroom, and salted egg yolk.

I love the delicious bak chang made by my great aunt.

“In recent years, rice dumplings sold on the market have become so expensive and the size has shrunk. I’m not happy with the reduced fillings and the taste is not as delicious so I want to make one myself,” she said.

Another reason contributing to the price hike, according to another friend in the group, Sin Yean Yean, is the bamboo leaves.

“The ingredients are expensive and the bamboo leaves getting even more expensive. I guess making bak chang at home is a more economical way to enjoy the festivities, despite the hard work,” Sin said.

Sin also revealed that she makes halal bak chang where pork is substituted with chicken.

“People may say that the taste is not the same, but I am more than happy to share the festivities with my Muslim friends.”

“It’s not difficult to make dumplings,” Sin said. The challenging part is preparing the ingredients while another challenge is wrapping a nice firm bak chang.

Sin often gets orders from Muslim friends who crave for her halal chicken bak chang.

“I told them my kitchen is not halal, but they don’t mind. So to make halal bak chang, I use a new set of kitchen utensils, cutlery etc to show respect for my friends.

The Dumpling Festival or ‘Duan Wu Jie’ in Mandarin is a colourful festival celebrated on the fifth day of the fifth month of the lunar calendar. Legend has it that the traditional food was started after an incident involving patriotic Chinese poet Qu Yuan who served the Emperor in the Chu Kingdom.

Qu was a good minister well-loved by the people but evil court officials jealous of Qu’s popularity and abilities influenced the weak-minded emperor who dismissed and exiled him.

Disheartened and disappointed, Qu Yuan tied himself to a rock before jumping into the river.

When the people learnt of the incident, they rowed their boats to the river to look for his body. When they failed to find it, they started beating their drums and making loud noises near the river in the hope of scaring away fishes and sea creatures so they would not feed on his body.

Others made rice dumplings to throw into the river in the belief that the sea creatures and fishes will eat them instead of Qu’s body.

Since then, every fifth day of the fifth month of the lunar calendar was recognised as ‘Duan Wu Jie’ or the Dumpling Festival to commemorate the incident.