Saturday, February 22
You are at:Home»Features»The untold tale of Pua Kumbu 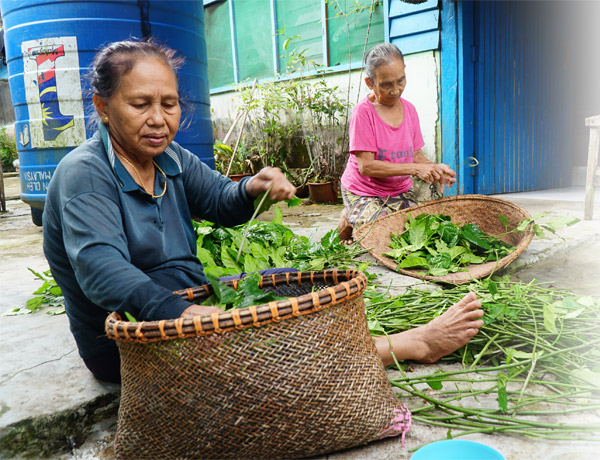 THE 1865 fantasy novel ‘Alice in Wonderland’ written by Lewis Carroll, tells the story of a girl named Alice falling through a rabbit hole — entry into the unknown, of adventure and beauty. Such was the case of Dr Weylene Jeffery Jehom when she stumbled into the enigmatic world of the Pua Kumbu, only that this time it was not the fictional fantasy adventures but an authentic and sacred journey.

The Pua Kumbu, the Iban hand-woven textile, represents the heart of the Iban culture. And just like the Alice in the Wonderland — Weylene became ‘curiouser and curiouser’ towards the art of Iban weaving, that she spent two years just searching for the weavers and master weavers. Her sole desire was to experience the traditional culture and raw skills of dyeing and weaving.

The prime reason for Weylene’s journey of discovery was to understand and appreciate the root and soul of Pua Kumbu. She was seeking to unravel the untold tales of weaving waiting to be told by the master weavers in the much remote lands of Rumah Garie, by the Kapit River, Sarawak.

Little did Weylene know that her hunt to explore the origin of weaving would reveal a pathway so sacred and spiritual.

The tales are old — over 600 years — entwining and reviving more than 200 folklores.

In her exhibition, Weylene proudly takes the visitors around her collection of the Pua Kumbu. Some, of which are newly weaved while the others are over 200 years old. 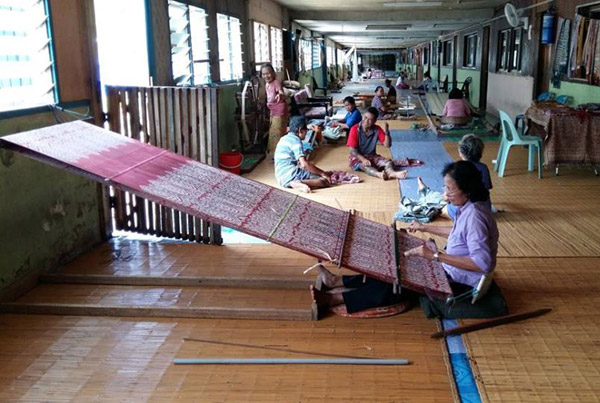 According to the master weavers, the intricate patterns and designs sprawled out artistically on the yarn is not an outcome of personally planned artwork that they doodle and weave respectively. The detailed patterns are whispered and shown to them in their dreams by the gods and the Divine Source.

Those sacred dreams and visions are only for the chosen ones who must materialise them into the form of motifs, symbols and colours on the yarn.

Each motif depicts a fascinating tale to be interpreted by the eyes of the beholders, and the story is to be adhered to.

The ancient recipes for natural dyeing have also been passed and practised spiritually with solemn obedience.

The weavers also firmly believe that if there is any void in the initiation by the master weaver, then bad omen looms over the community as a whole.

Hence the patterns must not in any way be disregarded, as they are direct messages from the Divine.

One must submit and commit to the Divine wholeheartedly to be a master weaver. 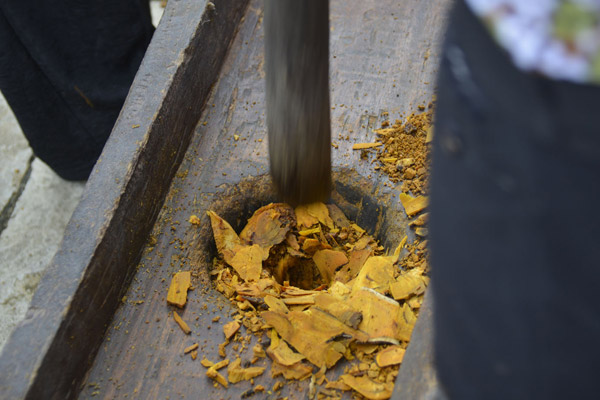 Manually pounding the roots of Mengkudu.

Due to such solemn involvement with Divinity, the community of the weavers religiously performs numerous spiritual rituals, such as cleansing the entrance with raw eggs, before they engage themselves in treating the yarn for weaving.

Fascination can be drawn from the bare fact that before the long process of weaving commences, the whole house is cleansed ceremonially, followed by prayers and chants to cast any evil spirit away.

The weavers make ceremonial rounds carrying leaves around the place where the sacred weaving of the yarn would take place. They also create a spiritual passage with threads to secure the weaving ground.

Furthermore, before the weavers opt to deal with the yarn, they have to perform self-cleansing by bathing in the river.

Once the rituals have been performed such as treating the virgin yarn with heated ginger water, sea salt, essential oils and leaves — the blessed white yarn are ready to be weaved and ready to capture the multi-coloured patterns of many ardent tales waiting to be told and heard.

One such spell-binding tale is that of the young virgin — Kumang and her lover Keling which can be intricately and ardently depicted in the woven patterns.

Weaving the Pua Kumbu is a long process, demanding persistent dedication and enthusiasm from the weavers.

It starts with preparing the yarn for the weaving: Nabu (winding the thread into balls); Ngirit (the process of stretching and pulling a skin of thread horizontally, one thread at a time, to form the base or warp); Ngarap (the selection of alternate warp); Negi, Nipan and Ngebat (tying).

Once the yarn is conditioned, it is ready to be dipped in natural dyes. 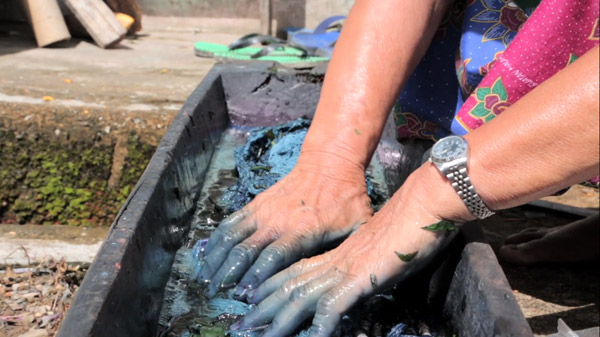 The Iban have traditionally made use of natural ingredients extracted from plants to produce beautifully rich dyes. An example being Engkudu (Morinda citrifolia) a plant when mixed with associated ingredients would produce shades of red. Weaving comes only after the dyeing.

The progress from a vision and story as given in the dream to physical form requires an immeasurable amount of patience, dedication and love for the tradition.

The preparation of the yarn and conditioning it with natural elements such as ginger and lime, to the natural dyeing and weaving steps, all require patience and hard work. One piece could take up to one year to complete.

It is said that many a time we don’t know what we have until it is gone. It is sad that this could be the case of the Pua Kumbu.

This unique and distinctively Iban art and culture could very well be lost in time. The younger generation seems not too keen about weaving.

Another reason for this dying culture is the issue of economics. Hence, to keep the Pua Kumbu tradition going, Welyne has set up an e-commerce platform to help them sell their products.

In her interview at her recent exhibition at the Old Courthouse, Kuching (12th July to 16th July) Weylene mentioned that her dream is to hold onto the traditional and mesmerising techniques of Iban weaving.

She aspires to inspire the younger generation who deserve to be well informed about such a unique art that has been practised since earlier times.

It is a form of art that needs to be prominently projected nationally as well as globally.

Weylene’s flame to rekindle the tales of Pua Kumbu has led her to carry out exhibitions promoting the Iban culture in the whole of Malaysia, France, California, India and Bangladesh.

She aims to instil amongst people the authentic theme of Iban weaving using only natural dyes and the appreciation on how the colourful symbols and motifs tell so many stories about history and beyond. 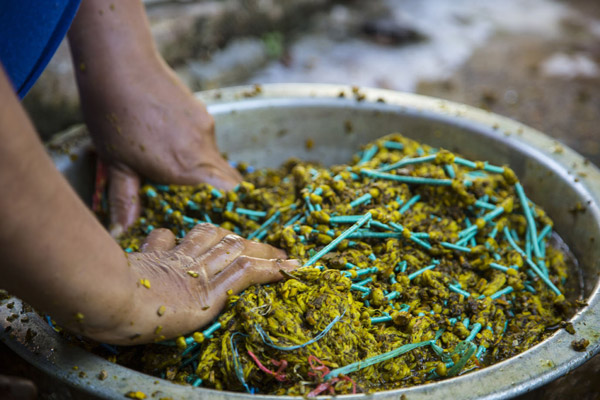 Mixing Rengat with lime/kapur to fix the blue dye to the yarn.

Weylene strives to spread the interest of weaving amongst the youngsters so that they are aware of the true spirit of Iban weaving.

She believes that it is not just weaving but a magical heritage waiting to be lived for aeons to come. It is a tradition which combines art and nature.

For these reasons, Weylene staunchly supports the idea of preservation of natural resources and traditional value as she seeks to promote ‘all natural sources of dyes’ which uphold the true essence of Iban weaving.

Her love for weaving can be seen from her exhibitions and the interviews of the weavers and master weavers.

From the interviews, it is evident that the remaining Iban weavers, though getting old but they still wilfully dedicate their souls towards making of the scared Pua Kumbu.

Weylene’s persistent attempts in extending the flavours of Iban weaving to the modern societies is most praiseworthy.

She remains mesmerised by the magical tales of the Pua Kumbu, and her passion towards such a sacred textile draws much attention from all who have come across her work and findings.

Those who are yet to be told about the untold are missing out on this brilliant art. However, it is a two-way process — for  ‘those who do not believe in magic, would never find it’. 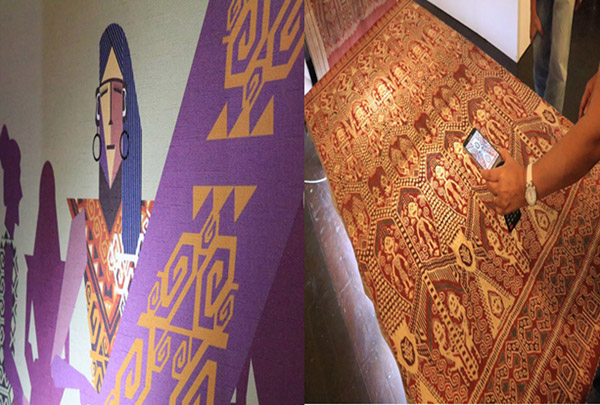 Each weaved thread of the Pua Kumbu depicts a story of a thousand words and beyond. It draws in characters who tell tales of love, honour and mesmerizing emotions. The symbols shown above on the intricately weaved pua are emblems of the mighty Keling considered as the Iban hero and the epitome of beauty– the astoundingly beautiful Kumang. The threads entwined together convey their love story and struggle afterwards when Kumang was taken away from Keling. The prominent symbol of a monkey weaved in patterns is said to be Keling, who loses his mind when Kumang is taken away from him. He swings from trees and gallops through the mazes in the forest in search of his love. His determination and unconditional love eventually helped him locate Kumang in the dark depths of the wild forest. Their unity sparked up passion once again, and their bond told more tales at the end. 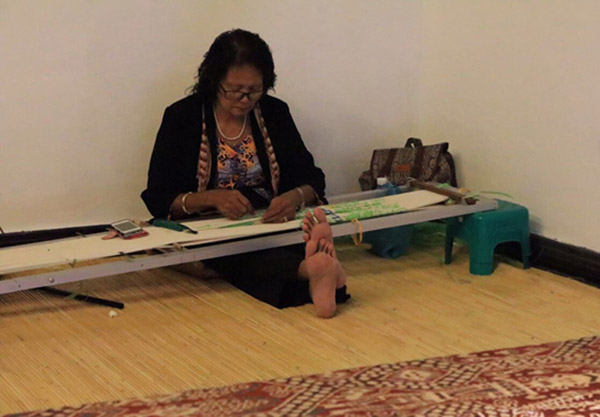 Bangieak Embol is a Pua Kumbu masterweaver from Rumah Garie, Kapit, Sarawak, Malaysia. She is a UNESCO recognized master weaver. She has mastered this form of art and is indeed an authority of Pua Kumbu weaving. Bangie has brought together a solid chunk of the Iban community to commit to the art of Iban weaving. According to her, the Pua Kumbu must be respected not only by the master weaver, but the community as a whole. The process of weaving requires the community to come together ceremonially and perform various forms of rituals in order to have a blessed journey of weaving. The patterns portrayed in the Pua Kumbu are communicated to her by the Divine force in her dreams which she religiously follows through every thread carrying the command of the dream. The art actually possesses life and spirit which turns the Pua Kumbu into noble treasure.