Sunday, July 5
You are at:Home»News»Sarawak»Felcra signs MoU on algae production 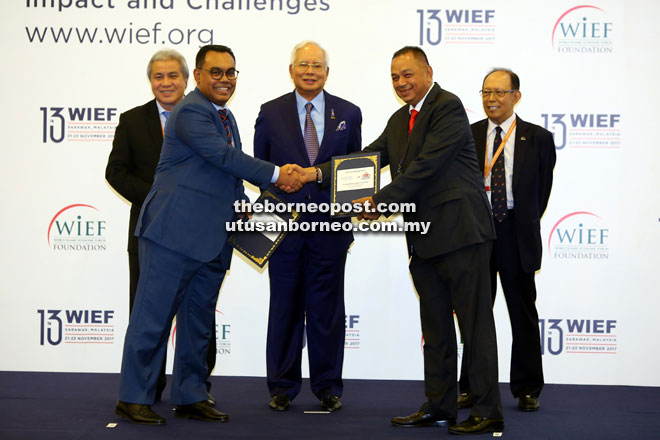 KUCHING: Felcra Berhad and Algatech International Sdn Bhd sealed a partnership to explore and develop the algae industry with focus on commercial production through a memorandum of understanding (MoU) yesterday.

“Algaculture is a new form of agriculture farming in Malaysia with high technology using oil palm residues or bio resources dumped from factories into pond,” Zulkarnain told reporters during an interview.

“The pond can be prepared for algae cultivation. Algaetech is actually the farming of species of algae, for the extract to be turned into superfood or vitamins,” he elaborated.

In some of the European countries and the United States, Zulkarnain pointed out that algae is used to produce ‘astaxanthin’, an antioxidant which is 6,000 times stronger than vitamin C.

“For Felcra, we see the high potential and good opportunity in this new sector.

“As such, we want to explore further the algae pond in Felcra, which will be an extension to our present resources,” he emphasised.

To a question, Zulkarnain said algae is a food supplement that offers numerous health benefits similar to Kelulut honey.

“This is a new industry with high technology which Algaetech has established in recent years.

“So through this MoU, we are confident to develop at least one algae food supplement product by the middle of next year,” he said.

“We could also explore Virgin Palm Oil (VPO) together with Algaetech as this is something yet to be tapped. The VPO can be extracted using cold press method,” he added.

Felcra and Algaetech, Zulkarnain continued, are currently carrying out a study on VPO, which will be made a premium product to replace Virgin Coconut Oil (VCO) and Virgin Olive Oil (VOO) in the future.

The first algae pond, he added, is expected to be established in Seberang Perak and if successful, would be expanded to all six Felcra palm oil mills as well as four other joint venture enterprises throughout the country.

The exchange of MoUs with an estimated value of US$2.5 billion was the largest in the history of WIEF.

In the last five years, WIEF has facilitated trade deals from diverse industry sectors among both Muslim and non-Muslim nations amounting to some US$13 billion.