Tuesday, July 5
You are at:Home»News»Sarawak»Baru feels honoured to be appointed Minister of Works

“I am conscious of the fact that the responsibility attached to this portfolio is a heavy and onerous one,” he said in a press statement after the swearing in ceremony at Istana Negara today.

Baru, who is also Selangau MP and Ba Kelalan assemblyman, wanted to thank Dr Mahathir for his confidence in him.

“I will endeavour to do my best to ensure that the Works Ministry is efficient, transparent and accountable in all its dealings. I humbly ask for your prayers as I embark on this new job.” 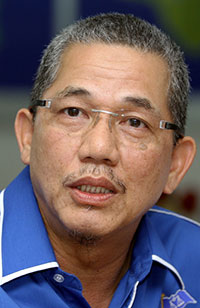 Meanwhile, Baru’s predecessor Datuk Seri Fadillah Yusof congratulated Baru for his appointment as the Minister of Works and thanked the PH Government for appointing an elected representative from Sarawak to succeed him.

“The appointment of an elected representative from Sarawak is in line with the need to ensure that the mega projects such as Pan Borneo Highway can be continued and implemented successfully.”

Fadillah, who is Petra Jaya MP, hoped that Baru would ensure that Pan Borneo Sarawak and Sabah project continues as planned and approved by the previous government, for the convenience of the people in both states.

“This is because the toll-free Pan Borneo will link not only major cities along the federal roads in Sarawak and Sabah, but also become the catalyst for the development of these cities; opening many job opportunities to local people; connecting industrial centers such as ports, factories, commercial centers throughout its ranks; enabling economic opportunities to be explored in potential areas; providing faster, comfortable and safer travel and saving travel time and transportation costs between major cities.”

“I would also like to extend my appreciation and thanks to all the Ministry of Works and agencies, especially the Public Works Department (JKR), Construction Industry Development Board (CIDB) and the Malaysian Highway Authority (LLM) for the cooperation given to me throughout the ministry.

“I hope that similar cooperation will be given to my successor and I hope that KKR and agencies will continue to prosper.”