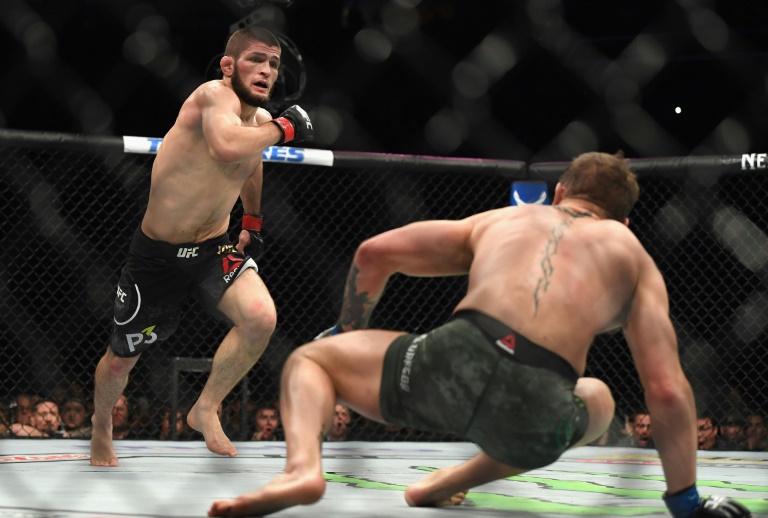 Nurmagomedov improved to 27-0 in his professional career — 11-0 in UFC bouts — with the win at a sold-out T-Mobile Arena in Las Vegas.

McGregor managed to stay on his feet for most of the third round, but the once feared striker couldn’t hurt Nurmagomedov and in the fourth, the champion took him down again.

McGregor managed to roll away briefly before Nurmagomedov ended up in a full mount, getting him in a brutal rear-naked chokehold that had McGregor tapping out at 3min 3sec of the round.

Nurmagomedov had barely released his hold when he launched himself over the Octagon fence, apparently targeting McGregor’s training partner Dillon Danis.

As security tried to quell the chaos in the crowd, two people from Nurmagomedov’s camp leapt into the cage, one of them taking a shot at the exhausted McGregor, who eventually departed in a huddle of security personnel.

Nurmagomedov was also hustled out surrounded by security officers as the pro-McGregor crowd jeered and threw drinks at him.

UFC chief Dana White refused to hand Nurmagomedov his belt, saying he feared it would further inflame the crowd.

“If I put this belt on you, everyone’s going to start throwing shit into the Octagon,” he told Nurmagomedov.
The ring announcer declared Nurmagomedov the winner after both fighters had departed.

Nurmagomedov told reporters that Russian President Vladimir Putin had called to congratulate him.

He also criticized McGregor for trash-talking, saying: “This is a respect sport.”

White said that the Nevada Athletic Commission, which oversees combat sports in the state, was withholding Nurmagomedov’s purse pending an investigation.

“It’s a big deal,” White said, adding that three members of the Russian’s camp were briefly detained by police.

White said a suspension and “big money fines” could be looming for Nurmagomedov, who might also find himself facing difficulties obtaining a visa to fight in the United States in the future.

McGregor was returning to mixed martial arts for the first time since November 2016, having detoured in 2017 to a cross-combat boxing bout against Floyd Mayweather which ended in defeat — but still earned McGregor some $100 million.

His return sparked massive interest, with White predicting the bout would break the UFC record of 1.65 million pay-per-view buys.

The crowd included a mass of chanting, flag-waving Irish fans as well as a sprinkling of celebrities including Hollywood stars Matt Damon and Mel Gibson and Northern Ireland golf star Rory McIlroy.

Taking on the powerful champion from Dagestan in his comeback fight was a risk for McGregor, but the drumbeat for a showdown between the two intensified in April, when McGregor was at the center of an extraordinary melee in New York.

McGregor hurled a dolly through a window of a bus filled with other UFC fighters at the Barclays Center — apparently angered that Nurmagomedov had intimidated one of the Irish fighter’s friends, Artem Lobov.

Two athletes were injured and McGregor pleaded guilty to disorderly conduct in a Brooklyn criminal court in July in a plea deal that allowed him to avoid jail time.

All felony counts were dropped and he was ordered to do five days of community service. – AFP