Wednesday, April 1
You are at:Home»Business»Important for Malaysia to strengthen resilience — Zeti 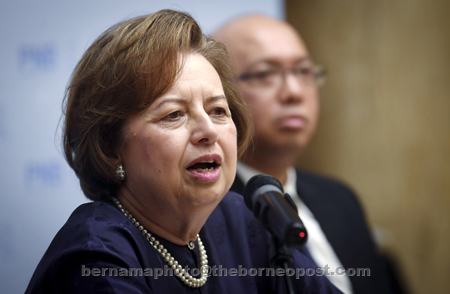 It is important for Malaysia to further strengthen its resilience against any uncertainties in the global economy as well as political developments that may affect growth, says Zeti. — Bernama photo

KUALA LUMPUR: It is important for Malaysia to further strengthen its resilience against any uncertainties in the global economy as well as political developments that may affect growth, said Tan Sri Dr Zeti Akhtar Aziz.

The former Bank Negara Malaysia (BNM) governor said the country would have to build up its strength and resilience and this would require strengthening institutional buffers and internal capabilities.

“When I was at the central bank – I was there for 35 years – I have always told the staff to take political developments as a given. Why do you take it as a given? (Because) you have no control over it.

“Of course, external developments are also taken as a given because it is not within our means to influence; therefore, the most important thing to do is to build up your resilience.

“Just like your health. If your health is weak, you will be vulnerable to diseases,” she said during an interview with selected media recently.

Zeti, who left the central bank in April 2016 after 16 years at the helm, said this when asked whether the development in the domestic political scene would affect investors’ sentiment.

It was reported that foreign funds had reacted to the unprecedented outcome of the country’s 14th General Election by disposing RM2.48 billion of local equities a week after the May 9 election.

According to MIDF in its fund flow note on May 21, this was the heaviest weekly selldown in Malaysia since the week ended August 23, 2013, with a net outflow of RM2.90 billion while the first trading day after GE14 saw a net outflow of RM682.6 million.

Asked whether the country would be able to weather this transition period and uncertainties in the global economy, Zeti replied that Malaysia would manage as the country had repeatedly demonstrated its resilience.

“Yes, we can be set back but we always have the ability to bounce back.

“Why is that? It is because we have the element of resilience in our economy and in our financial system,” she pointed out.

Zeti also defended certain policies such as the reintroduction of the Sales and Services Tax effective on September 1, explaining that the implementation of the new tax regime was to reduce the burden and enhance the economic wellbeing of the society.

“When we formulate any policy, we need clarity relating to the objective of what is to be achieved.

“If your objective is only to mobilise revenue, then of course the Goods and Services Tax will mobilise a significantly higher amount of revenue.

“But sometimes, you have to take into consideration other objectives as well. One important objective is economic wellbeing,” she noted.

Zeti further explained that sometimes the country would need to tolerate a slightly higher deficit if the need arose, to keep the economy growing.

“What I am saying is that, while understanding that we have to tolerate for a short period of time probably a larger deficit, we also have to demonstrate what we are going to do to bring about a return to fiscal sustainability. That has to be demonstrated,” she added.

On the rising income inequality in Malaysia, Zeti, who was part of the Council of Eminent Persons, said the main measure to address the situation was through education.

She pointed out that the education system needed to be reformed continuously to adapt with a highly dynamic environment due to globalisation.

“You have digitalisation and the fourth industrial revolution.

“All these are happening and of course, we can’t stay with the kind of education we have had before. It produced the kind that lived in the previous environment.

“The new environment is different (and) if we do not keep up with it, we are not going to produce the kind of workforce and graduates that are required by the industry, the kind of talents and skills to survive the world,” she stressed. — Bernama

Previous ArticleBudget 2019 to accelerate the adoption of Industry 4.0
Next Article Crowdfunding to encourage building of more houses — Dr M