Tuesday, January 25
You are at:Home»News»Sarawak»Indications suggest Riot may be joining PSB 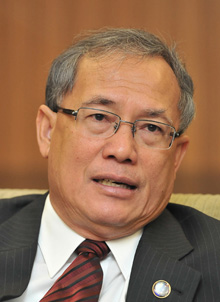 The Serian MP was seen escorted out of the restaurant by PSB president Dato Sri Wong Soon Koh after shaking hands with the other leaders.

When asked on his presence at the premises, Riot said: “I just happened to be there to meet a friend.”

It is not be far-fetched to think that Riot would be making a political move following a series of developments involving him in SUPP.

PSB is the rebranded name for United People’s Party (UPP).

Apart from Riot, it was also speculated that former Parti Rakyat Sarawak (PRS) deputy president Datuk Joseph Entulu Belaun might be joining PSB. His political speech at a restaurant in Kanowit on Feb 9 stating that PSB would be contesting in several seats in the next state election may have given away his cover as a party-less politician.

Entulu, the incumbent MP for Selangau then, was booted out of PRS on the eve of nomination day in the last parliamentary election along with four other supreme council members for undermining the party.

The sacking disqualified him from contesting on the Barisan Nasional (BN) ticket in Selangau, prompting him to not seek re-election. In the end, Selangau was wrested by Parti Keadilan Rakyat (PKR) candidate Baru Bian.