Friday, June 5
You are at:Home»Columns»A Buddhist lesson for nation building 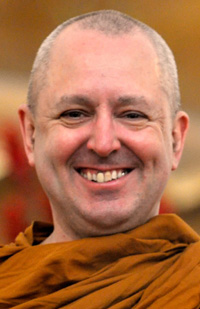 IN this column, I wish to draw some valuable lessons I have learned in my own spiritual quest that I think offer deep insights into our education and nation building efforts.

In my many learnings about spirituality, I have read and listened to lectures by scholars and others. Some are priests from one faith, while others are monks from other religions. I have also listened to those who disagree with any religion based God construct, who define enlightenment and spirituality in more meaningful ways than from those of traditional religions. I have learned thus far, that there is an ocean of difference between the idea of religion and the meaning of spirituality. Both of these concepts and ideas should be synonymous but believe me, many times they are not and are as different as black and white. One of my all-time favourite speakers that I listen to on YouTube a lot is a man who many refer to as Ajahn Brahm.

Ajahn Brahm is a Buddhist monk and his full Buddhist name is Ajahn Brahmavamso. He is 67 years old and hails from the UK, with the Western name of Peter Betts. Betts graduated as a scholarship student in theoretical physics. He became a teacher for a year and then moved to Thailand to be a Buddhist monk at the age of 23.

His teacher Ajahn Chah supervised the young monk in the forest tradition of Theravada Buddhism. Nine years later, the young monk was dispatched by his Order to Australia to establish a centre there. Ajahn Brahn worked tirelessly and soon had a centre in a large forest area in Australia. In between managing the centre, he delivers lectures all over the world not only to Buddhist monasteries and temples but also to secular seminars on psychology and healing.

The roundish and good-natured monk also finds time to visit and sit with the sick, the dying, and those in prison giving comforting words and just making their days meaningful with his presence. At the centre, he teaches meditation to a thriving Buddhist community as well as those interested in calming their hectic lives.

In many of my own talks with students, academics, and the public, I have asked that one question and have never gotten anyone to answer it correctly, including myself when I first heard it. I could answer the second question and had a pretty good idea about the third. But the first question was the most difficult one of all. When I ask that question to the audience listening to my talks, I get almost the same answer I thought of when I tried to answer it. Some would say their mother, or father, or wife. Married people tend to answer that way but the young adults who are unmarried would give other answers.

The answer to the question of ‘who is the most important person’ is … the one in front of you! When I first heard the answer I was impressed. But 10 years after that, I found a deeper meaning in that very answer to my struggles with the idea of education and nation building as well as the foundation of great spirituality.

The most important person is the one in front of you. On a basic level, all of us have learned simple manners and it is most important and polite to listen and be attentive to whomever is talking to us. That’s basic adab or manners. You do not turn your head away or hum a tune while someone is having a conversation with you while looking at you directly. Even such simple manners are sometimes or often times neglected in our WhatsApp world and minds full of modern lifestyle and work concerns.

To me, the anchor and foundation of Buddhist thought that I admire and love so much is ‘stillness’ and ‘compassion’ or ‘caring’. Buddhism teaches the mind to be absolutely still and calm but also to fill the heart with love and compassion for others, from ants to human beings.

Imagine if this simple message were to be taught in our school and university education. Our education simply puts information into our children’s heads and turns them into worker bees. The religious curriculum that we fill in our heads whether in school or at our respective religious buildings simply pits us against ‘the other’.

But what Ajahm Brahm teaches crosses religious, cultural and racial boundaries. It does not matter who is in front of us at one particular time, he or she must be given the dignity that any individual deserves as a human being with a soul. Whoever we meet and greet, and talk to or have discussion with, we owe it to ‘the one in front of us’ the respect and patience to deal with issues of mutual concerns. What would happen to our so-called ‘difficult’ race and religious conflicts then? They would disappear! Why? Because we have to acknowledge and give presence to whomever we are dealing with at any moment in time. Such a simple lesson!

This lesson would make the client of a company happy because the company is giving due concern for him or her. This lesson would turn our one million civil servants in the government of Malaysia as willing workers and ‘slaves’ to the rakyat’s needs regardless of race, religion, or political affiliation.

Our education divides us into race through a historical narrative that emphasises one race above the others. Our religious teachings further differentiate and isolate us as a people. Our politics kills any other sense of caring or concern about the other. We live in a nation toxic with our secular and religious education constructs.

It is time we look at what exactly we are doing and press the pause button. Are we on the right track of nation building? Are we on the right path towards a goal of common happiness? I think not. Until and unless we embrace the simple lessons that Ajahn Brahm gives us, we will never find a true path of peace and meaningful prosperity for all of us and our children’s future.