Friday, June 5
You are at:Home»World»What we know about the Gulf tanker attacks 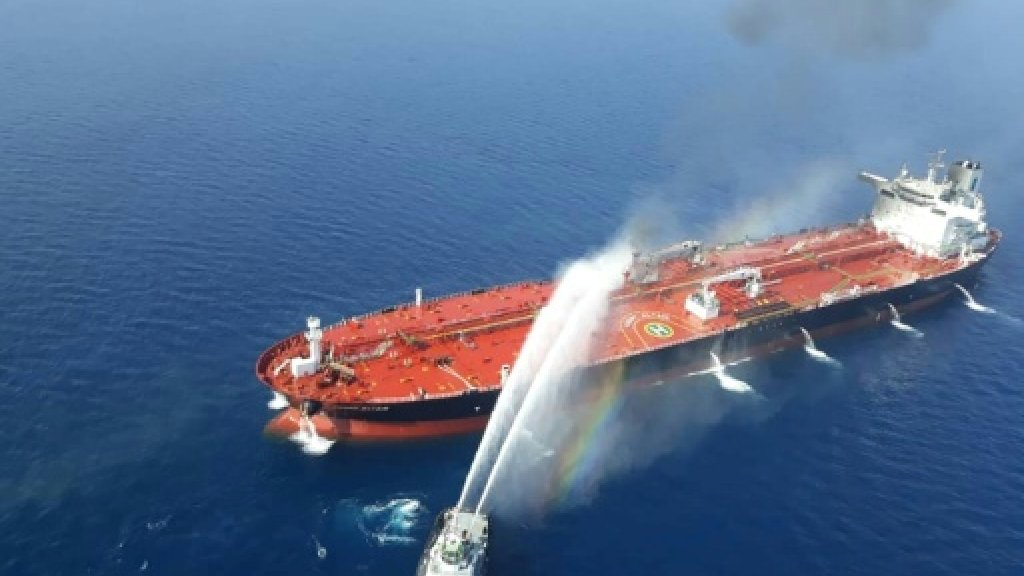 Tasnim news agency picture reportedly shows an Iranian navy boat trying to control fire from the tanker Front Altair said to have been attacked in the Gulf of Oman. AFP Photo

The strikes on Thursday follow last month’s sabotage attacks on four ships off the United Arab Emirates that Washington blamed on Tehran.

Amid rising fears of a conflict, here is what we know:

In the early daylight hours of Thursday, two vessels transiting through the Strait of Hormuz towards the Indian Ocean caught fire.

The Front Altair tanker, owned by a company listed on the Norwegian stock exchange, was hit by three explosions, according to the Norwegian Maritime Authority.

The ship was carrying naphtha, a refined petroleum product, from Qatar to Taiwan.

The Japanese-owned Kokuka Courageous, loaded with methanol, was hit by a “flying object” before suffering a second blast on board, the operator’s head said, relaying eyewitness reports from the ship’s crew.

The US Fifth Fleet, based in Bahrain, said it received two separate distress calls, one at 6:12 am (0212 GMT) from the Front Altair and a second at 7:00 am from the Kokuka Courageous.

The USS Bainbridge observed an Iranian Revolutionary Guard patrol boat and multiple smaller crafts near the Front Altair, a US navy spokesman said.

The ship’s crew, scooped up by a nearby vessel, were then transferred to Iranian boats, the spokesman added.

Iran later aired footage of the 23 rescued sailors on its English-language Press TV, saying they were in “full health”.

The 21 sailors from the Kokuka Courageous abandoned ship after “discovering a probable unexploded limpet mine on their hull following an initial explosion”, the US navy spokesman said, adding they were picked up by a Dutch tugboat.

The sailors were transferred to the USS Bainbridge and US Central Command later released a video it said showed an Iranian patrol boat removing the mine from the ship’s hull.

On Friday, the crew was back aboard the Kokuka Courageous and headed to the United Arab Emirates port of Khor Fakkan, according to a spokesperson for the vessel’s Singapore-based BSM Ship Management.

– Who was behind the explosions? –

There has been no claim of responsibility for the blasts.

Both ships have indicated the attacks originated from the surface, said maritime security company Dryad Global.

But it said reports from the Front Altair indicated its hull was breached “on the starboard side partially below the waterline”.

The Kokuka Courageous was also hit on the starboard side, according to its managers.

Washington was quick to point the finger at Tehran, with Secretary of State Mike Pompeo warning the US would defend its forces and allies in the region.

Zarif called the accusations “baseless” and said the US was resorting to “sabotage diplomacy”.

Global oil prices surged by four percent immediately after reports of the attacks.

UN chief Antonio Guterres strongly condemned the “security incident” and said the world could not afford a major confrontation in the Gulf.

The European Union called for “maximum restraint” to avoid a regional escalation.

The UAE said the twin attacks marked a “dangerous escalation”.

The Gulf of Oman lies at the eastern end of the strategic Strait of Hormuz, a narrow channel that is a chokepoint for more than a third of the globe’s seaborne oil exports.

Iran has repeatedly threatened to close the Strait in the case of a military confrontation with the United States.

Thursday’s incidents come a month after four oil tankers — two Saudi, one Norwegian and one Emirati — were damaged in still unexplained attacks off the nearby UAE port of Fujairah.

US National Security Advisor John Bolton said Iranian mines were almost certainly behind the May 12 attacks, but declined to provide evidence.

The UAE said last week that initial findings of a five-nation investigation indicated a state was likely behind the attacks in May, but added there was no evidence yet of Iranian involvement.

Washington had on May 5 sent an aircraft carrier group and B-52 bombers to the region over Iranian “threats”.

On May 8, Iran said it would stop respecting some limits on its nuclear activities agreed under a landmark 2015 deal with world powers, since abandoned by the US.

A week after the May 12 attacks, US President Donald Trump warned that if Iran attacks American interests “that will be the official end of Iran”.

“Any miscalculation or misunderstanding risks a spiral toward more direct confrontation,” she told AFP. – AFP