Sunday, February 28
You are at:Home»News»RM5 million put aside annually to develop performing arts 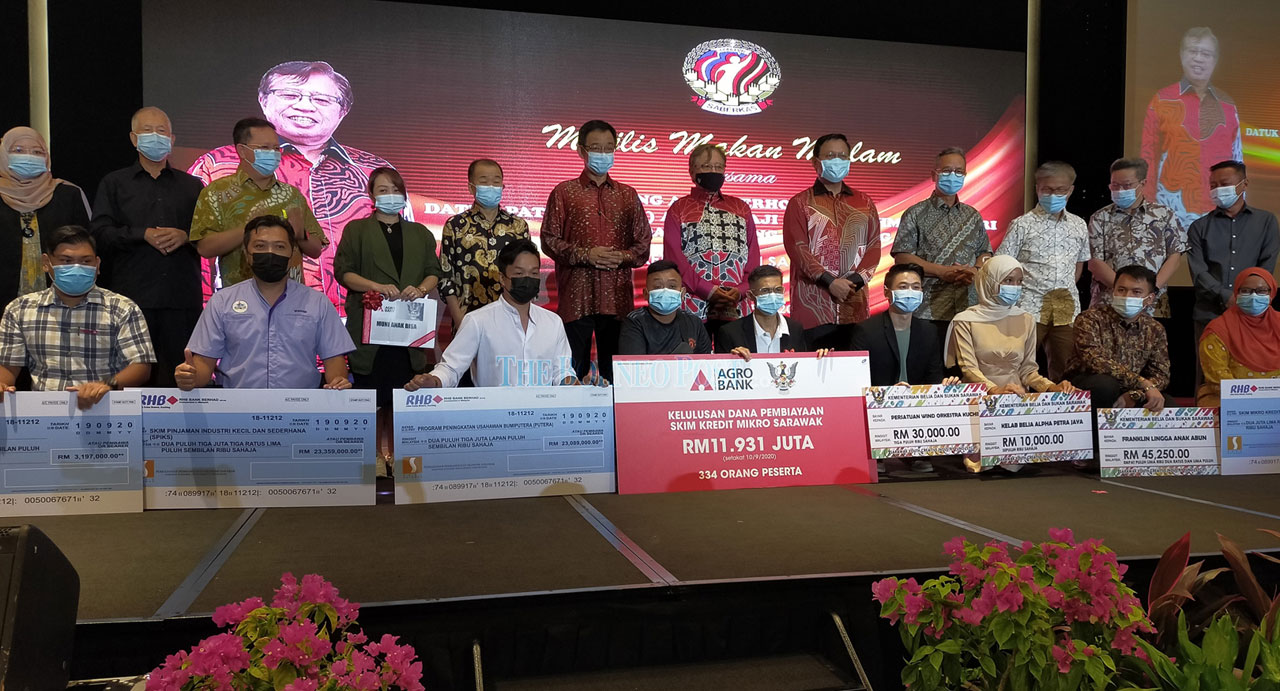 Abang Johari (standing, seventh left) and Abdul Karim, on his right, join other guests in a photo-call with the recipients of the financial assistance schemes.

MIRI: The Sarawak government would allocate RM5 million annually to boost and develop the performing arts industry, especially those involving youths here.It is hoped that the allocation would help polish the young talents in the state and bring them to a higher level, said Chief Minister Datuk Patinggi Abang Johari Tun Openg.

Moreover, he said the fund could be used to produce short films involving young talents, meant to promote the culture of Sarawak.
“We already have our own television station, and through it we can broadcast our short films not only throughout Malaysia, but also to the world, because it uses satellite,” he said in his address for Sarawak United National Youth Organisation (Saberkas)’s 16th triennial general meeting at a hotel here on Saturday night.

“In the singing industry, we have Dayang Nurfaizah; in Hollywood, we have Henry Golding who is from Betong; we also have another talent from Sibu who is doing well in the Hong Kong film industry,” said Abang Johari.

“This proves that Sarawak never lacks talented youths in performing arts and culture.”

For the record, all recipients of these schemes are youths.

Meanwhile, Minister of Youth and Sports Datuk Abdul Karim Rahman Hamzah, who also spoke at the dinner, said Saberkas would be adopting the age limit of 16 to 40 years for all its executive committee (exco) members.

“We had a post mortem (meeting) just now and we could see that they wanted to see the exco being made up of younger people. So, for exco members we will follow the government’s guideline, that youths are those aged 40 years old and below.

“It was agreed by the general meeting, we would have to adopt it and make arrangement to inform the ROS (Registrar of Societies),” he disclosed, adding that with the change, Saberkas would be following the definition of youths in the country and the world.

In his address as the newly-elected Saberkas president, Abdul Karim announced an allocation of RM5,000 for all registered Saberkas branches in the state, for them to carry out their meetings and activities smoothly.

“Apart from this allocation, you (Saberkas branches) can also ask for funding from your respective ‘wakil rakyat’ (elected representatives),” he added.