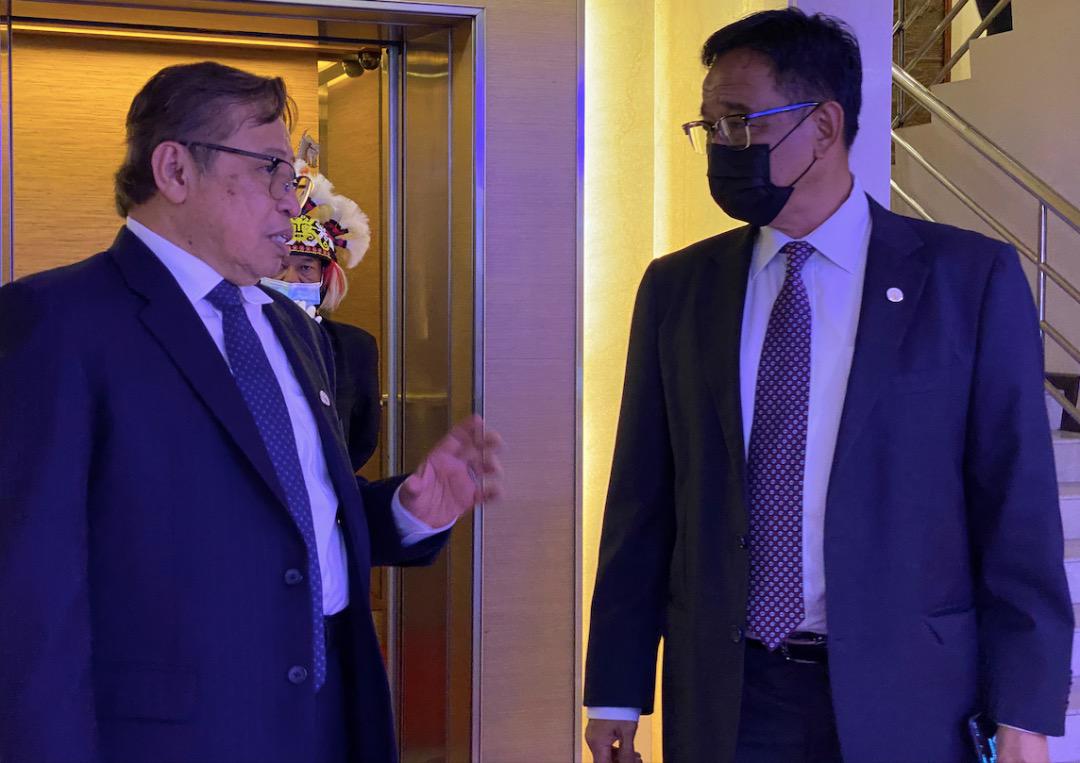 Abdul Karim (right) having a chat with Abang Johari.

He said Sarawak’s tourism sector is in need of a boost as it has grown significantly over the past decade in terms of contributing to the growth of the state’s economy and bringing in foreign and domestic tourists.

“However, the situation is dampened by the Covid-19 pandemic coupled with the movement restriction which has caused a sharp decline in travel and leisure activities.

“As what the Chief Minister had mentioned in his budget speech, our tourism sector is one of the badly hit by the Covid-19 pandemic and it had also impacted on the lives of our local folks who are involved in the industry at all levels.

“Thus, it is important for the government to continue to provide allocation to develop new tourism attractions while upgrading the existing ones which will be ready to receive the expected influx of tourists when the situation had improve,” he said in a statement today.

The Asajaya pointed out that Chief Minister Datuk Patinggi Abang Johari, when tabling the 2021 State Budget at the State Legislative Assembly (DUN) Sitting this morning, had noted that the proposed allocation are for the development, refurbishment and improvement works on the Sarawak Culture Museum, Santubong Archaeological Park and Wallace Centre, Performing Arts Centre at the Old DUN Building, cascading waterfall at Fort Margherita, upgrading of Wind Cave and Fairy Cave, upgrading of forts including Fort Emma, Fort Lily, Fort Brooke and Fort Sylvia, transformation of Brooke Dockyard into a Maritime Museum, and Sadong Jaya mangrove tourism.

“We would like to record our appreciation to the Chief Minister for the proposed allocation which showed how much the Gabungan Parti Sarawak (GPS) government has always placed the well-being of the people as the priority in all of its planning and actions.

“This is also in line with our struggle in protecting the rights and safeguarding the interests of Sarawak under the motto ‘Prioritise Sarawak; Sarawak First’,” he said.

He said with this commitment, the 2021 State Budget will focus on the need to revive and redevelop the state’s economy by accelerating the implementation of various infrastructure projects including infrastructure facilities, public facilities, digital economic initiatives, housing, education, talent development and social development.

“This measure will have multiplier effects that will create better job opportunities, improve the living standards of local folks, and to ensure business continuity for the good of the community.

“Even though our economy is expected to contract between 3.5 per cent and 5 per cent this year, we will continue to persevere while accepting the decline in tourism sector has spilled over effect on other services sectors, particularly affecting the transport and logistics, hotel and accommodations, wholesale and retail trade as well as food and beverages industries,” he remarked.

He said the tourism sector was among the worst hit by the Covid-19 pandemic where for the first nine months of this year, visitors’ arrivals had contracted by 64.1 per cent due to travel restrictions and closure of international border.

“Hence, efforts must be made to revive the sector and to render assistance to those who are involved in the industry,” he added.