Tuesday, August 9
You are at:Home»News»Brunei/Kalimantan»Metal object, said to be from rocket debris, found near Sarawak-West Kalimantan border 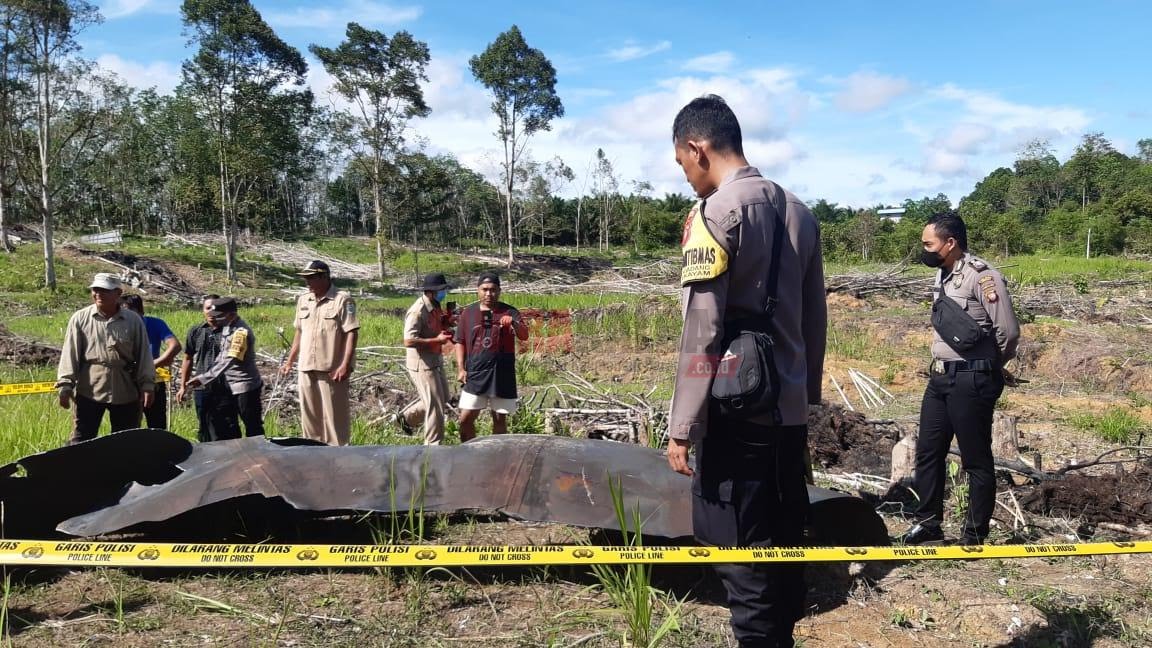 Indonesian police and villagers taking a closer look at the object discovered at Pengadang, a village in Sekayam District of the Sanggau Regency in West Kalimantan. A police line can be seen on the photo, indicating that the police have cordoned off the area. — Photo from Suara Kalbar

KUCHING (Aug 1): A large metal fragment, believed to be among the debris from China’s Long March 5B rocket, was discovered at a village on the Indonesian side of the Sarawak-West Kalimantan border early today.

Online portal Tribun Pontianak reported that the discovery was made at a new oil palm estate in Pengadang, a village in Sekayam District of the Kabupaten (Regency) of Sanggau.

Sekayam shares the border with the Tebedu District in the Serian Division of Sarawak.

Sanggau police chief AKBP Ade Kuncoro Ridwan was quoted as stating that a report about the find was lodged at Sekayam District police office at 8.30am (9.30am Malaysian time) today.

He said based on the information, Sekayam police joined the villagers in conducting a check on the site, where the object was found.

According to Ade Kuncoro, the metal piece measures around 5m long and 2m wide.

“We have cordoned off the site to prevent intruders from coming in.

“We strongly advise everyone to not approach the location due to suspected presence of radioactive substance in the object,” he said, adding that his team would also coordinate with the West Kalimantan police in handling this situation.

“For now, the origin of the object is not known for sure, but on Saturday night at 23.09pm (12.09am Malaysian time), some residents in Pengadang did hear a ‘loud roar from the sky’,” he said.

Tribun Pontianak has outlined a chronology of the incident, reporting that a resident named Yulius Talib was at his oil palm estate at around 5pm (local time) last Sunday (July 31) when he stumbled upon a large metal fragment on his land.

Suspecting it to be a part of the rocket debris, Yulius then informed his village chief and later, a police report was lodged this morning.

Yulius was quoted as saying that he was shocked to see the unidentified object in the middle of his estate.

In a separate report posted by another Indonesian news portal Suara Kalbar, it said that there were the numbers ‘84, 31, 75 and 5W’ visible on the object.

A YouTube video of the suspected fragment from the rocket debris found at the location has gone viral since this afternoon.

In the wee hours of Sunday, bright streaks of light were sighted over the sky in many parts of Sarawak, followed by a thunderous rumble.

Video recordings of this sighting had gone viral over social media and later on Sunday, the Malaysian Space Agency (MYSA) confirmed that the Chinese Long March 5B rocket was detected across the Malaysian airspace at 12.55am.

The rocket was launched from the Wenchang Spacecraft site in China on July 24 to send the 23,000kg Wentian module to the Tiangong Space Station.

In a statement on July 29, MYSA had said the re-entry of the rocket remnants was expected between July 30 and Aug 1.