Wednesday, October 27
You are at:Home»News»Sarawak»Crime rate in central Kuching down — CPS chief 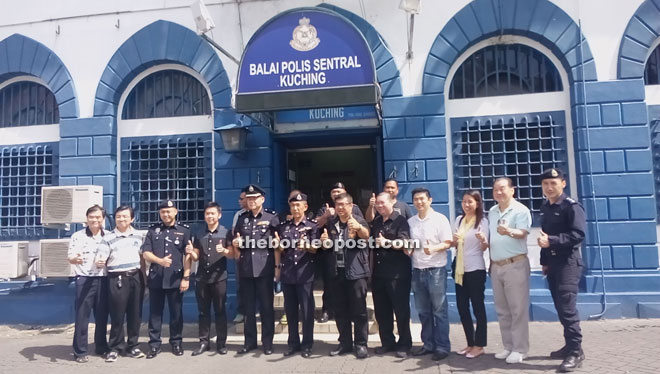 Pui (sixth right), Ismail (sixth left) and others giving the thumbs-up to cooperation between the community and the police after the dialogue.

KUCHING: A total of eight crime cases have been reported in central Kuching in the first nine months of this year, revealed Central Police Station (CPS) chief ASP Ricky Poh.

“The cases include four burglaries, one snatch theft, one motorcycle theft and two car thefts that happened around India Street, Gambir Street and Carpenter Street areas.

“The number indicated that the crime rate in central Kuching has reduced and is under control,” he said during a community policing dialogue with representatives of SUPP Kuching and Kuching Central Community Association at the central police station yesterday.

Meanwhile, Kuching deputy police chief Superintendent Ismail Mahmood pointed out that it was important for the public to work together with the police instead of finding fault with the force.

“We encourage the public to always come forward to report crimes, no matter how petty so that the police would be able to come up with crime prevention plans.

“The police have done many things as part of our policing duties. We hope the public will work with us to combat crimes instead of blaming us for not working. Don’t let one unfortunate incident on one day make the people forget that they have peace and security for the rest of the 364 days.

“We no longer wait around for people to report crimes to us, we have been going to the ground and working closely with local communities in our crime prevention programmes,” he said.

“We must cooperate and coexist with the authorities to bring crime rates down to the minimum so that this city will be a better place to live in and work in,” he said.