Friday, August 7
You are at:Home»News»Sabah»Atkinson Clock Tower Exhibition a hit 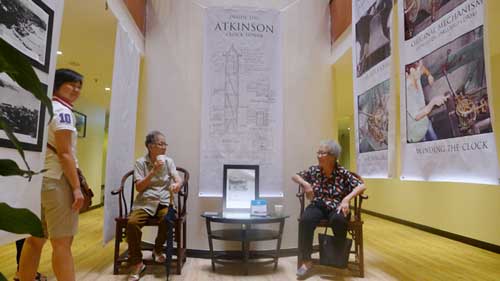 KOTA KINABALU: The Atkinson Clock Tower exhibition at Hotel Sixty3, Gaya Street here, in conjunction with the recent ‘Bonding With Gaya Street’ event has proven to be such a hit among locals and tourists that the exhibition has been extended until February 14.

The exhibition venue is located at the hotel’s first floor atrium, situated just opposite the Sabah Tourism Board building.

Among the highlights of the exhibition is a 48-foot long graphic mural of the Atkinson Clock Tower, sponsored by Hotel Sixty3 as well as numerous images and information of Kota Kinabalu’s oldest and most popular city landmark.

According to Richard Nelson Sokial, a local heritage advocator involved with the exhibition, the public response to the Atkinson Clock Tower exhibition had been very good, and by popular demand, the hotel’s management had kindly extended its goodwill and hospitality to host the exhibition for another two more days.

Curious members of the public have come steadily since Saturday to view the exhibition, which is one of the activities organised by the North Borneo History Enthusiasts (NBHE) for the recent ‘Bonding With Gaya Street’ event. The exhibition was put together by members of the Heritage Sabah group with the help of NBHE volunteers and the cooperation of Sabah Museum, Sabah State Archives, Sabah Information Department, town planning studies by AIA Consortium as well as photo contributions from private individuals.

Besides displaying rare photos showcasing the importance of the Atkinson Clock Tower as a city marker for more than 100 years, the exhibit features a 100-year old original railway sleeper used by the North Borneo Railways (now known as Sabah Railways), courtesy of Cap Kuda Coffee Company.   A visual multi-media display by various supporters of Heritage Sabah group’s Save Our Heritage Atkinson Clock Tower campaign is also on display which shows the younger generation’s appreciation of the clock tower as a legacy for their own generation in Sabah.

“Many members of the public are not even aware that the clock tower, built in 1905, still works in 2012 – and still emits chimes from its bell tower – despite its melodious sound being drowned by the busy traffic on Jalan Balai Polis,” Sokial said.

He added that “members of the public should definitely come to see this exhibit as a way of learning more about the heritage value of the Atkinson Clock Tower and why it is so important to preserve it in a pristine site. It is a chance to learn about KK city’s history and how this clock tower continues to contribute to the enrichment of Kota Kinabalu’s local community in these modern times”.