Saturday, August 15
You are at:Home»News»Sarawak»STB welcomes arrival of cruise ship 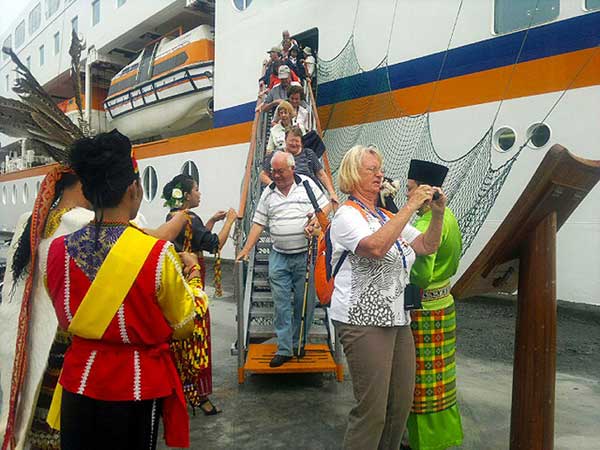 KUCHING: Sarawak Tourism Board welcomed the second arrival of a cruise ship in a month at Bintulu Port yesterday morning, making it the fifth arrival for this year so far.

The 15,000-tonne MS Columbus, the luxury cruise ship owned by the Hapag-Lloyd of Germany, arrived at Bintulu Port at 6:30am.

Sarawak Tourism Board officials from Miri, who organised a special traditional welcoming reception, greeted the 287 tourists.

Earlier this month on Feb 11, another cruise MS Pacific Venus from Japan arrived in Kuching and its 354 tourists and 208 crewmembers were greeted by STB Regional Marketing manager (UK & Europe) Maurice Balang with similar traditional reception party.

This is the third visit of the Pacific Venus to Kuching after earlier visits in 2000 and 2006. MS Pacific Venus is the 26,518-tonne luxury cruise ship operated by Japan Cruise Lines.

The ship caters specially to Japanese tourists and it features karaoke rooms, a spacious hall and observation lounge situated at the base of the tunnel. Pacific Venus is engaged in cruising around the world and can accommodate up to 696 passengers.

Passengers on MS Columbus will visit the historical Niah Cave and go on a tour around Bintulu town today.

Sarawak Tourism Board has been working with various government agencies, including the management of each port to ensure a safe and successful cruise arrival to the state.

“Improvement on the quality of services to tourists is one of the important aspects to help develop the tourism sector. This will attract more cruise arrivals in the future. It will also generate significant revenue for the tourism sector and contribute to the number of tourist arrivals to the state as a whole,” said Maurice Balang in the press release.

STB is looking forward to another arrival to Bintulu Port by MS Spirit of Adventure next month.

Previous ArticleSnowdan: Art of photography has endless possibilities
Next Article Vital for regional information to have presence on the Net, asserts Austrian professor