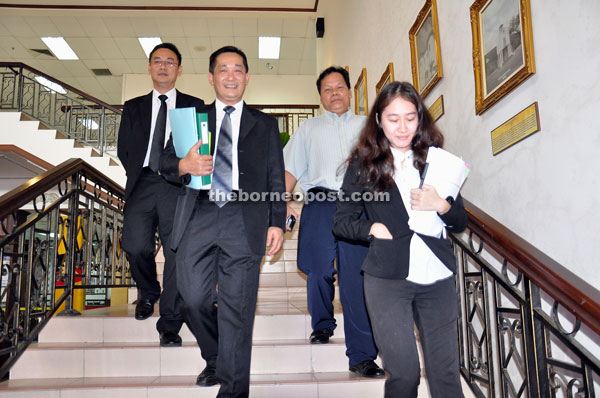 See (second left) together with Kho (left), Pauls (second right) and Jamilah leaving the courthouse after the court judgement yesterday. 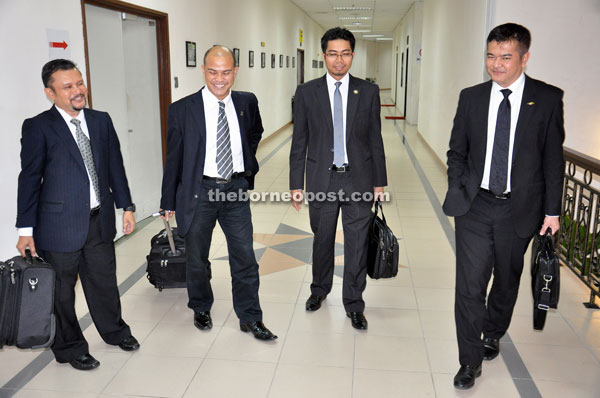 Justice Datuk Yew Jen Kie delivered her judgement in chamber after hearing arguments submitted from the applicants Batu Lintang assemblyman See Chee How and Pauls Baya from Baram and respondent, the EC on Feb 1.

See, when met after the court proceeding, said all three preliminary objections raised by the respondent and the state government namely: the applicants lack locus standi in filing this application, the application for judicial review being premature and questioning that the court had no jurisdiction over the delineation process were dismissed by the Court.

“The Court finds that this is not a frivolous application, that our contentions of non-disclosure and lack of detailed particulars (in the recommendations for constituency redelineation) in the notice published warrant hearing of argument at
the substantive stage,” he explained.

The judicial review application filed by See and Pauls sought for a declaration of the Court that the publication and notification of the EC on the delineation review did not comply with the provisions contained in the various Articles and 13th Schedule of the Federal Constitution and therefore null and void.

The Court has fixed March 19 for the case to be mentioned.

Meanwhile, Senior Federal Counsel Shamsul Bolhassan, who represented the Attorney-General Chambers said they would be filing their affidavit within two weeks to answer the arguments brought by the applicants, especially on the part that the notice was defective.

Shamsul explained that the leave application yesterday was actually a judicial review by itself, adding that it would be a separate matter whether or not the judicial review would be granted later on.

“Now the leave to file in the application for judicial review has been allowed. So we just wait for the outcome of the judicial review application, whether it is going to be granted or not, that is pending the decision of the Court later on,” he said.

EC legal advisor Azizan Md Arshad was also present at the Court proceeding yesterday. See represented himself and Pauls. He was assisted by Desmond Kho and Jamilah Baharuddin.

Previous Article‘Gunshot’ leaves Poslaju staff on edge
Next Article Najib: Govt to enhance efficiency of services for all communities