Thursday, February 2
You are at:Home»News»Sarawak»PRS to field a Kenyah if it gets Murum, assures Masing
For the freshest news, join The Borneo Post's Telegram Channel and The Borneo Post on Newswav. 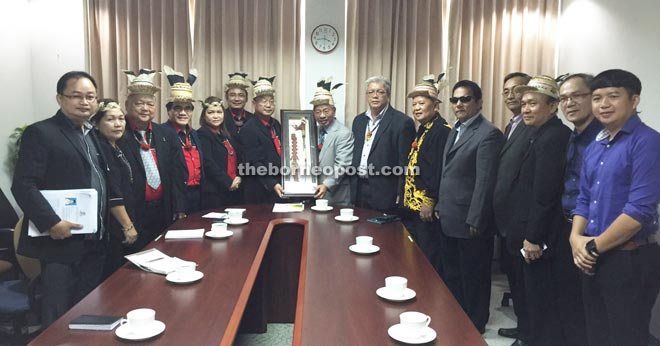 Masing (eighth left) receives a memento from Chuk Pai Ugon during the courtesy call. Bit is on the left.

KUCHING: Parti Rakyat Sarawak (PRS) will field a Kenyah in the new Murum state constituency should the party be allocated with it in the next state election.

During a courtesy call by Sarawak Kenyah National Association (PKKS) delegates on PRS president Tan Sri Datuk Amar Dr James Masing here yesterday, the latter assured the Kenyahs that PRS would pick one from their community should the party be given Murum.

All PKKS needed to do now was to give a few names to be assessed by the party before it was forwarded to the chief minister for a decision.

Masing said he was aware the Kenyahs in Belaga was eager to have a Kenyah elected representative.

“With a Kenyah elected representative, the Kenyahs can have the feeling of playing a greater role in the government’s decision-making processes. They will have a bigger voice then,” he said.

According to the PKKS delegates, headed by acting president Chuk Pai Ugon, the Kenyahs in Belaga were prone to contest against the Barisan Nasional (BN).

They hoped the decision by PRS to field a Kenyah would reverse this ‘trend’ as the Kenyahs merely wanted to have a bigger voice in the government.

Masing said PRS would fight to get the new seats of Murum and Bukit Goram.

“Murum and Bukit Goram belong to PRS. I will do all that I can to make sure they go to PRS.”

Murum is a seat carved out of Baleh and Belaga state constituencies.

The area will have about 7,454 voters, with the Kenyahs forming the majority.

During the courtesy call, the delegates discussed with Masing on education and political issues. They also touched on matters related to the Kenyahs.