Monday, August 10
You are at:Home»Business»BizHive»Bears still in control 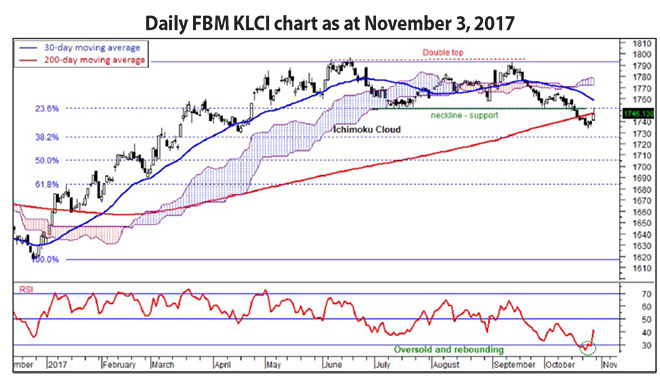 The market started on a bullish note last week but pulled back on lack of confidence as markets performances in the region were mixed. The benchmark FBM KLCI fell 0.3 per cent in a week to 1,740.93 points last Friday. I mentioned last week that the index is set to test the immediate resistance level at 1,750 points last week but seemed struggling to overcome this level despite testing it for three days.

Trading volume has increased last week and this indicates increasing selling pressure as the index fell. The average daily trading volume increased to 3.1 billion shares from 2.7 billion shares two weeks ago. However, the average daily trading value was firm at RM2.4 billion. This indicates lower-priced counters were the focus and these counters are normally traded by the retail market participants.

US dollar was firm last week. The US dollar index was unchanged at 94.9 points last Friday. The Malaysian ringgit marginally strengthened against the US dollar, from RM4.24 to RM4.23 to a US dollar.

On commodities, price of crude oil continued to increase on OPECs determination to lower oil output. However, gold (COMEX) was directionless last week and eventually fell 0.3 per cent in a week to US$ 1,270.20 an ounce last Friday. Crude oil (Brent) increased 2.6 per cent to US$62.09 per barrel, a 28-month high. Locally, crude palm oil futures declined 0.5 per cent in a week to RM2,804 per metric tonne on profit taking after a strong rally two weeks ago.

The FBM KLCI continued to buck the global markets performances bullish trend. The market is still bearish as the index failed to climb above the immediate resistance level at 1,750 points. The index tested this level three times in the past one week and this indicates that the resistance is strong. As we have mentioned in our previous articles, Sellers may be attracted to sell when the index rebounds to this resistance level.

The bearish momentum is gaining traction last week after a rebound two weeks ago. The RSI and Momentum Oscillator indicators were declining and the index is trading near the bottom bands of the Bollinger Bands indicator. Furthermore, the MACD indicator is declining and below its moving average.

The chart shows that the index is set to trend lower towards the next support level between 1,700 and 1,710 points as long as it stays below the immediate resistance level at 1,750 points.