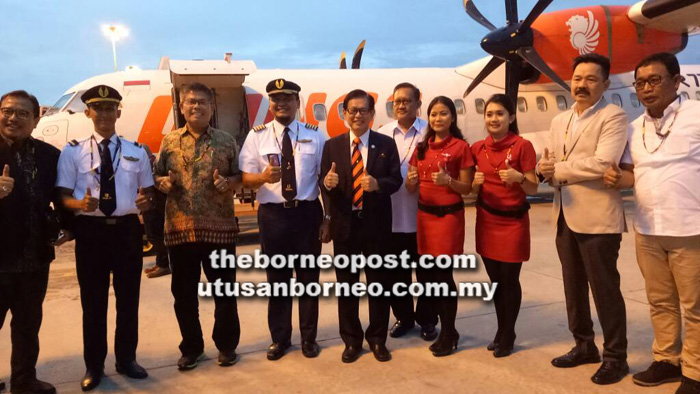 MIRI: This resort city welcomes Indonesian airlines, Wings Air and Malindo Air to open up more international routes that would enhance Miri towards becoming the northern gateway of Borneo.

According to Assistant Minister of Tourism, Arts and Culture Datuk Lee Kim Shin, there is good road connectivity linking Miri with Brunei and Sabah.

“I’ve a good discussion with lndonesian Ambassador to Malaysia His Excellency Rusdi Kirana to look at possibilities for Wings Air to fly (to Miri) from other towns in Indonesia such as Balikpapan.

“Balikpapan shares similar oil history with Miri and Brunei. I strongly think the next route for Wings Air to explore is Balikpapan to Miri (route),” he stated in a joint press conference on Wings Air inaugural flight from Pontianak to this city at Miri Airport’s VIP waiting room on Thursday.

On Malindo Air, Lee told reporters that Rusdi would talk to Malindo Air’s top management on having the ‘twin cities’ promotion by connecting Miri with other destinations like Bali and Jakarta.

“The state government is very happy to work with Malindo Air and we will look into all possibilities to make tourism a successful part of the state’s economic growth,” he added.

They comprised members of the Indonesian media, tour agents and several corporate figures.

The inaugural Pontianak-Miri flight marked the second international route for Wings Air after the Pontianak-Kuching one in January this year.

Wings Air is a subsidiary of Lion Air Group, which focuses on domestic routes and mainly serves as the feeder airline.