Tuesday, May 18
You are at:Home»Business»CIMB’s halal corridor initiative to tap into US$6.4 trillion global halal market 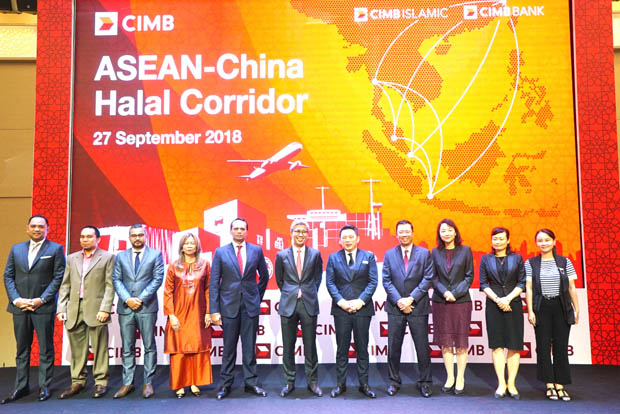 Darell (fifth left) and Zafrul Aziz (sixth left) accompanied by directors from the CIMB Group as well as key industry players from Jakim, Warees, Iskandar Halal Park, the Malaysia-China Chamber of Commerce and MASkargo during the launchind of the corridor.

The initiative is timely, with the global halal market at US$6.4 trillion, and estimated to grow at a cumulative annual growth rate of 7.3 per cent in the next five years.

The CIMB Asean-China Corridor also aims to leverage on the growing trade flow along the existing halal corridor, particularly with China’s halal sector expected to reach US$1.9 trillion by 2021, and a potential customer base of 266 million in Asean and China.

The initiative will focus on agribusiness, cosmetics, food and beverage, modest fashion and pharmaceuticals.

The event was also attended by 300 Halal business owners and CIMB customers.

Tengku Zafrul said, “As a leading Asean universal bank, CIMB is pleased to be a key driver of this initiative, to help existing and future customers tap into the expanding Asean-China Halal market by leveraging on existing halal database and CIMB’s strong Asean footprint.

“Malaysia’s leadership in the halal industry, our key industry players’ value proposition in their respective fields and CIMB’s expertise in Islamic finance globally are strong key success factors for this initiative.

“The CIMB Asean-China Halal Corridor initiative aims to facilitate a seamless trade journey to encourage entrepreneurship and enable more SMEs to tap into the huge potential of the Asean-China halal market.”

Chinese banks to be part of this initiative.