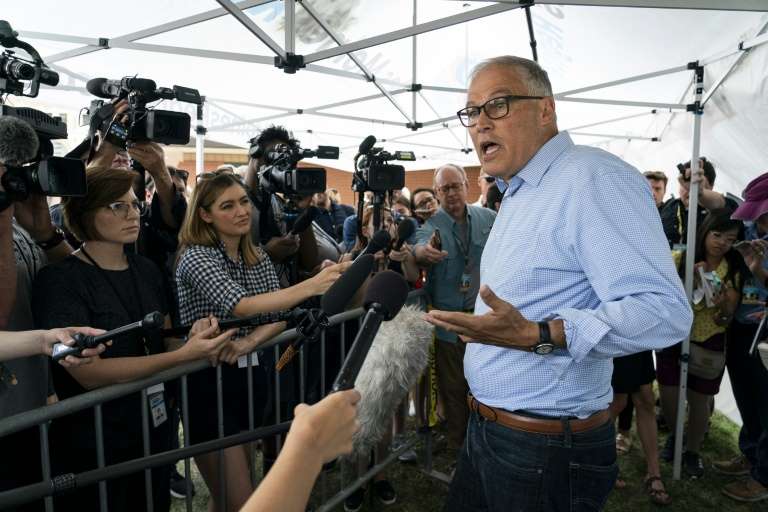 Rarely has a candidate gone far in a US presidential race highlighting a singular issue, but Democrat Jay Inslee is aiming to buck that trend with his commitment to tackling climate change.

Unless he does something to dramatically change his trajectory — he has less than one percent support in polls — Inslee, currently the governor of Washington state, likely will be an also-ran in the crowded race to decide who challenges President Donald Trump in 2020.

But what he has already achieved makes his candidacy worthy: launching a Democratic policy debate on climate change and how to prevent environmental disaster over the coming decades.

For Inslee and several other Democratic candidates, the science is clear: dramatic action over the next decade is needed to reduce carbon pollution, or irreparable harm will result.

“Unless we defeat the climate crisis, everything else we’ve worked on will be moot,” the square-jawed Inslee, 68, told voters at the Iowa State Fair.

Inslee is quick to highlight his economic accomplishments as governor. He has also savaged Trump as a “white supremacist” who is dividing Americans and is hurting farmers with his trade war with China.

But “climate change is the big banana, and we’ve got to make sure we take care of it,” he told AFP in an interview on the sidelines of a recent Iowa Democratic dinner featuring 20 of the party’s presidential hopefuls.

Trump, Inslee has stressed, has denied the climate crisis, ending important Obama-era regulations and pulling the United States out of the Paris climate accord.

And on Monday, Trump rolled back key provisions of the Endangered Species Act, the popular law that helped save the bald eagle and grizzly bear.

“I’ll stand up against him on his weakest point, which is his environmental degradation,” Inslee said.

US voters have rarely considered climate change a top-priority presidential election issue, but that is changing. An April CNN poll labeled it as the single most important issue to Democratic primary voters, topping health care.

As a candidate, Inslee has introduced a sweeping and sophisticated climate mission, which popular liberal congresswoman Alexandria Ocasio-Cortez praised as the “gold standard.”

It calls for zero carbon emissions across the economy within the next quarter century, including 100 percent carbon-neutral electricity and zero-emission new cars and buses by 2030.

The plan would require a staggering $9 trillion in investment and create eight million jobs. It would also likely encounter fierce resistance from the fossil fuel industry, and from many Republicans in Congress who oppose such drastic steps.

Inslee, who himself drives an electric car and wants to end the use of coal, has hammered away on the issue — most of his speaking time at the Democratic debates has addressed climate change.

And that likely has inspired leading Democratic candidates to release their own ambitious climate plans.

Inslee insists he is a multi-faceted candidate who can beat Trump “like a $2 mule” in the election.

He stood up to the president when he instituted a ban on arrivals from Muslim-majority countries, and blasted the administration’s family separations at the US-Mexico border as “the darkest moment” of Trump’s presidency.

He points to securing the largest teacher pay raise in the nation, expanding paid family leave and instituting what he says is the first public health option in the United States.

“If you do things to bring diversity to your community, to bring people together instead of intolerance, if you build a middle class instead of trickle down, just giving everything to the top one percent, if you take care of clean air and clean water, you have the biggest economic growth in America,” Inslee added.

“That’s what we’ve done in the state of Washington.”

And he explained climate change is not a singular issue, but one that affects health, national security, and the economy.

“We know the biggest job creator right now is in clean energy,” he said. – AFP