Monday, May 25
You are at:Home»News»Sabah»Astro Megastar champion owes success to family support 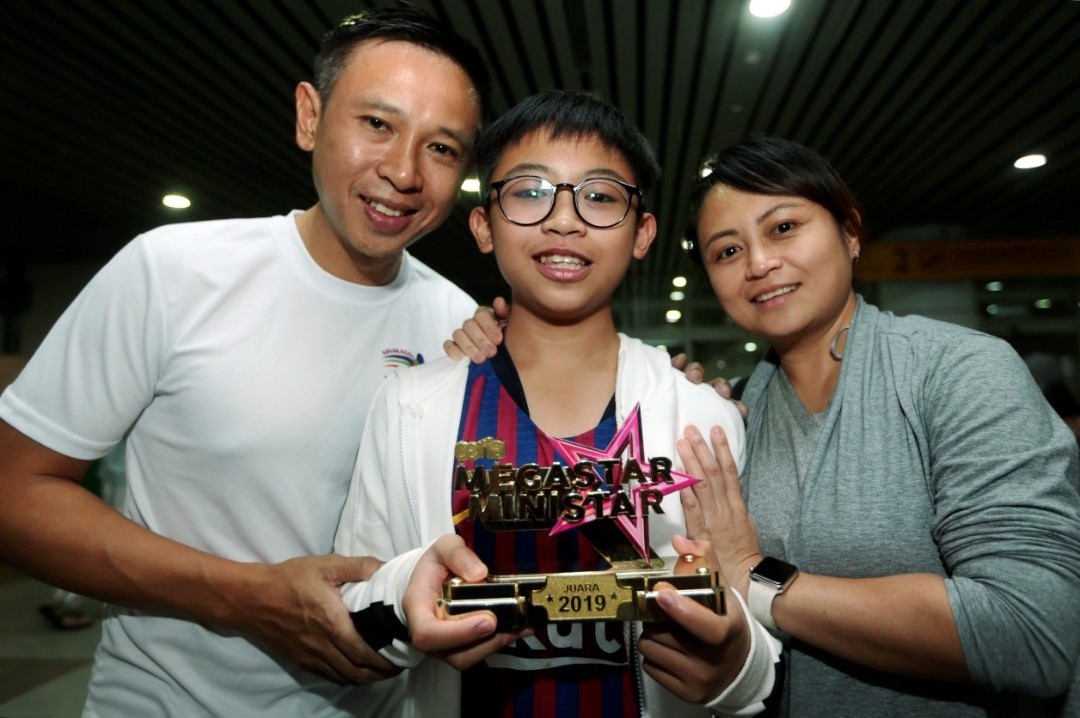 Eiffel with his parents Clarice and Rudy Paul Pailus after returning from the Megastar Ministar competition.

He said he owed his success to his highly supportive family, who not only encouraged him to join the competition in the first place, but even attended some of the concerts to watch his live performances, including the final round.

“My family has always been supportive of my singing career, even before I joined Megastar Ministar. Even when I was only competing locally, whether in our village or at the State level, my family would always be there to cheer me on,” he said.

In an exclusive interview with The Borneo Post, Kota Kinabalu High School (KK High) student Eiffel said his auntie was the one who first encouraged him to join singing competitions from as early as seven years old.

His mother, Clarice Antius, confirmed this and said her sister had always been the one nudging Eiffel towards pursuing his talent and hobby in singing.

According to her, Eiffel began attending vocal lessons after the 2016 State-level sugandoi, in which he was a finalist.     The next year, Eiffel placed first in the State-level Sugandoi Dazanak.

Also in 2017, the 13-year-old was named Best Participant in the Sabah-zone Bintang Kecil competition, followed by first runner-up in the national-level Bintang Kecil RTM.

This year, Eiffel came out on top in the Kota Kinabalu District Education Office-level solo singing competition, before claiming the top prize in Megastar Ministar recently.

However, his journey to victory was not a smooth one as he faced elimination and was given another chance by the Megastar Ministar judges, along with another contestant.

Eiffel said that was the most challenging experience he faced throughout the competition, as he was hopeful that he would be absorbed again into the competition.

“Truthfully, I was not devastated after being eliminated but I still hoped I could make my way back into the competition. Performing makes me feel nervous, but it’s also exhilarating.

“The fourth concert, during which I fought to be back in, was definitely the most challenging experience because it was not like any other concert. I had to fight to get back in,” said Eiffel.

It may also come as a surprise that the Megastar Ministar champion did not prepare extensively for the first audition in March. After some deliberation, Eiffel decided to attend the audition and picked a song he was comfortable with, which was ‘Jikalau Kau Cinta’ by Judika.

He was then contacted for further screening auditions before he was officially headed to the first concert, where he sang ‘Don’t Stop Believing’ by the group Journey.

As for his most valuable experience, Eiffel said the Megastar Ministar competition helped him grow and enhance his skills as a performer and not just a singer.

“Before this, I would only sing when I’m onstage, without much in the way of a stage performance. But after this experience, I know how to entertain the audience instead of just singing while standing still.

“That was definitely a valuable lesson which I would apply to future performances, so I could improve from before,” he said.

The eldest of three children, Eiffel has two younger sisters aged 12 and nine, who also sing and attend vocal classes together with him.

He also said his sisters dabbled in drawing as well as acting and dancing.

Eiffel was excited at the prospect of a home studio, which he said had been agreed upon if he won the recent competition. With the studio, he said he would record demos and promote them or send them to record labels.

However, he said his ambition was to become an electrical engineer but maintained that he would still sing.