Tuesday, October 19
You are at:Home»News»Court»RM2 million is like ‘pocket money’ to me, says Ku Nan 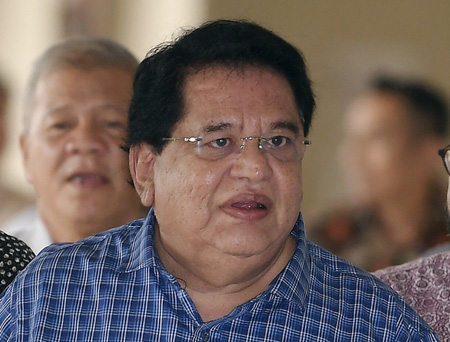 The Putrajaya MP who was testifying in his defence at his RM2 million graft trial, was responding to deputy public prosecutor (DPP) Julia Ibrahim’s question about whether the RM2 million that was given to him by businessman Tan Sri Chai Kin Kong, was considered valuable.

Julia: Was the RM2 million valuable to you?
Tengku Adnan: No it was not…RM2 million is just like my pocket money.

Julia: But it could be valuable to someone?

Tengku Adnan: I do not know.

The former minister also disagreed that he needed to declare the RM2 million to former Prime Minister Datuk Seri Najib Tun Razak as required by the code of ethics for members of the administration.

“It was not a gift for me or anyone. It was a political donation. Why should I report to the prime minister?,” he said.

Asked by Julia whether he had informed the UMNO Supreme Council or Najib, UMNO’s president at that time, about the RM2 million he had received from Chai, Tengku Adnan said the money had nothing to do with UMNO Headquarters (HQ).

“I was the Federal Territories UMNO head. Sometimes, I used my own money and I could ask many people to donate. Not just Tan Sri Chai,” he said.

Julia: I am putting it to you that the RM2 million was used for your own purpose.

Tengku Adnan: Disagree…I needed the money just for elections. I never asked for any contributions from the HQ, I stood on my own.

On Oct 14 last year, the High Court ordered Tengku Adnan to enter his defence, after finding that the prosecution had established a prima facie case against him.

Tengku Adnan, 69, was charged in his capacity as a public servant then, namely as Federal Territories Minister, to having accepted for himself, RM2 million from Chai via a Hong Leong Islamic Bank cheque belonging to Aset Kayamas Sdn Bhd which was later deposited into the CIMB Bank account of Tadmansori Holdings Sdn Bhd in which he had an interest, when it was known that Aset Kayamas had a connection with his official duties.

He is alleged to have committed the offence at the Pusat Bandar Damansara branch of CIMB Bank Berhad here on June 14, 2016.

The former minister was charged under Section 165 of the Penal Code, which carries a penalty of imprisonment of up to two years or a fine, or both, if convicted.