Sunday, August 1
You are at:Home»News»Nation»Military troops may be mobilised to ensure compliance of Movement Control Order 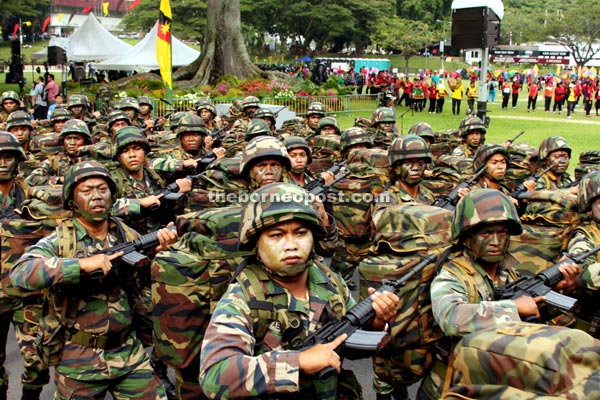 Military troops may be mobilised if the people’s level of compliance with the Movement Control Order introduced by the government to contain the spread of Covid-19, is deemed unsatisfactory. – File photo

PUTRAJAYA:  Military troops may be mobilised if the people’s level of compliance with the Movement Control Order introduced by the government to contain the spread of Covid-19, is deemed unsatisfactory.

Senior Minister Datuk Seri Ismail Sabri Yaakob said this was among the proposals brought up at the meeting of the newly-set up Special Ministerial Committee on the implementation of the order.

However, Ismail Sabri who is also Defence Minister, said the government, as of now, is fully confident that the police were capable of enforcing the order.

“As of now, I believe that it is unnecessary, but if there is no choice and if the compliance level remains at only 60 to 70 per cent, I believe there is a huge possibility that the military will be deployed.

“But having the authorities alone is not important…what’s more important is for all of us to conduct self-control and obey any instruction or order issued by the government,” he told a press conference after chairing the meeting of the newly-set up Special Ministerial Committee on the implementation of the order, here today.

The order, which is in force for 14 days from yesterday, among others, involves the closure of all government and private premises except for those providing essential services and all houses of worship and business premises except for supermarkets, wet markets, grocery shops and convenience stores selling daily necessities.

The government has also called on the public to stay at home and avoid going out during the order period to prevent the spread of Covid-19 in the country.

At present, Ismail Sabri said the police are taking a prudent approach in advising the public, but he did not rule out the possibility that legal action might have to be taken if the level of public compliance did not improve.

He said police roadblocks, which have been mounted at certain locations starting last night, would be continued.

“Maybe over these first three days, the police will begin with giving advice, but I believe they will opt for more stern actions if the people still hesitate to comply with the order,” he said, adding that 504 roadblocks were mounted nationwide last night, during which 6,135 vehicles were inspected.

Apart from the police, he said RELA personnel had also been deployed to enforce the order, especially in rural areas.

In another development, Ismail Sabri said the police were in the midst of tracking down about 4,000 Malaysians who attended the tabligh gathering at the Sri Petaling Mosque but yet to be tested for Covid-19.

On the report that there are 89 Malaysians currently in Indonesia to join a similar gathering, he said they all will be quarantined upon their return to Malaysia. – Bernama