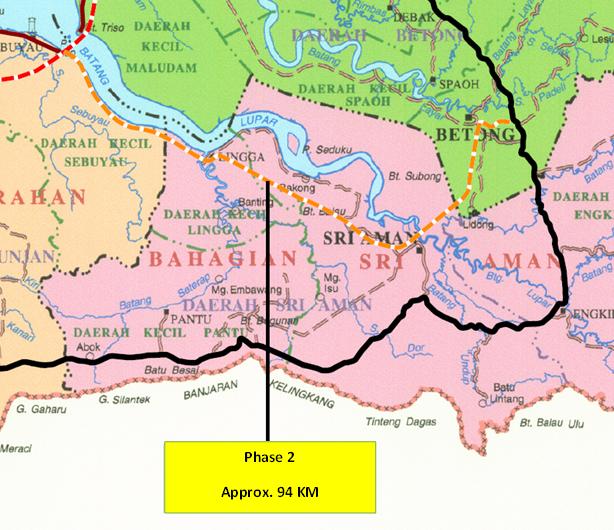 KUCHING: Parti Sarawak Bersatu (PSB) Youth chief Dr Johnichal Rayong has maintained that the proposed Second Trunk Road project is redundant and does not fully serve the needs of rural folks in the state.

He said he supports the statement made by PSB president Dato Sri Wong Soon Koh that doing away with the project will allow the state government to save RM6 billion and re-channel the funds more purposefully into other rural development projects.

“Is the Second Trunk Road more important than our fellow Sarawakians who do not have clean water, electricity or road access?” Rayong said in a statement yesterday.

The Engkilili assemblyman said this in response to Parti Rakyat Sarawak (PRS) Youth chief Datuk Snowdan Lawan who claimed that doing away with the Second Trunk Road project would deprive rural folks of road access.

According to Rayong, PSB is a party that supports rural development as it has the rural people at heart.

However, he stressed that the Sarawak government does not have the luxury of building the Second Trunk Road at the expense of other urgent needs in most rural parts in the state.

On Snowdan’s claim, Rayong said he believes the Balai Ringin assemblyman “does not know the alignment of the Second Trunk Road”.

“The Second Trunk Road is divided into three phases. Phase 1 consists of 112km starting from Samarahan running parallel to the existing Coastal Highway all the way to Roban Tow, with an exit link to the Pan Borneo Highway being that of Phase 2.

Rayong said it can be seen from the alignment that the proposed project is redundant and serves little purpose, let alone help the rural populace.

“The areas surrounding the Second Trunk Road alignment are already served by the Coastal Highway, which is also in the midst of being upgraded.”

Continuing on, he said the 94km-stretch under Phase 2 will branch off from the Phase 1 alignment just before the proposed Batang Lupar Bridge, and will connect Sebuyau to Sri Aman/Betong.

“Why is it a priority to have these roads going through no man’s land to reach areas already connected to main highways?

“The proposed alignment also mostly passes through flat and rolling terrain, swampy/peat soil areas and secondary forest, palm oil plantations and small scattered settlements. It will also be a great negative impact to the conservation of peat land,” he said.

However, Rayong said he agreed that Phase 3 of the proposed project could be maintained, as it involves the upgrading of the existing Jalan Kelupu and Jalan Tanjung Genting.  The alignment, he added, ends at Lanang Bridge and is connected to Sibu via existing R5 4-lane standard roads.

He went on to question the “real purpose and priority” of the planning and alignment of the Second Trunk Road, arguing that there is no acceptable brief for the urgent implementation of the project given that all these areas are already being serviced by either the Coastal Highway or the Pan Borneo Highway.

“On top of that, nearly 85 per cent of the total 237km of the three phases of the Second Trunk Road are also either damaging to environment or deliberately by design, conceived to be running through land of peat nature, thus adding to the increasing construction cost.

“All this and without proper representative studies on traffic volume to be able to justify this expenditure by the state.”

He further wondered whether the state could afford to construct another road under the current circumstances, particularly at a time when the completion of the existing Coastal Highway is ongoing, coupled with the accumulated expenditure committed by Chief Minister Datuk Patinggi Abang Johari Tun Openg which runs up to RM25 billion as mentioned in Budget 2020.

“Roads are important but we ought to prioritise. We must consider the numerous urgent needs for provisions of so many basic infrastructure projects which are required everywhere, particularly other rural areas.

“God willing, PSB with better planning and more efficient use of our financial resources will help transform our rural areas for the real benefit of our rural people. We must also bear in mind the state’s financial standing and budgetary constraints. Doing away with the construction of a redundant Second Trunk Road is a must. This would save the state government RM6 billion,” he reiterated.