Wednesday, July 8
You are at:Home»News»Business premises ordered to close, four others compounded for violating RMCO SOP 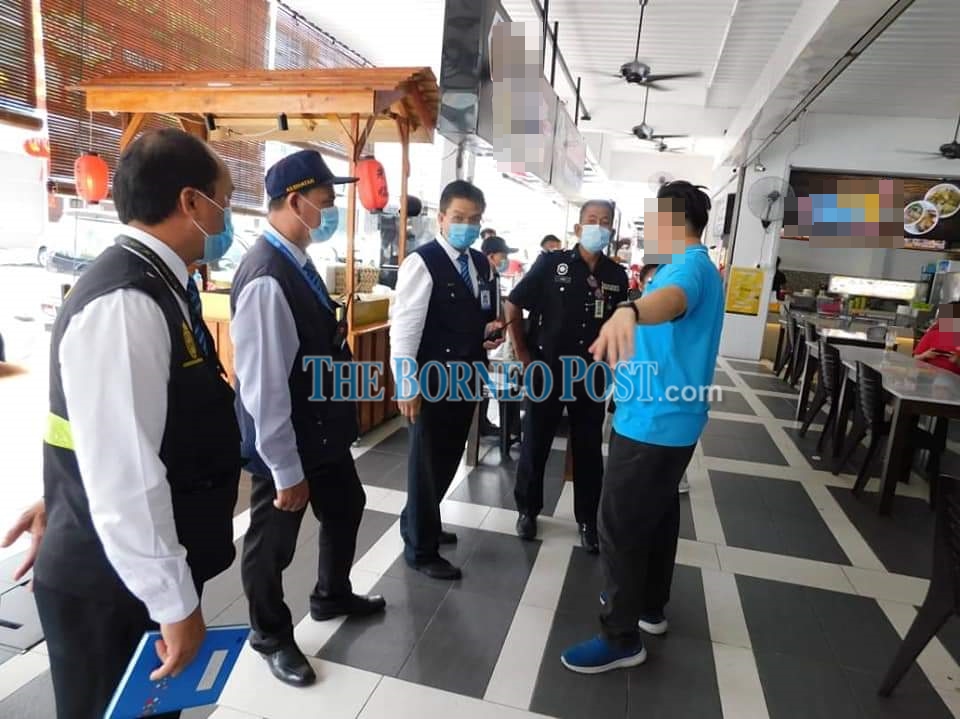 Billy (third left) and other members of the operation when checking on one of the eateries at Tabuan Tranquility.

KUCHING: A business premises was ordered to close, while four others were issued with compounds, following an operation carried out at Tabuan Tranquility yesterday to check on Recovery Movement Control Order (RMCO) compliance.

Sarawak chief environmental health officer Billy Sujang who led the operation, said a closure order was issued on one business premises, which was a retail outlet, for violating the standard operating procedures (SOP) for reopening of businesses such as not recording the temperatures of individuals entering the outlet.

He also said the other non-compliance by the outlet included not doing any cleaning, disinfecting nor sanitation as warranted in the SOP.

“As such, the outlet was served with a seven-day closure order. Though the closure order is for seven days, it can reopen sooner if we are satisfied that the proprietor had rectified the mistake in accordance with the SOP,” he said today.

Last Friday (June 19), a retail outlet at Bandar Riyal, Samarahan was the first business premises to be served with the closure order during an operation carried out there that day.

Billy also said four other premises were issued with compounds for various other SOP violations under the Prevention and Control of Infectious Diseases Regulations (Measures On The Carrying Out Of Activities In Infected Local Areas) 2020.

On the operation, Billy said it involved 25 personnel comprising 19 enforcement personnel from Ministry of Health, four police personnel from Kuching district police headquarters, and one personnel each from the armed forces and Civil Defence Force.

Together, they had checked on 33 premises in Tabuan Tranquility area comprising 15 retail outlets, 13 eateries, four barber shops and hair salons and one beauty salon starting 9.30am until 12 noon that day.

Regarding the smoking-related notices issued, he said six notices were issued to individuals who were found smoking in eatery which is an offence under Regulation 11(1)(d) of Control of Tobacco Products (Amendment) Regulations 2018.

Two notices were issued for offences under 12(1)(b) of the same Regulations, for proprietors found to provide ashtray and other items to encourage people to smoke in eatery, while two other notices were under Regulation 15 for possessing contraband cigarettes.

“The operation that we carried out was not just to check on SOP compliance during RMCO, but also to enforce the smoking ban in eateries which is still in force following its full implementation effective Jan 1 this year,” said Billy.

He added similar operations will be carried out in other parts in Sarawak soon during the current duration of RMCO which ends on August 31.

“I would like to thank those business proprietors who have complied with the SOP. Let us all work together to break the chain of transmission of Covid-19,” he said.

Previous ArticleGallantry award recipient Ngalinuh Bala to be given state funeral, says CP
Next Article SDMC urged to let students have meals in canteens instead of classrooms