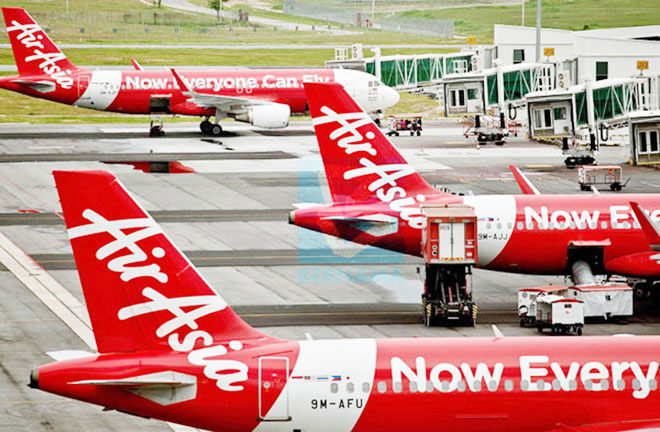 It said despite the significant challenges in the airline industry, the group reported a breakeven earnings before interest, taxes, depreciation and amortisation (EBITDA)(RM29,000) due to proactive capacity and cost management, coupled with a strong performance from the non-airline businesses.

The group’s loss was mainly due to RM270.1 million of fair value losses on derivatives, loss on settlement of fuel hedges of RM110.0 million and RM243.0 million additional depreciation and lease liabilities interest on operating lease aircraft, it said in a filing with Bursa Malaysia yesterday.

Meanwhile, its revenue eased to RM2.31 billion from RM2.73 billion a year earlier.

In a statement, the budget airline said despite kick-starting the year with a strong performance in January 2020, the uncertainty of the Covid-19 outbreak as well as increasing travel restrictions and border controls due to the pandemic had led to weaker air travel demand in February and March.

AirAsia Group president (airlines) Bo Lingam said the airline had restarted operations in phases for each of its operating markets and it was focusing domestically for now, before opening up to Asean and then the rest of Asia when border restrictions were lifted.

He said since beginning domestic operations in late April, the airline was encouraged by the increase in load factors week by week, and it aimed to increase flight frequencies to around 50 per cent its pre-Covid operations.
Currently, the airline is operating 191 daily flights across the region.

On the group’s outlook, AirAsia Group chief executive officer Tan Sri Tony Fernandes said the airline was taking advantage of this crisis to restructure the group into a leaner and tighter ship, which had resulted in positive strides, as it managed to bring cash expenses down by at least 50 per cent this year.

“On the airline operations, we are encouraged by the strong rebound demand seen since resuming operations in late April 2020 and we foresee this will continue in the coming months. Our innovative product, the AirAsia Unlimited Pass, sold out quickly. Competition is pricing rationally. This bodes well for us to compete in the post-Covid-19 world.

“Our past sale and leaseback deals serve to be beneficial in the current situation, as leasing provides us the flexibility and room for renegotiating contracts with our supportive lessors and suppliers,” he said.

Furthermore, he said, the group had also undertaken various initiatives to ensure sufficient working capital during these challenging times such as seeking payment deferrals from suppliers and lenders, restructuring a major portion of the fuel hedges, as well as shoring up its liquidity by applying for bank loans in its operating countries. – Bernama