Sunday, October 2
You are at:Home»News»BDDMC: Negative Covid-19 test result required for those entering Bintulu from April 5 to 18 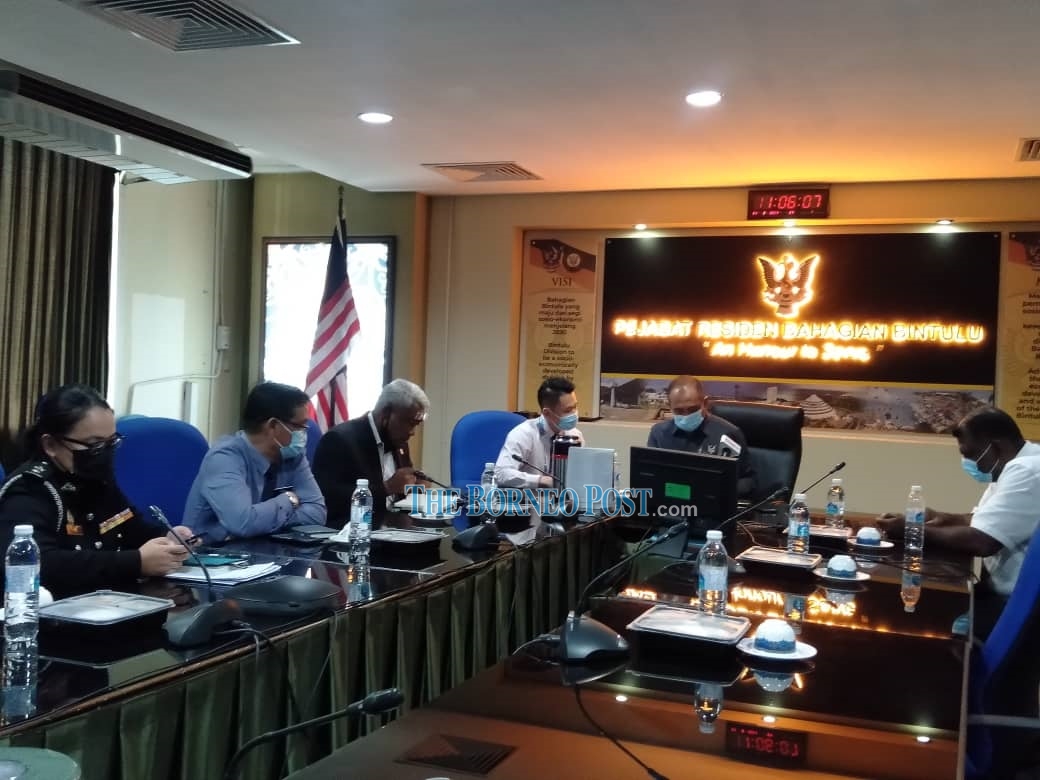 Jack (second right) is briefed by Dr Chung during the press conference.

BINTULU (March 31): Anyone who wants to enter Bintulu from April 5 to 18 must first be tested negative for Covid-19 under a new directive issued by the Bintulu Division Disaster Management Committee (BDDMC).

According to BDDMC chairman Jack Aman Luat, the screening ought to be conducted three days prior to the individuals’ arrival.

He said the swab test results must be submitted as a supporting document to obtain police permit to Bintulu zone.

Jack said failure to show these documents would result in their entry being denied by the police and the individuals concerned should be returned to their place of departure or be quarantined for two weeks here with all the swab cost and place of quarantine to be paid by the individuals.

“However, the exemption would be given under emergency entry and supporting documents for example for medical appointment and funeral must be submitted to the police when applying for permit.

“Those under essential services and frequently travelling to Bintulu would also be given relaxation and their swab test results valid for two weeks. They are also required to submit official letters from their employers,” Jack said during a press conference at Bintulu Resident Office today.

He said this drastic action must be taken following a thorough assessment by the Bintulu Health Office and BDDMC committee members in effort to curb the spread of Covid-19 in Bintulu.

“From the record, the statistics showed that most of the positive cases detected here are from those who were placed under mandatory quarantine. The infection is from other areas outside Bintulu,” said Jack.

He said the daily report also showed that Bintulu is always in top three in terms of positive cases and BDDMC has to move beyond ordinary measures to stop further infections in the community and at the workplace.

He added based on the data from the Ministry of Health, most of the positive cases detected from the quarantine centres here were asymptomatic cases and it was difficult to identify those who were infected.

Jack said this mandatory requirement was enforced simultaneously with the reopening of school and hopefully, this movement restriction from outside Bintulu will be able to flatten the curve of infection in the community.

In the meantime, he said to enhance the standard operating procedure (SOP) enforcement and to ensure more focus to be taken by the enforcement agencies on the ground, BDDMC has introduced the zoning system and identified 36 zones in Bintulu.

“Bintulu is a vast area and it create difficulty for enforcement agencies to cover all, for example for targeted screening and lockdown but with this zoning, the enforcement will be more focus on SOP monitoring,” he added.