Wednesday, July 28
You are at:Home»Features»Powering caregiving with unconditional love 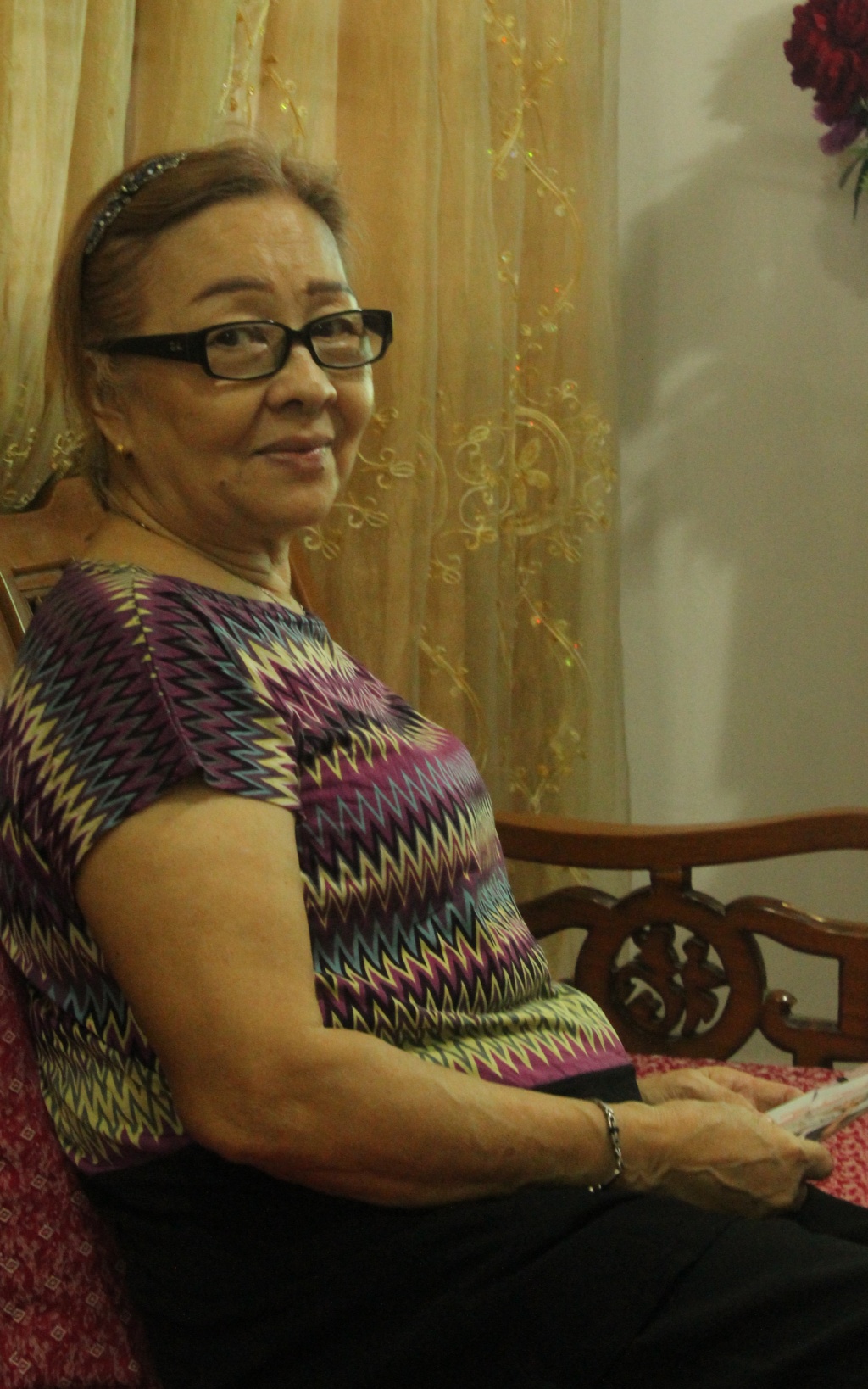 Mody has emerged a wiser and patient person who is more resilient to facing pains and sufferings.

MODY Yot, a woman in her mid-60s with a tough demeanour, sat patiently and caringly next to her paralysed mother at the hospital ward. The caring routine of 23 years saw her feeding her mother, changing her garments and washing her. Every visitation, irrespective of day or night, at the ward would last many hours. She had become a familiar figure to doctors and nurses on the floor.

Mody’s mother, Doreen Yot, a retired midwife, was a severely-impaired stroke survivor and had been in and out of hospital since she first suffered from the condition in 1997 at the age of 66. The first stroke had left her paralysed on one side of her body for a number of years. Mody was told that her mother did not have long to live.

She missed her mother of days past and was hoping for a miracle. She would go to any length to assist her mother in regaining her ability to walk again. She hired a massage therapist to massage her mother three times a week. The treatment would extend for 15 years. Although the massage helped to improve her blood circulation, her condition did not get better. She then had a second stroke, rendering her completely paralysed.

Fast forward – Doreen never recovered, yet she lived up to a ripe age of 90 albeit in a deteriorating state throughout the years. Her passing in August 2020 marked 23 years of Mody’s life as a caregiver to her mother. Mody looks at some of her mother’s old photographs in reminiscence of the happy days when Doreen was well – the years of her being a caring and loving human being.

Mody could not help but smile as she recalled those years of providing care.

She could not believe that she had been there for 23 years. Those years of self-sacrifice were filled with toil, tears, and sweat.

Patience would be required in caring for a parent who had been permanently paralysed for such a long time.

Mody learned to be more patient during those difficult years.

“It’s the same routine every day,” she said.

Even being patient took a lot of willpower on her part. The circumstances had forced her into a situation from which she could not walk away, a scenario in which she had to make herself accessible to someone who required long-term care and would never be able to recover. 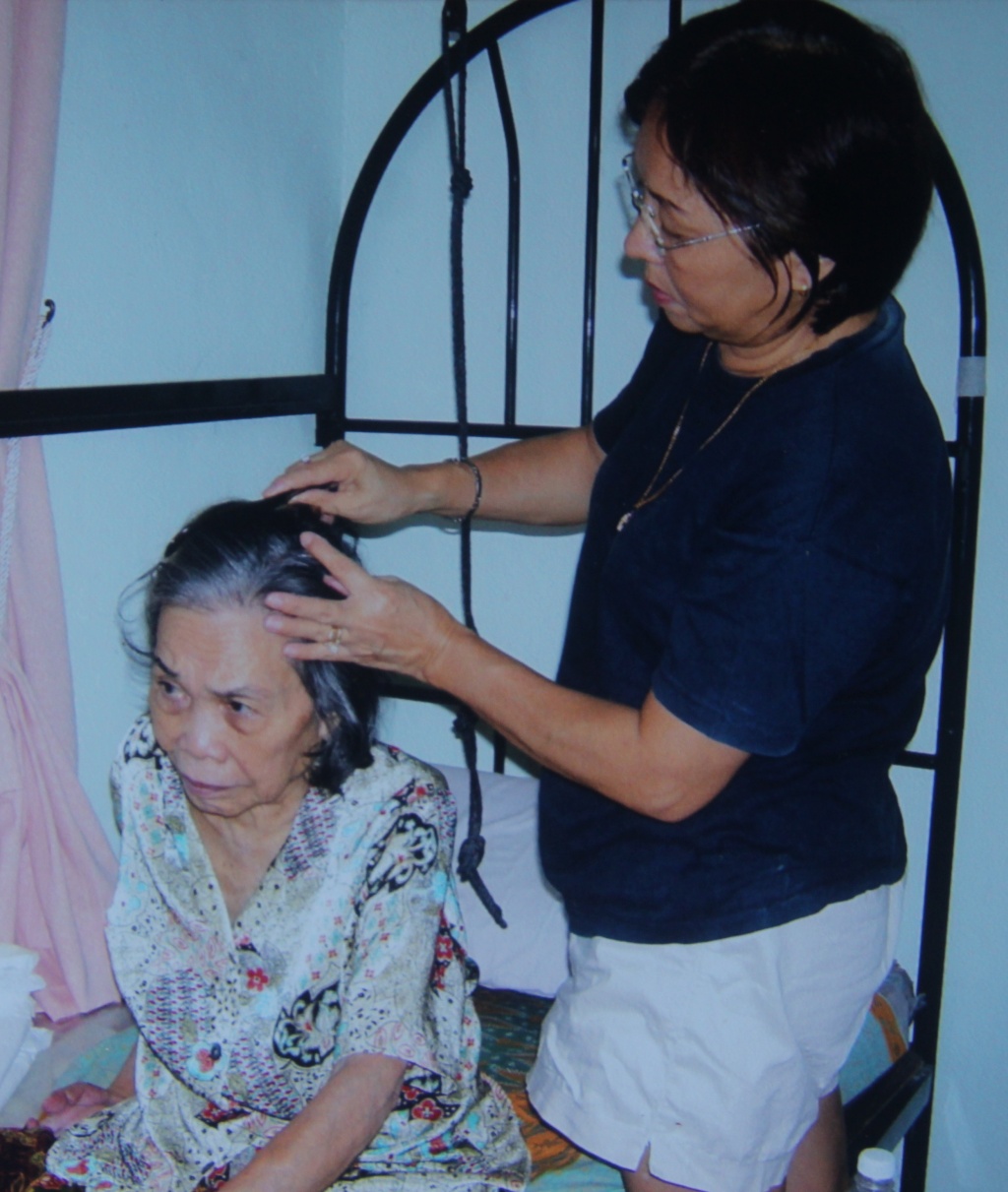 Mody attending to her mother before her second stroke some 20 years ago.

Mody could not remember a time when caring was easier. It was difficult at first because she had to learn how to hone her skills from scratch. And it was tough even from then on when the ‘heavy duty job’ became a daily responsibility.

She recalled a time when her mother had diarrhoea every day for a few months while she was still preparing for the dreaded task.

“It was not long after her first stroke. She was still hefty at the time, and I could only clean her in her own bed due to her size. The diarrhoea was so awful that I remember cleaning her up to five times a day with the help of my father and my husband, depending on his availability because he was working with the police at the time.

“As the primary caregiver, I must admit that it was more difficult for me.”

Caring for a parent gone paralysed was not part of Mody’s dream, much less for a long period of time.

She yearned for her old life. Her mother was running a grocery business with her husband at Sungei Tanju in Asajaya, where they were originally from, before the stroke.

The former midwife was a hardworking lady. She would be in the farm when she was not looking after the store. Mody, a mother of three young children aged from nine to 13 years old, at the time did not hesitate to bring her stroke-stricken mother and father to live with her. Being the only daughter besides a brother, she took it upon herself to care for her mother no matter what the cost.

Parenting her disabled mother was a completely different experience from parenting her young children.

“All of a sudden, I was caring for somebody invalid, which was a major disruption to my former routine life; a position that I never imagined would persist for such a long period. “The only days-off I had was when my husband and I took a vacation to Sabah after two decades of caregiving – thanks to my brother who was able to look after our mother during my short absence,” Mody recalled.

For 23 long years, Mody’s life had been shaped and influenced by the time spent in caring for her mother. The daughter treasured the few moments when her mother’s face lit up with joy, although she shared her anguish equally in the moments when she was physically suffering. Her mother was on nose-feeding tube for the last eight years of her life.

“I sobbed many quiet tears as I noticed her frail condition, her thinning legs (and) weary eyes. To see her lying in bed day and night and devoid of a life was painful.

“I would speak to her, although she could no longer understand speeches or utter words.

“When the burden of caring got heavier, I would ask questions:

“I felt a brief sense of relief by just asking, though I knew I would not get a reply.

“I spoke to myself a lot. It made me feel better. It was like squeezing out all the frustrations, pain and anger in me. I was often reminded not to vent some of those pent-up feelings on my poor mother though I could not help it sometimes. It was not her but the infirmity that was almost beyond my capacity to handle.

Nonetheless, it was not all pain and depression. The children were a source of comfort and inspiration to Mody, and looking after them during their growing-up years was not as stressful as looking after a bedridden mother.

As a mother herself, Mody understood the meaning of selflessness only to realise that she learned it better whilst giving care to a mother who would never get better. And yes, as the saying implies, it remains true that not all adult children are prepared to go through the highs and lows of giving care to their parents when the time comes.

The case of Mody vis-à-vis her mother points to the grim reality of this. It is a huge responsibility taking care of a paralysed adult person with a deteriorating condition – it calls for perseverance and a lot of sacrifices.

There was not a single day that the dedicated caregiver could be spared from the tasks of caregiving, which she juggled with household chores.

There were soiled bed sheets to clean every day. The dirty beddings had to be soaked in the laundry mixture for hours before being scrubbed and washed thoroughly by hand.

The process was always tedious because she was always determined to get rid of the stubborn stains and all the unpleasant smells.

“The word ‘tired’ was not in my dictionary – you couldn’t say no even if you’re physically unwell. I could ignore most of the household chores, but not a life that was dependent on me. While my husband and the children were very cooperative, I still had to be up for the essential needs,” said Mody.

She missed her previous life when things were perfect. How she wished she could spend more time with her family like she used to do or catch up with friends and relatives or accompany her husband Philip, who is a music enthusiast, to a jam session.

Even to attend a relative’s wedding or funeral would take a lot of efforts. She had to work against the clock to make sure that everything was done for her mother before she could leave the house.

Coming back from the function was just as punishing.

Mody’s source of survival in all those turbulent years was God. When she felt down, she remembered that God was in full control and her strength was renewed. She learned that in caring for her mother, she should not attempt to be perfect all the time. She could only give her best and leave the rest to God. She filled the little breaks she had with handwork and found joy in making flowers from recycled material and decorating bottles with beads.

Those were some of the things that kept her going.

Mody would make it a point to spend quality time with her family whenever she could and she would do the same with her mother. She would stroke her hair gently. Often, it brought back fond memories of the happy days when Doreen was well, the years of her being a caring and loving human being.

Doreen slipped away on the evening of Aug 30, 2020. She developed pneumonia and breathed her last shortly after she was brought to the hospital. 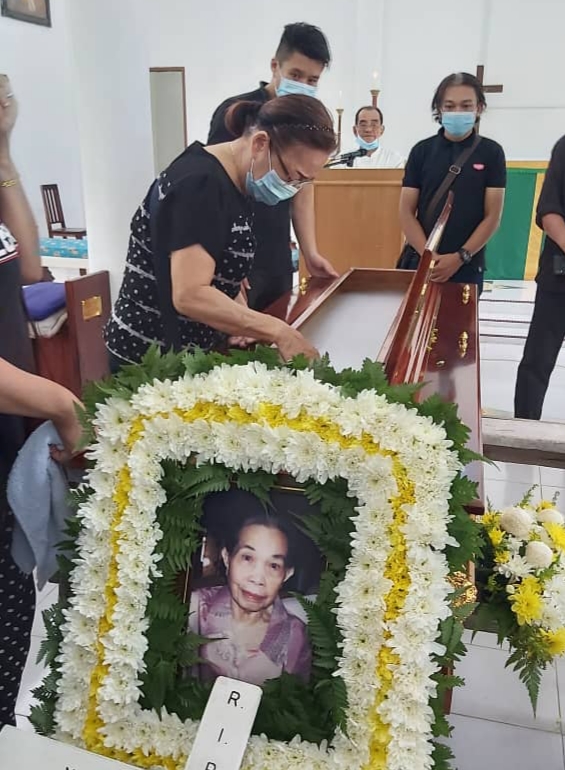 Mody was saddened by her mother’s demise, but she was also relieved that her mother did not have to suffer anymore. For all the pains and overwhelming concerns, she had done the right thing for her mother. She could not have done otherwise simply because she cared.

After her mother’s death, not a day passed without Mody going to her mother’s room even for a brief moment. It would take a while for her to adjust to the new changes and the significant amount of time she has now.

As much a path of endearing love and care, the 23 years have been a learning curve for Mody, who has grown to understand compassion and altruism.

She has emerged a wiser and patient person who is more resilient to facing pains and sufferings.